The hostname is the most convenient and most easy-to-remember way for identifying a system. Let’s dig more into the Hostnames. What is a Hostname, what are the types of Hostname, how can we change a hostname, and what are the rules to keep in mind while changing a hostname?

What is a Hostname?

A hostname, in simple words, is the name of the machine or server on the network. It is also used as a computer identifier, so it is better to have a unique hostname, and it can easily be distinguished from other systems on the network.

Simultaneously, instead of naming a machine for identification in the network, the hostname is set to ease the user or network administrator. By looking at the IP address of a system, it becomes harsh to identify the right machine while hostname makes this hassle easy.

The host name is often got confused with the domain name, but they are different. In the above-provided example, the server name is the hostname, while the example is the domain name, and lastly, com is the TLD(Top Level Domain).

After understanding the core concepts of hostname, let’s learn and understand the types of Hostname.

There are basically three types of hostnames.

The most basic and traditional hostname can be set by the user and used to identify itself among other server machines in the network. This static hostname is stored in the /etc/hostname file.

As it is in its name, this hostname is used for presenting a more user-friendly hostname to the user because it is free from UTF-8 hostname and allows non-standard characters.

The Linux kernel maintains this transient hostname, and it can be changed after a reboot by the DNS server or DHCP.

Rules to name a Hostname

While setting up and naming a hostname, there are some rules that we have to keep in mind:

Alright, after understanding hostname, its types, and rules to name a hostname, let’s get into some practical stuff and learn to show and change the hostname using several methods in CentOS 8.

The current hostname of the system in any Linux-based Operating system can be seen using the hostname, or hostnamectl commands can be used.

Alternatively, you can also use the hostnamectl command for getting the details about the hostname:

Just provide the hostname that you want to set after the set-hostname in the above command, and the hostname will be changed after a reboot.

Since we discussed three types of hostname, let’s learn how to change static, pretty, and transient hostname in CentOS 8 Operating system.

To set a static hostname in CentOS 8 OS, you can use the hostnamectl command, and you just need to add –static flag followed the new hostname as shown below:

In the above command, provide the hostname of your desire at the place of new-hostname, and do not forget to mention the –static flag to set the static hostname on the CentOS 8 Operating system.

For setting up or changing the transient hostname of the CentOS 8 Operating system, use the –transient flag after writing the hostname in the hostname ctl command as shown below:

To view the transient hostname, type the command:

Verify and apply the new Hostname

To verify the changed hostname, execute the hostnamectl command:

To apply the hostname changes, rebooting a system is required. To reboot:

There is another way to change the Hostname. We can do this by editing the file /etc/hostname with a text editor such as vi or nano. 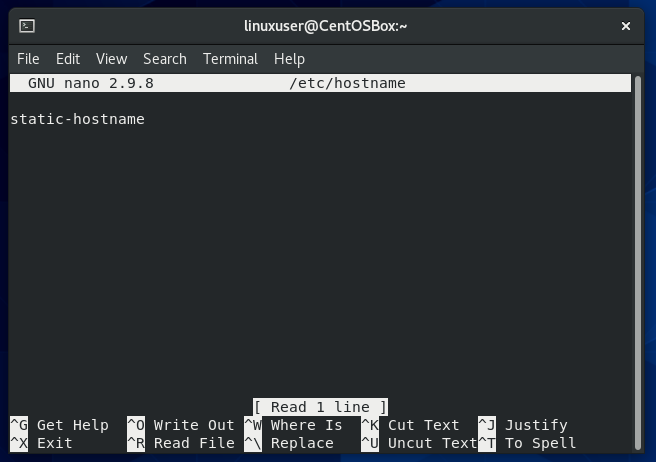 As you can see in the above-attached screenshot, we have just one line in this file, and that line contains the machine’s hostname only. 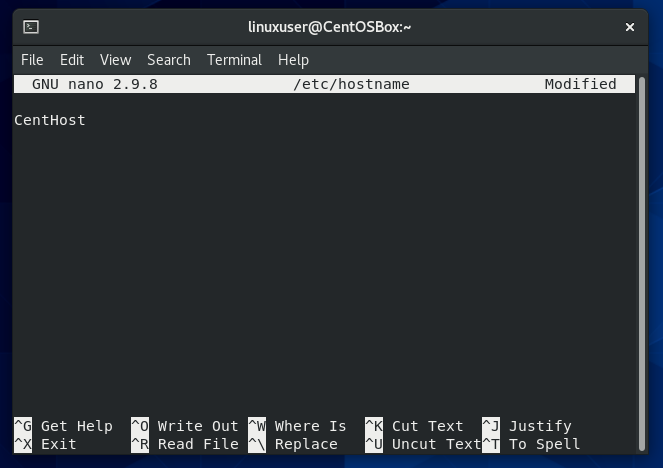 So, just change this hostname that you want to set and save the file using keyboard shortcut CTRL+S and exit from the nano editor by pressing CTRL+X. 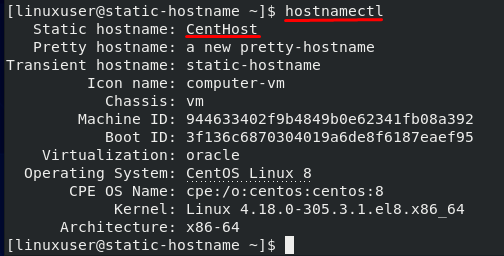 The changed hostname is displayed in the output information of the above command.

NMTUI abbreviation of Network Manager text User Interface is a command-line tool used for performing network management-related tasks. It can be used for interacting with NetworkManager and changing the hostname from the terminal. It comes pre-installed in the CentOS 8 operating system and can be used by directly executing the NMTUI command in the terminal.

To launch the NMTUI tool, execute the simple command given below: 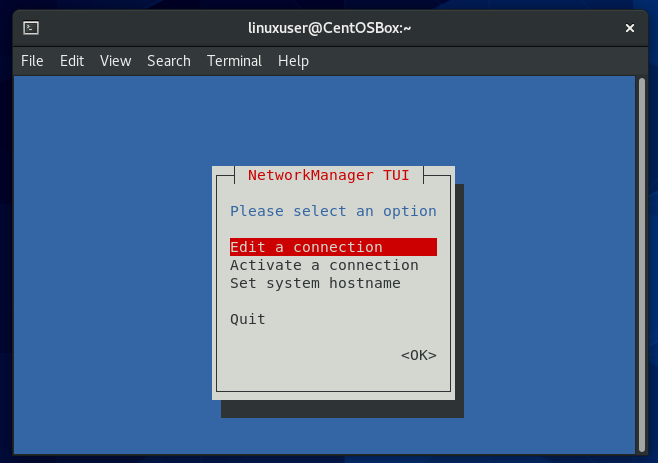 In the NMTUI tool, you can use arrow keys to navigate between the options shown: 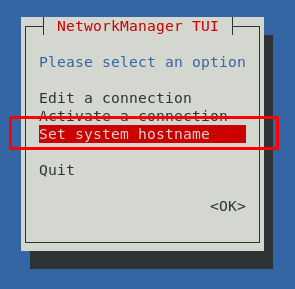 Go to the set system hostname option and hit Enter:

In the Input field appeared, type the hostname that you want to set and hit Enter: 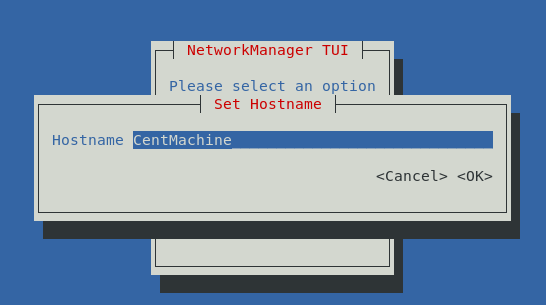 Hit Enter once again to confirm the hostname change:

In the Main menu of NMTUI, press the Esc key to get back to the terminal:

For the modifications to take impact, restarting of the systemd-hostname service is needed, and you can do so by executing the command:

After restarting the systemd-hostnamed service, the hostname will get changed, and it  can be verified by executing the hostnamectl command:

You can witness the changed, new hostname using the NMTUI command-line tool in CentOS 8.

Changing the machine’s hostname helps differentiate and identify a machine from other machines in a network.