The sudoers file is the file in Linux-based Operating systems, which is used to grant users some special administrative rights and execute the system commands. This tutorial will add a user to sudoers in CentOS 8, which is the latest CentOS 8 distribution.Sudo is one of the most potent commands available on Linux. It enables a user to perform administrative tasks like a root user.

There are two different ways an existing user can be added to sudoers.

Adding a User to the Sudo group

Adding a User to Sudoers file

We can use the method to give sudo privileges to an already existing user by adding them to the sudoers file. This file has the information dictating which user or group gets sudo privileges. It also defines the level of privileges the user or a group gets.

Well, we can also give a new user sudo privileges while creating their profile.

Let’s begin and learn how to add a user to the sudo group.

Add a user to the Sudo Group in the Sudoers File

The quickest way to grant a user sudo rights is by adding them to the “wheel” group. The sudo privileges of the members of this group are sufficient in most use cases. The members are asked to verify themselves by inputting their passwords in case they use sudo commands.

To add a user to the sudo group, input the command “usermod -aG wheel” followed by the username in the Linux terminal as a root user or a user with sudo privileges.

As an example, we will use the username “test-user”:

Once you have changed the group of the test-user to the wheel group, log in as the test user by executing the command typed below:

After logging in, verify sudo privileges by running the command given below:

That’s it. The user now has sudo privileges.

If you get a notification like “user is not in the sudoers file,” the process was unsuccessful, and the user did not get any sudo privileges. Please repeat the process again.

Adding a user to the Sudoers file

The default location of the sudoers file in CentOS 8 is /etc/sudoers. This file defines the users who get administrative rights and the commands they can run. A user can be given customized access to commands if they’re added to this file. You can also modify the security policies of the user by adding them to this file.

However, you should never change the sudoers file yourself, as it can get you locked out of your host if you leave any errors in the file.

We will use the nano editor to open the /etc/sudoers file to change sudoers files.

Open the /etc/sudoers file by executing the command mentioned below: 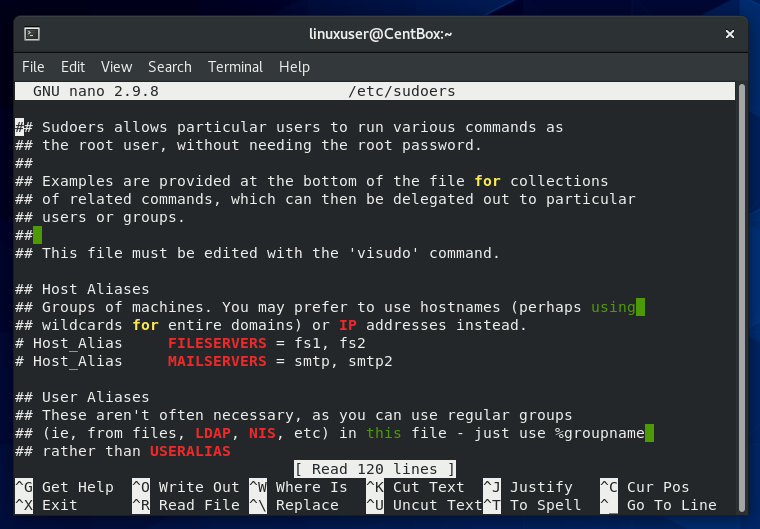 Scroll down to find the user privilege specification section and add the following line: 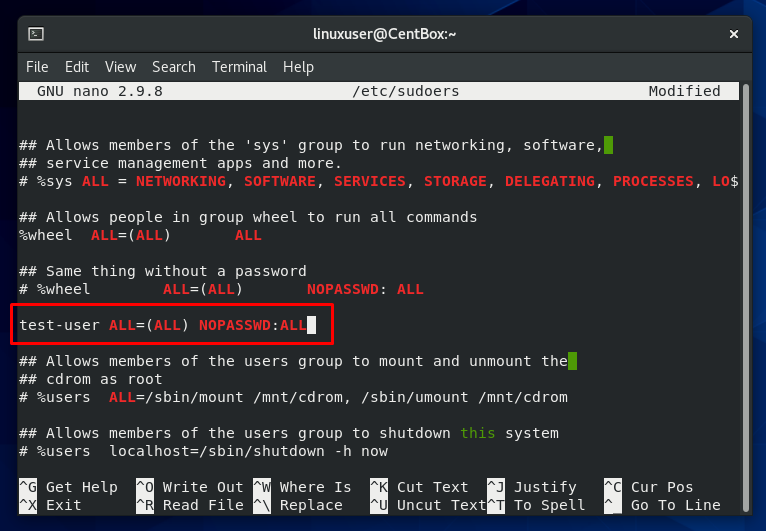 Remember to replace test-user with actual username to whom you want to grant sudo privileges.

You have allowed the user to run sudo commands without password authentication by adding the line above. You can grant different levels of sudo privileges by inputting different commands.

You can give sudo privileges to a user while creating their profile. To make a new user, run the following command:

Use the “passwd” command to set a new password for the user.

Now add the user in the “wheel” Group by running the command:

The new user now has full sudo access. To verify the users’ sudo access, follow the steps mentioned in the “Adding User to the Sudo Group in the Sudoers File” section.

Adding User to the Sudo Group in the Sudoers File was the first method we learned. This is the quickest and easiest method.

The second method, “Adding the user to the sudoers file,” gives you more control over the level of privilege you want to grant to a specific user. Moreover, we also learned how we could give a new user sudo privileges.