This article will list open source RSS clients for Linux desktops. Most of these feed readers come with a multi-pane layout, commonly seen in Thunderbird email client for desktop PCs.

QuiteRSS is a free, open source, and cross-platform RSS reader developed using Qt libraries. It features a multi-pane layout that can neatly categorize feeds and their content into separate panes. It comes with a Webkit based embedded browser, mainly used for rendering articles under individual feeds. Other main features of QuiteRSS include feed filters, ad-blocker, proxy settings, tabbed browsing, desktop notifications, system tray applets, importing and exporting of feeds, and so on. 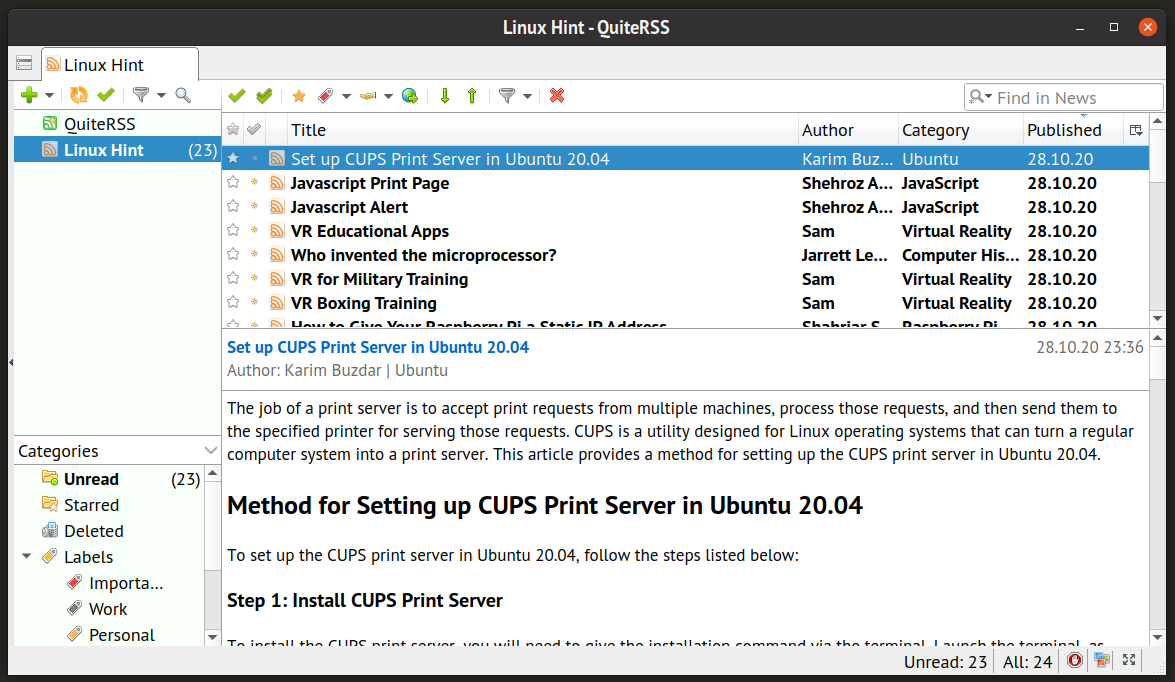 To install QuiteRSS in Ubuntu, run the command below:

Liferea is a free and open source RSS reader capable of fetching full content of articles for offline reading. It can also sync with other web based feed services, including your own self-hosted, cloud based feed readers. Similar to QuiteRSS, Liferea features a multi-pane layout for faster reading and better management of feeds and subscriptions. Liferea also has built-in support for podcast feeds. 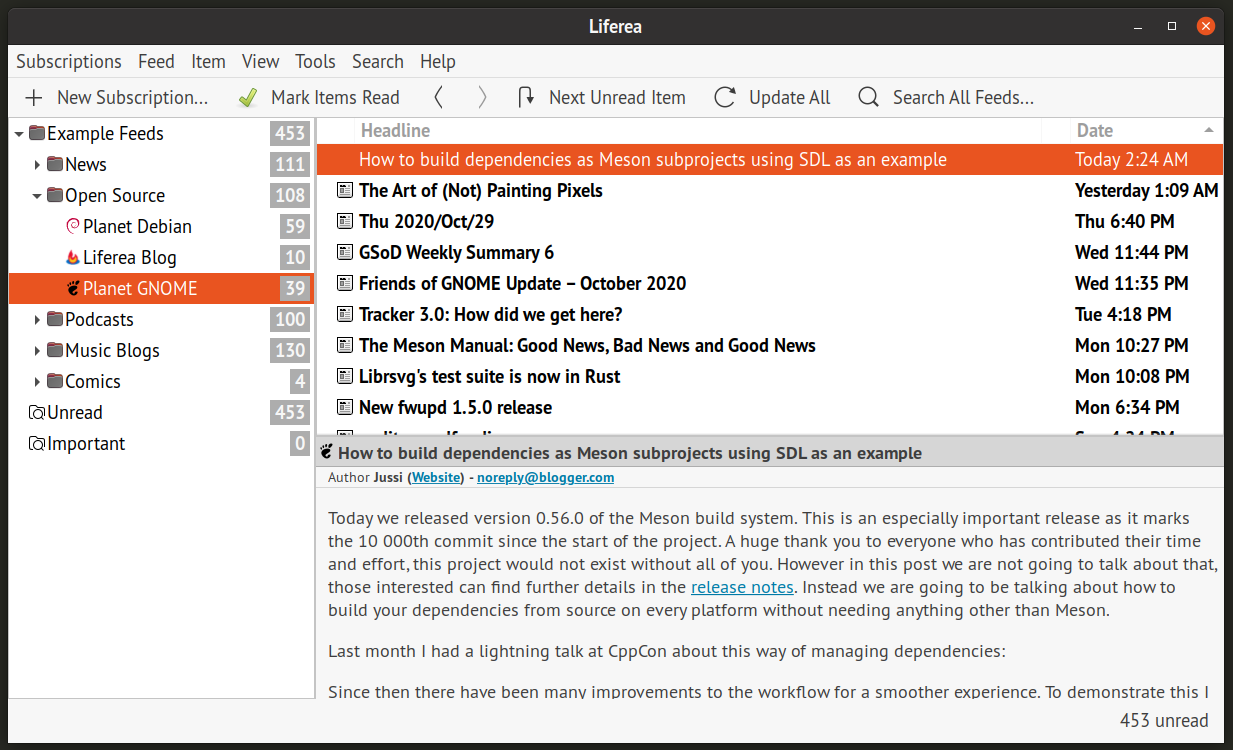 To install Liferea in Ubuntu, use the following command:

Liferea can be installed in other Linux distributions by following instructions available here.

FeedReader is a free and open source RSS client featuring a modern user interface made in GTK3. It can work with local RSS feeds added manually by users or it can sync with numerous third party web applications that provide RSS subscription management services. You can also configure it to work with your own self hosted solutions. Other features of FeedReader include support for rendering responsive articles, system notifications, feed filters, podcast support and custom user tags. 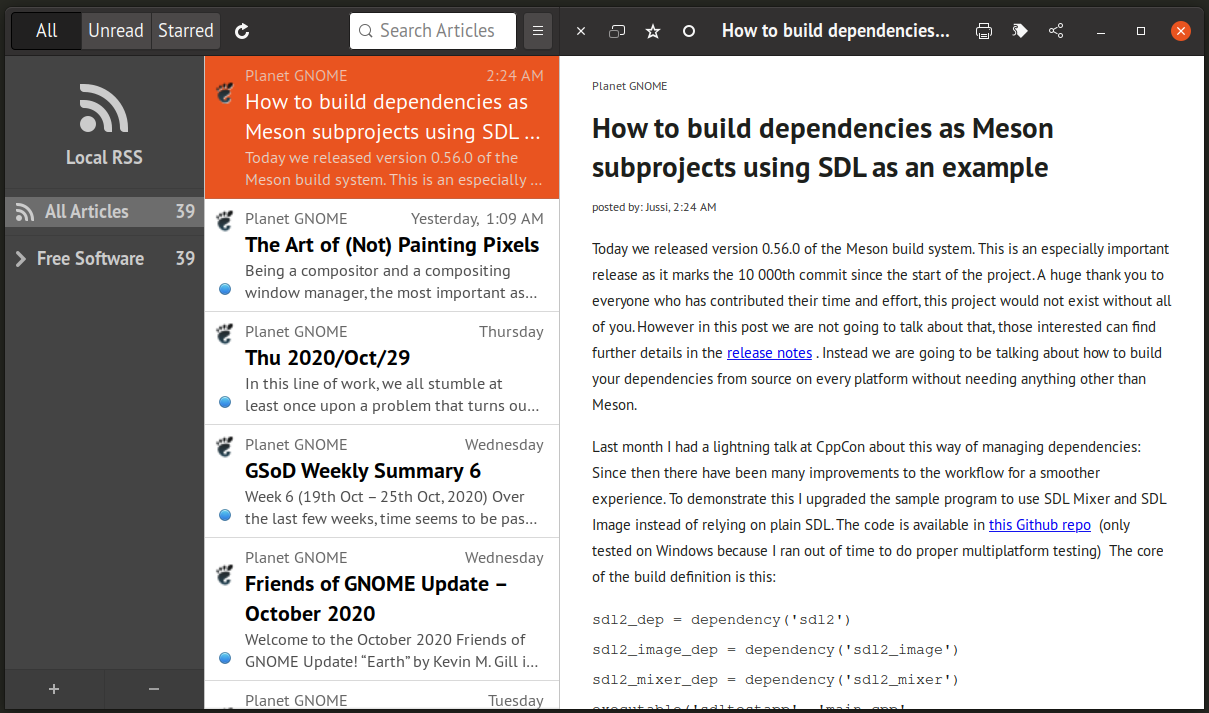 To install FeedReader in Ubuntu, use the following command:

Note that the development FeedReader has stopped and a new RSS client called “NewsFlash” is being developed by the same developers. However, FeedReader has a pretty comprehensive feature set and it is still a very capable RSS reader. If you want to install NewsFlash, follow the instructions available on its FlatHub page.

RSSGuard is a relatively new RSS reader for Linux developed using Qt libraries. Its feature set is identical to other popular RSS clients like Liferea and QuiteRSS. It also supports web based feed services like NextCloud and TinyTinyRSS. 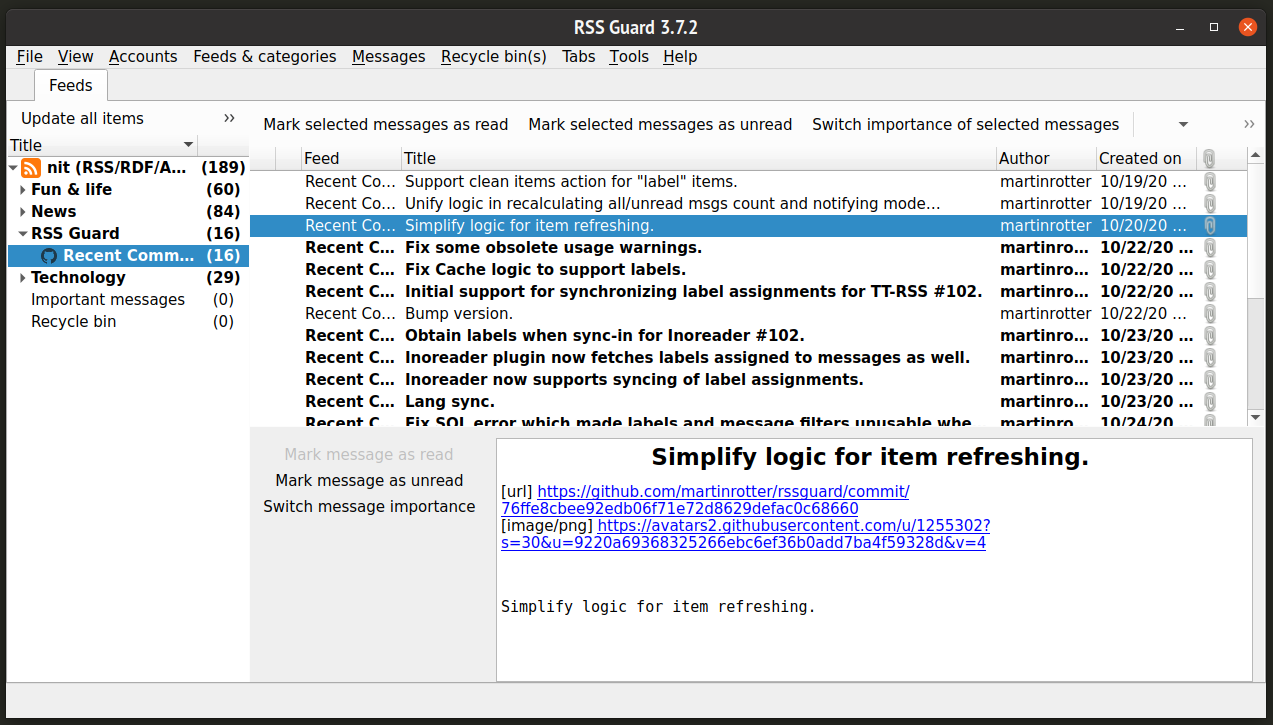 Feeds is a simple RSS reader for Linux featuring a minimal and clutter free GTK3 user interface. It can render full articles without javascript in its own embedded browser, allowing you to view articles as they would actually look in a standalone web browser. You can also import and export feeds in bulk. 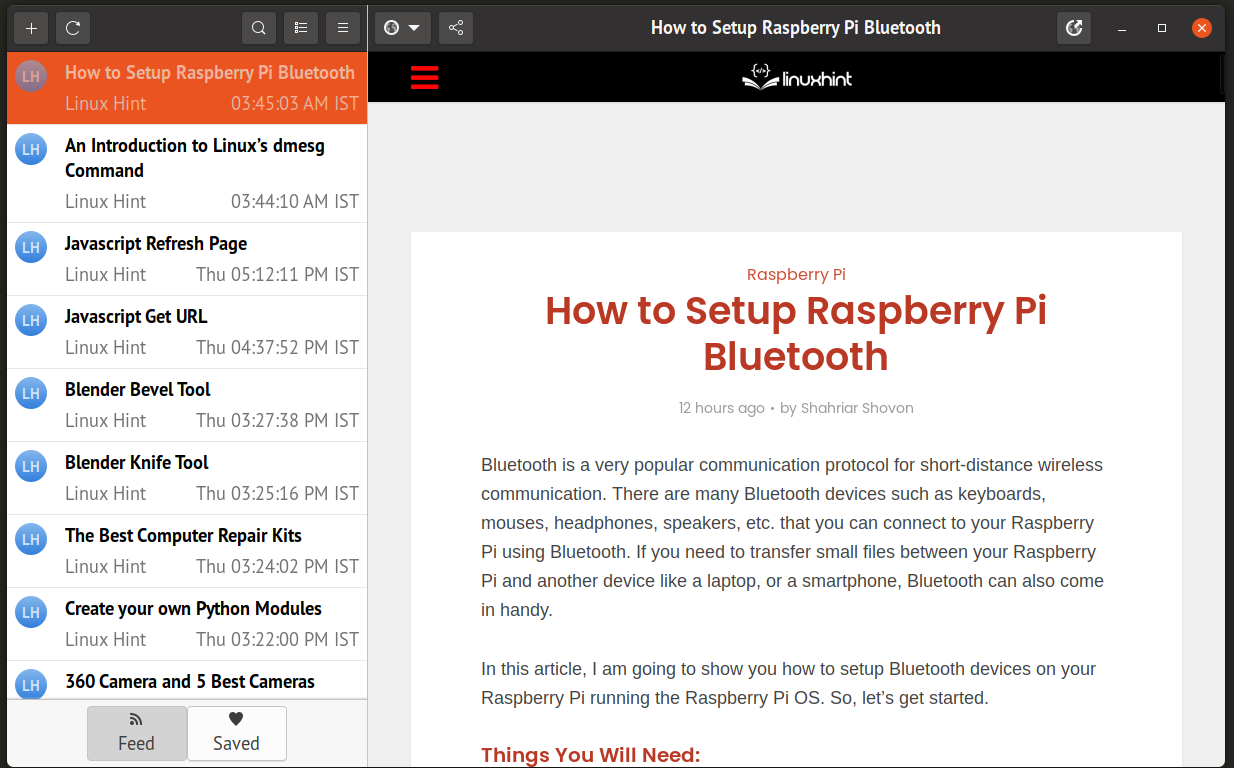 To install Feeds in Ubuntu, run following commands in succession:

Feeds can be installed in other Linux distributions from its FlatHub store page (scroll down for instructions).

Fluent Reader is a free and open source RSS reader developed using ElectronJS and web technologies. It features a user interface built using web frameworks and looks a little out of place with other native desktop Linux apps. There are a few features that make it different from other RSS readers. It can render full article pages along with all their CSS styles, similar to what you would normally see in a web browser. It also features a dark mode for comfortable reading experience. 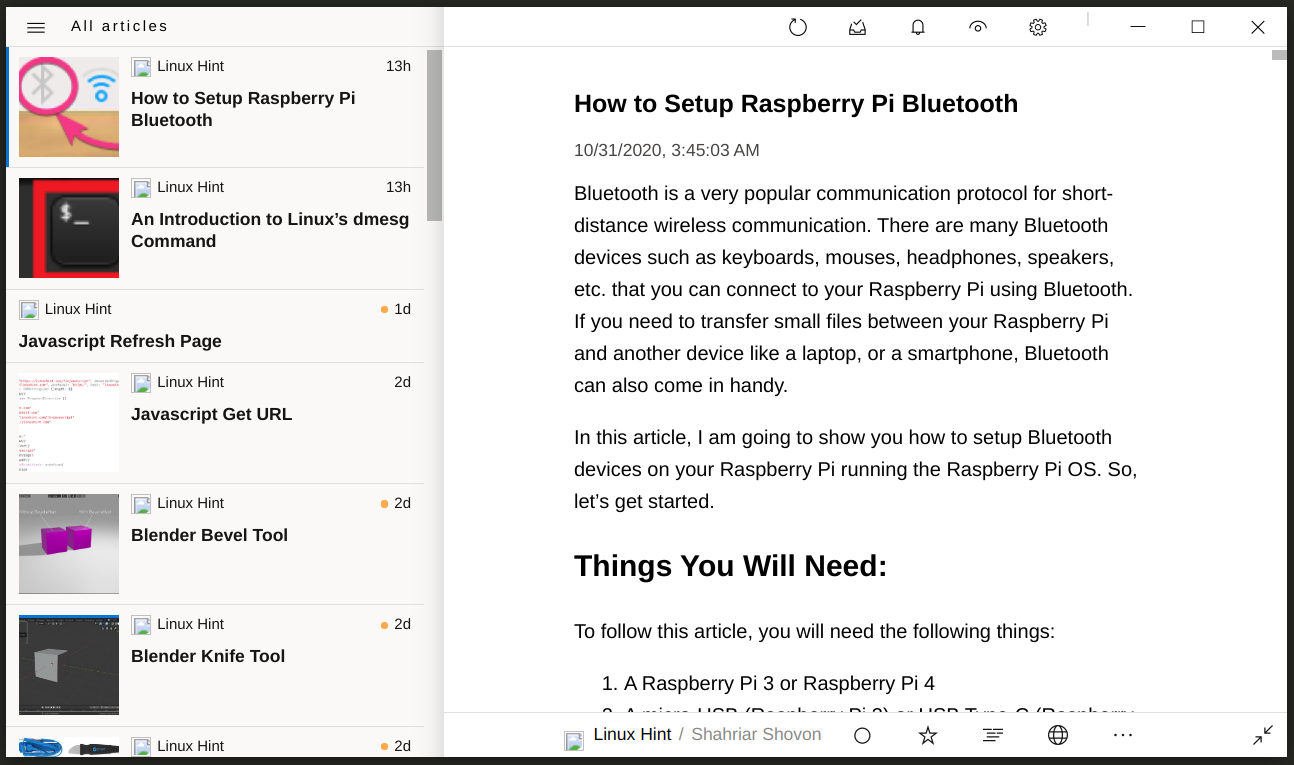 Fluent Reader AppImage file can be downloaded from its GitHub page.

Newsboat is a command line RSS reader for Linux. You can add RSS URLs to a text file and Newboat will automatically get article feeds next time you launch it. 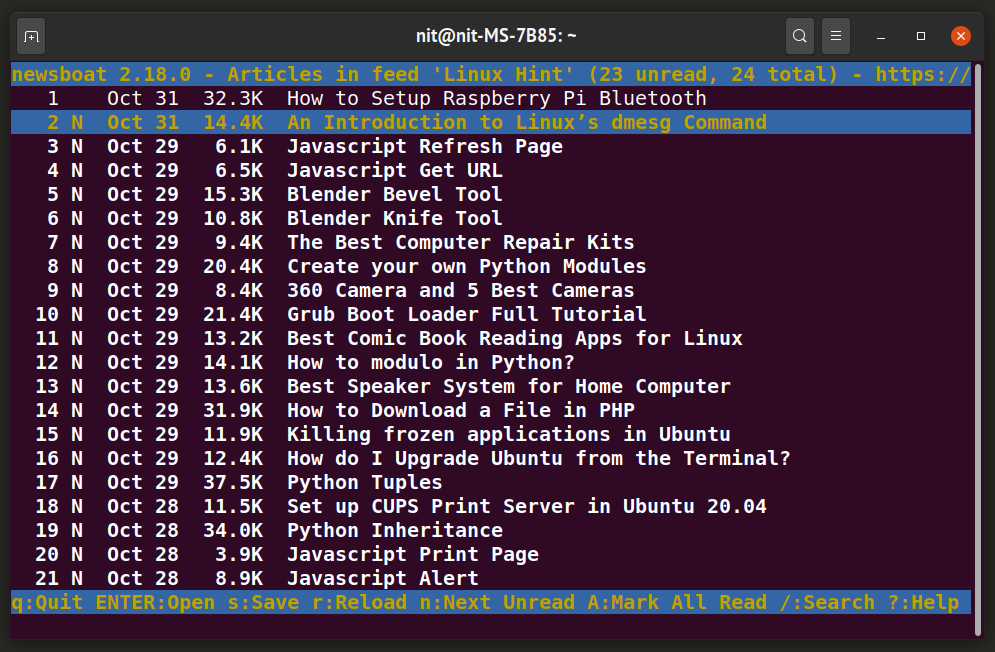 To install Newsboat in Ubuntu, run the command below:

Newsboat can be installed in other Linux distributions by following a guide available here.

To launch Newsboat and load RSS feeds in a terminal, add feed subscriptions links to “$HOME/.newsboat/urls” file and run the command below:

Alternatively you can supply your own URL file by running a command in the following pattern:

RSS readers provide an organized way to aggregate and read your favorite articles. However, the usage of RSS feeds have been declining over the years, mainly because of widening reach of social media and the closing down of Google Reader in 2013. Some Linux desktop RSS apps like RSSOwl are not in development anymore and there is an overall decline in the number of RSS applications for desktop PCs.