It doesn’t matter if you’re a casual Linux user or a season system administrator, a good terminal emulator can vastly improve your experience, allowing you to unleash the full potential of Linux and various command-line tools.

This article isn’t about Linux terminals that ship with popular desktop environments, such as GNOME Terminal, Konsole, or xfce4-terminal. Instead, we’re focusing on the best available alternatives so you have a lot of options to choose from regardless of whether you place greater value on minimalism or features. 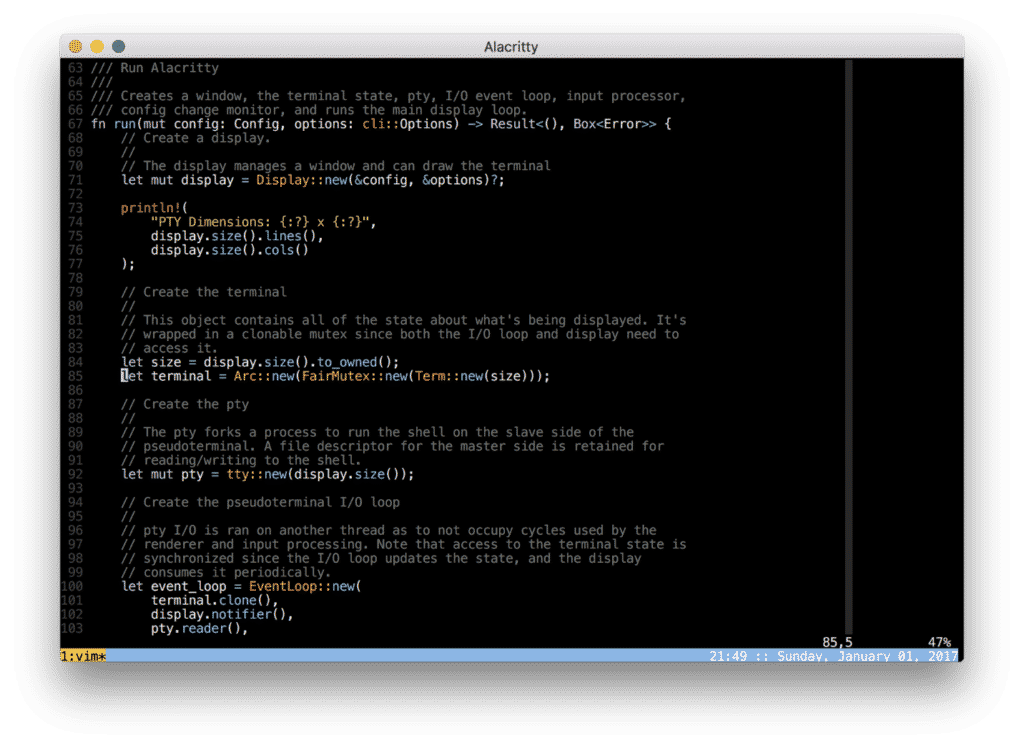 Alacritty has been the most trending Linux terminal since its launch in 2017. Written in Rust, this GPU-accelerated terminal uses OpenGL for rendering to achieve fantastic performance even when running in fullscreen mode on a 4K monitor.

In addition to its performance, Alacritty also offers simplicity and sane defaults, which greatly reduce the need for post-installation tweaking. But if you want to, you can simply open its well-documented configuration file in your favorite text editor and tweak Alacritty to your liking.

You should be able to find Alacritty in your distribution’s repositories, but you can also download Precompiled binaries from Alacritty’s GitHub releases page. Apart from Linux, Alacritty also runs on Windows, macOS, and *BSD.

Yakuake is one of the most popular drop-down terminals because it’s smooth, configurable, skinnable, and has a tabbed interface. The only thing you might not like about it is the fact that it’s based on KDE Konsole.

If you’re running a GNOME-based system and would like to avoid installing parts of KDE, you can instead choose Guake, which is a drop-down terminal developed for GNOME. There’s also Tilda, a DE-agnostic drop-down terminal with minimal dependencies. 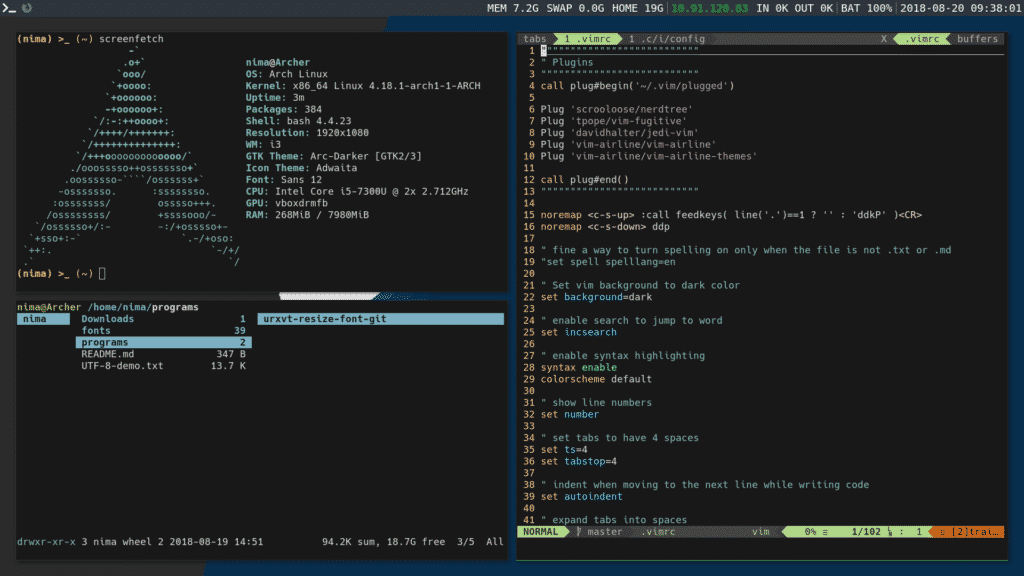 Intended as an xterm replacement and based on rxvt, URxvt is a customizable Unicode-friendly terminal that plays nicely with i3 and other tiling window managers.

URxvt doesn’t look too sexy in its default configuration, but you can make it look however you want with command-line arguments or Xresources, a user-level configuration dotfile that’s typically located in ~/.Xresources. The ArchWiki does a great job of explaining the most important configuration options, and the man page covers the rest.

If you don’t have time to learn how to configure URxvt but still want to make it pretty, we highly recommend borrowing someone else’s config file. Here’s one good example, but you can find countless more with a simple online search. 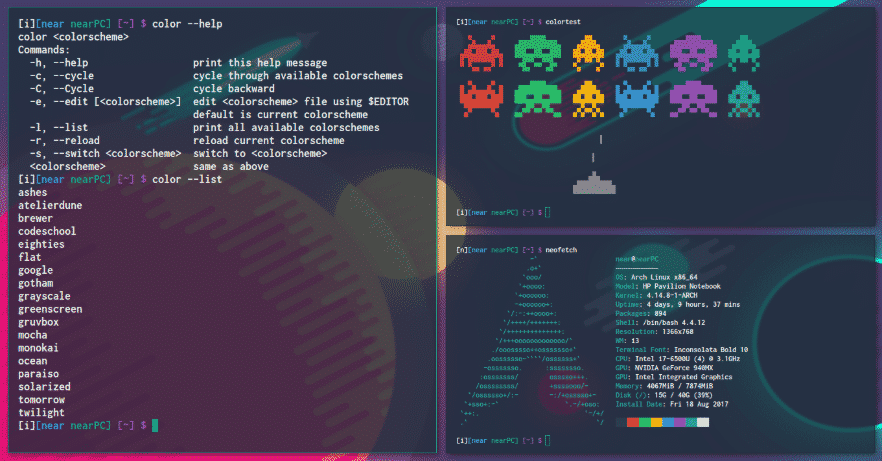 Aimed at users who prefer to use the keyboard over the mouse, Termite is a VTE-based terminal that allows users to change the font size on the fly with simple VIM-style keyboard shortcuts.

Just like VIM, Termite has two primary modes of operation—Insert and Selection—and it takes some time to get used to them if you have no previous experience with VIM. But once you spend some time with it, you’ll be rewarded with increased productivity and flexibility.

Like all VTE-based terminals, Termite isn’t anywhere as fast as Alacritty, but it still performs well enough in most situations. 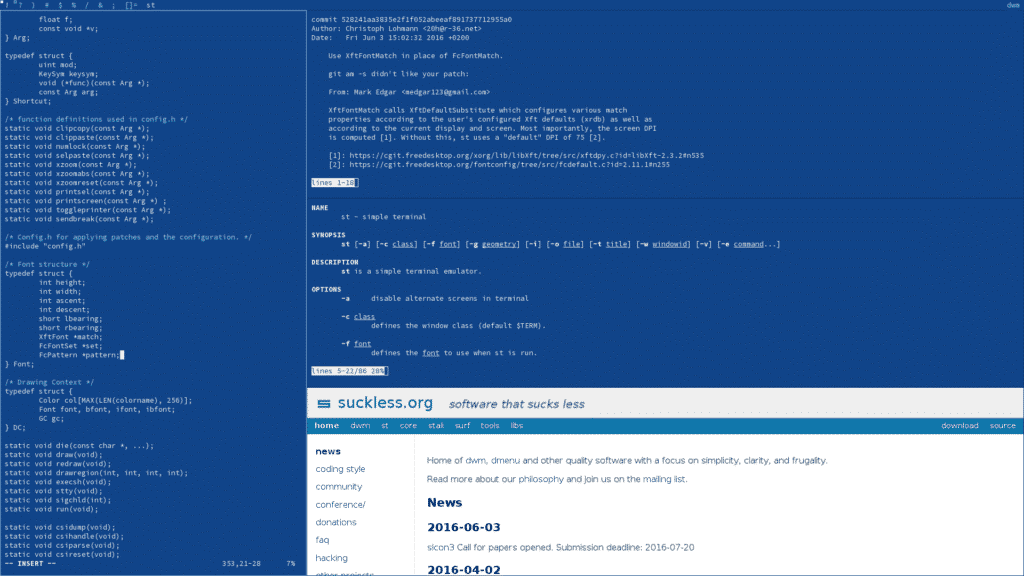 Developed by suckless, a community of developers working on minimalist free software projects that emphasize simplicity, clarity, and frugality, ST is a simple terminal implementation that doesn’t try to emulate obscure terminals most users won’t ever come in contact with (we’re looking at you, Tektronix 4014).

The developers of ST decided to leave all historical baggage behind and create a lightweight and fast terminal with features users actually care about, such as clipboard handling, UTF-8 support, mouse and keyboard shortcuts, 256 colors and true colors, anti-aliased fonts, and line drawing, among others.

You can configure ST by editing config.h according to your needs. For changing the colors of your ST terminal, we highly recommend this handy tool, which allows you to easily design, edit, and export custom terminal color schemes. 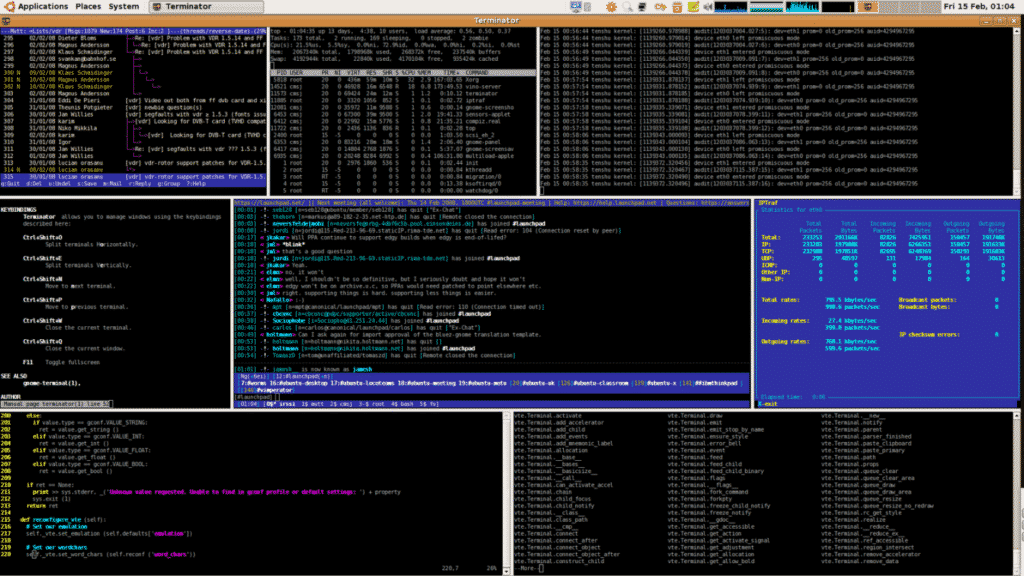 Are you the type of person who always has more than one terminal open? If so, Terminator might just be the ideal Linux terminal for you because it allows you to arrange multiple terminals in a grid. You can reorder individual terminal windows by dragging and dropping them to the desired place or accomplish the same with keyboard shortcuts.

If you come up with a layout that works for you particularly well, you can save it via the GUI preferences editor and quickly load it up next time. Because the behavior of Terminator is largely based on GNOME Terminal, most users can quickly figure out how it works even without reading a manual.

Terminator has support for plugins, so you can extend it and make it even more powerful than it is. By default, it comes with a plugin that creates a notification when it detects activity in a terminal window, a URL handler, a custom commands menu, and several other plugins. 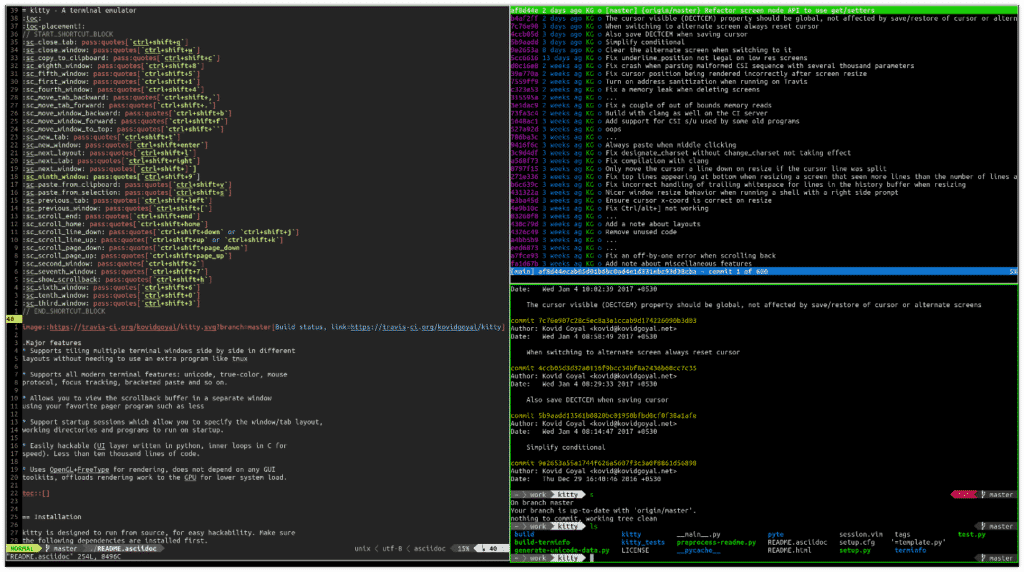 Kitty is a keyboard-oriented terminal that was designed to be simple, modular, and hackable. It supports GPU rendering for smooth scrolling, and its list of features includes everything from Unicode support to OpenType ligatures to graphics.

The ability to render arbitrary raster graphics comes in handy when using programs like termpdf, ranger, neofetch, and also Kitty’s own kitty-diff, a side-by-side terminal diff program with support for images.

Other noteworthy features of this likeable Linux terminal include tiling support, multiple copy/paste buffers, and compatibility with macOS.

If you’re still unsure which Linux terminal you should choose, why not try them all and see which work and which don’t work for you? While some terminals come pretty close, the perfect terminal doesn’t exist. All terminals have their advantages and disadvantages, and there’s nothing stopping you from using two or even more different terminals at the same time.