This article will cover a few useful applications that can be used to monitor statistics about AMD GPUs installed in your Linux system. These applications will only work properly and show correct information if you are using open source AMD GPU drivers (typically called AMDGPU drivers). If you have an AMD GPU, most Linux distributions should install and enable open source drivers automatically during OS installation. Since the release of “RX” series GPUs, open source drivers for AMD cards have improved leaps and bounds and now have performance almost at par with proprietary drivers. You should prefer open source drivers for AMD GPUs unless you are facing some hiccups or exceptions.

Radeontop is an open source application to monitor GPU usage statistics for AMD cards. It works with both open source drivers and legacy catalyst drivers. Though some features may be limited for catalyst drivers. It can show a variety of data about GPU usage in real time and all statistics are updated automatically periodically. Note that it cannot show GPU temperature or fan speed. 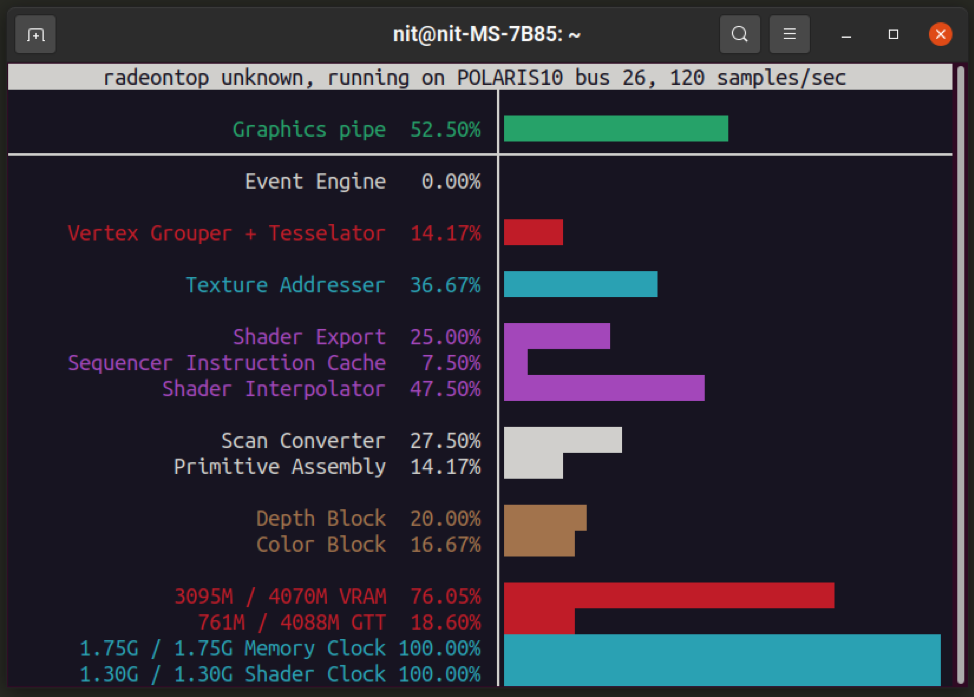 To install Radeontop in Ubuntu, execute the command specified below:

In other Linux distributions, you can install Radeontop from the package manager. You can also compile its source code to get executable binary files.

To run Radeontop, use a command in the following format:

To know more about Radeontop, you can run these commands in terminal:

Radeon profile is a powerful open source tool to both monitor and control GPU parameters and profiles for AMD cards that use open source drivers in Linux. It supports extensive statistics monitoring including GPU temperature values and fan speeds, something that “radeontop” lacks. It can also overclock your AMD GPU card, change power profiles and manage fan curves. 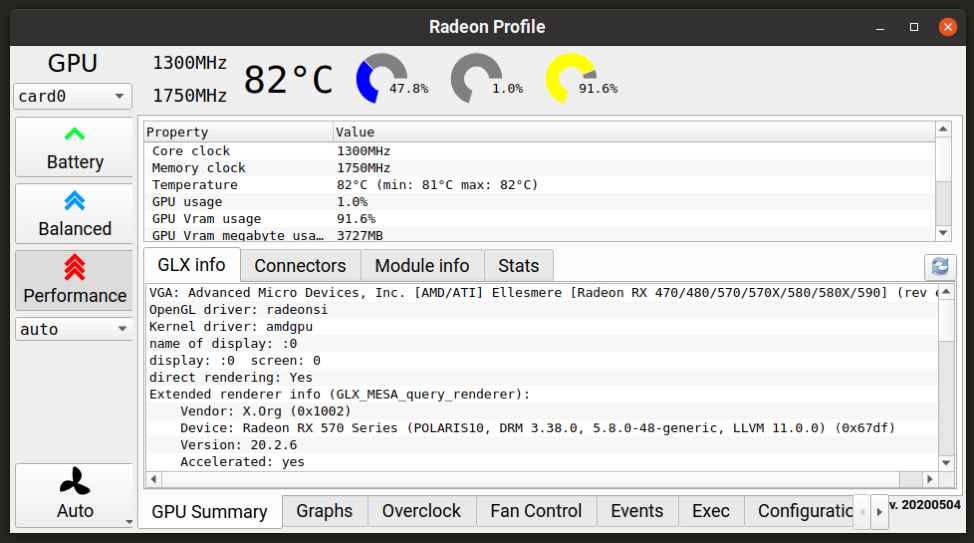 Installation instructions for other major Linux distributions can be found here. You can also compile a build from its source code.

To install Lm-sensors package in Ubuntu, execute the command mentioned below:

In other major Linux distributions, you can search for the “lm-sensors” package in the package manager. You can also compile an executable binary from its source code.

Once installed, run the command below and follow the on-screen instructions. It will probe your PC hardware and enable sensors as needed.

If you are asked to automatically add some lines to a config file, choose “yes”. Reboot your Linux system.

Now just use one of these two commands to view information about your AMD GPU: 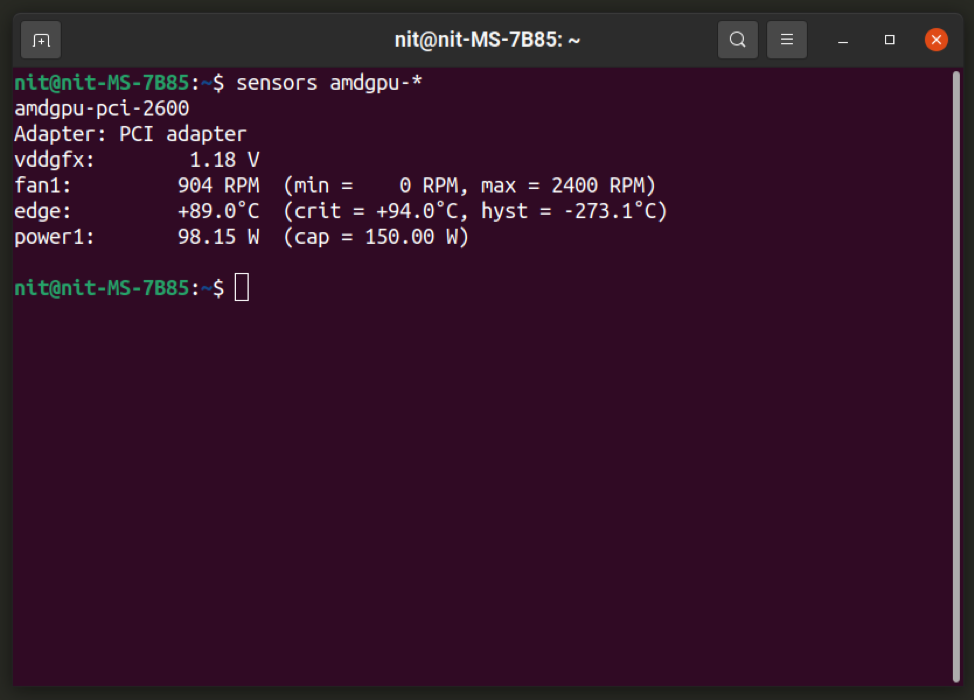 To show updated values every second, use this command instead:

You can modify the “-n” switch to change interval in seconds.

Psensor is a graphical system monitoring tool that can view temperature and other statistics about CPU and GPU units installed in your Linux system. It is based on the “Lm-sensors” utility mentioned above, so it is recommended that you follow instructions for the “Lm-sensors” section above to enable necessary sensors first.

To install Psensor packages in Ubuntu, execute the following command:

In other Linux distributions, Psensor can be installed from the package manager. You can also follow instructions on its homepage to install it. 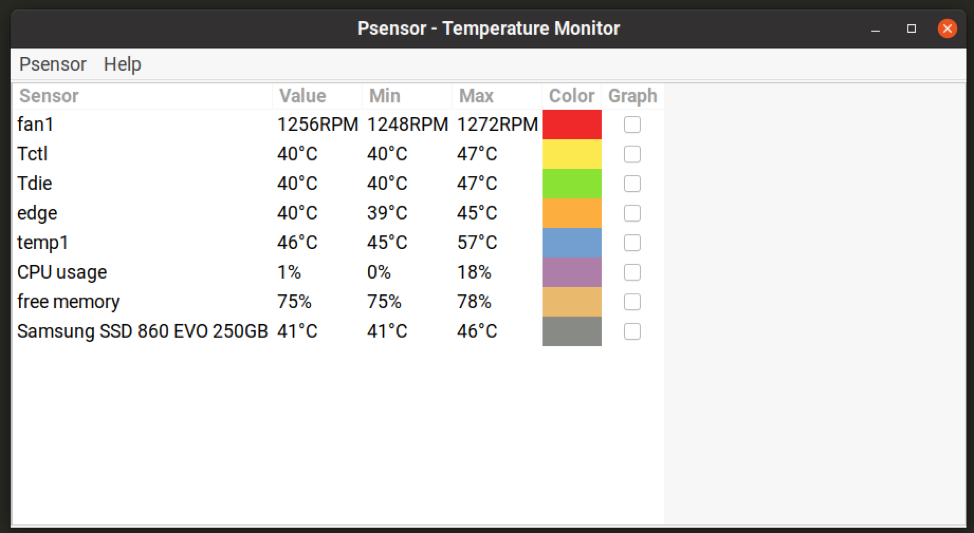 Psensor can show real-time information about your AMD GPU on the system panel as an indicator applet. 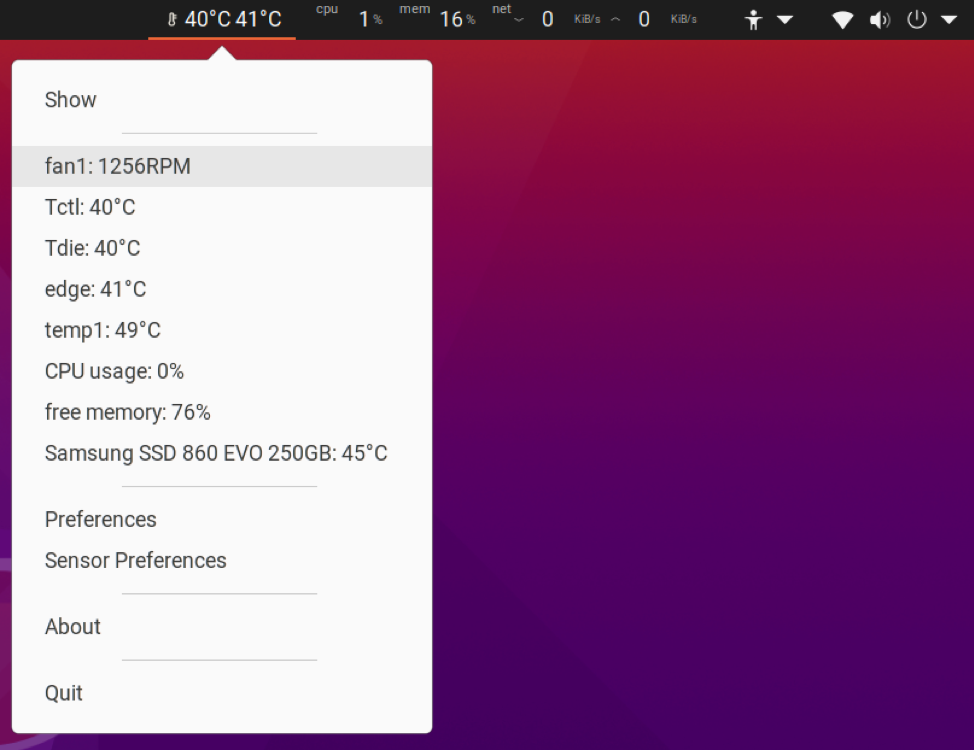 The “fan1” and “edge” fields in the screenshot above show information about AMD GPU. These names can be different for other AMD GPUs and you can rename them as well for easier identification.

To identify names for AMD GPU indicators, go to “Sensor Preferences” and check their details (as shown in the screenshot below).

To enable real-time indicators on the system panel, click on “Application Indicator” tab for any field on the sidebar and select “Display sensor in the label” checkbox (as shown in the screenshot below).

Both “Psensor” and “Lm-sensors” work with multiple GPUs, so you can view information about multiple AMD cards installed in your Linux system by using these tools.

Ricks-Lab GPU Utilities is an open source command app that provides a bunch of tools to monitor statistics for both NVIDIA and AMD GPUs. You can install these utilities in Ubuntu by executing the command specified below:

Packages for Ricks-Lab GPU Utilities can be installed from the package manager in other major Linux distributions. You can also follow its official installation guide available here.

Once installed, run the command specified below to view information about your AMD GPU: 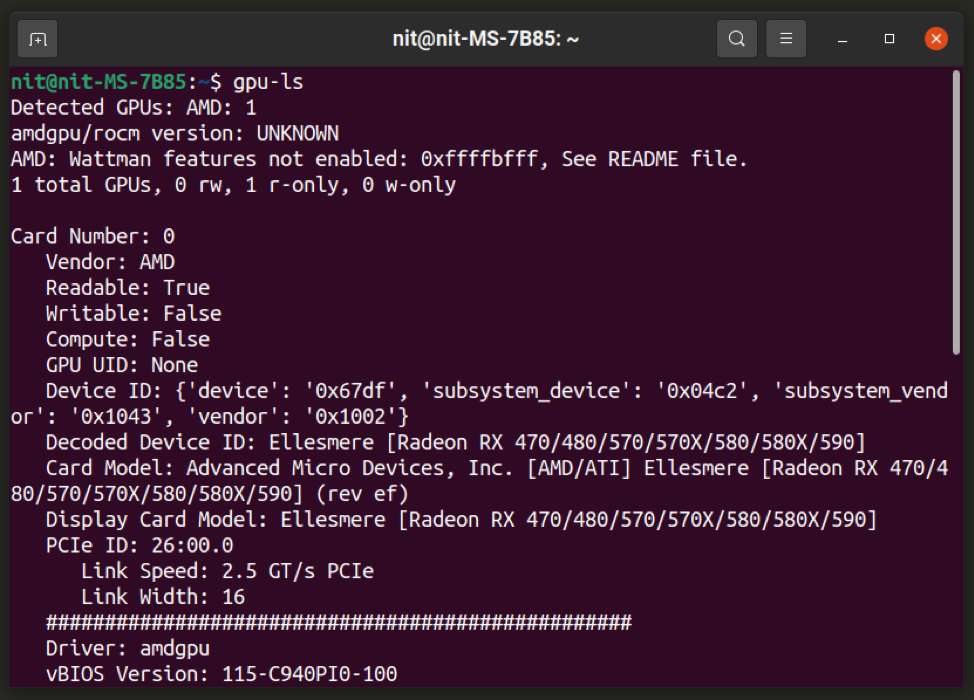 Run the command below to show a continuously updating GPU monitor in terminal: 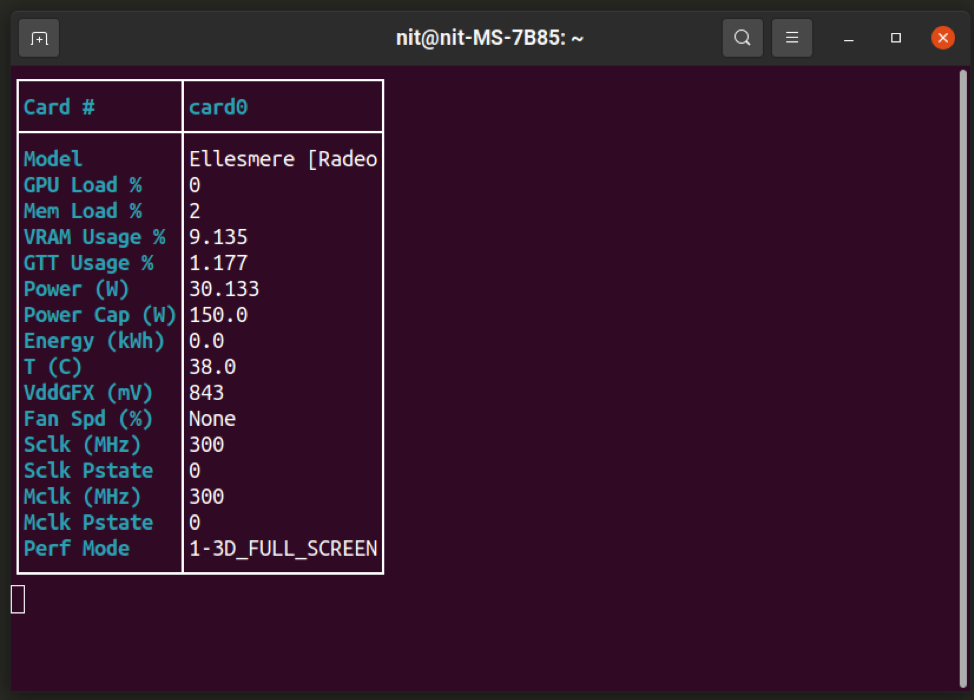 Run the command below to show GPU monitor in a graphical window: 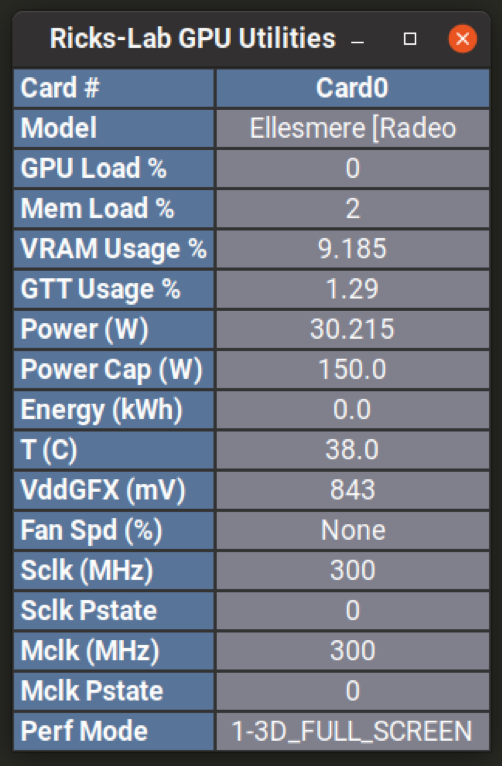 Run the command below to view plots and charts for data collected on your AMD GPU. Charts may take some time to populate. 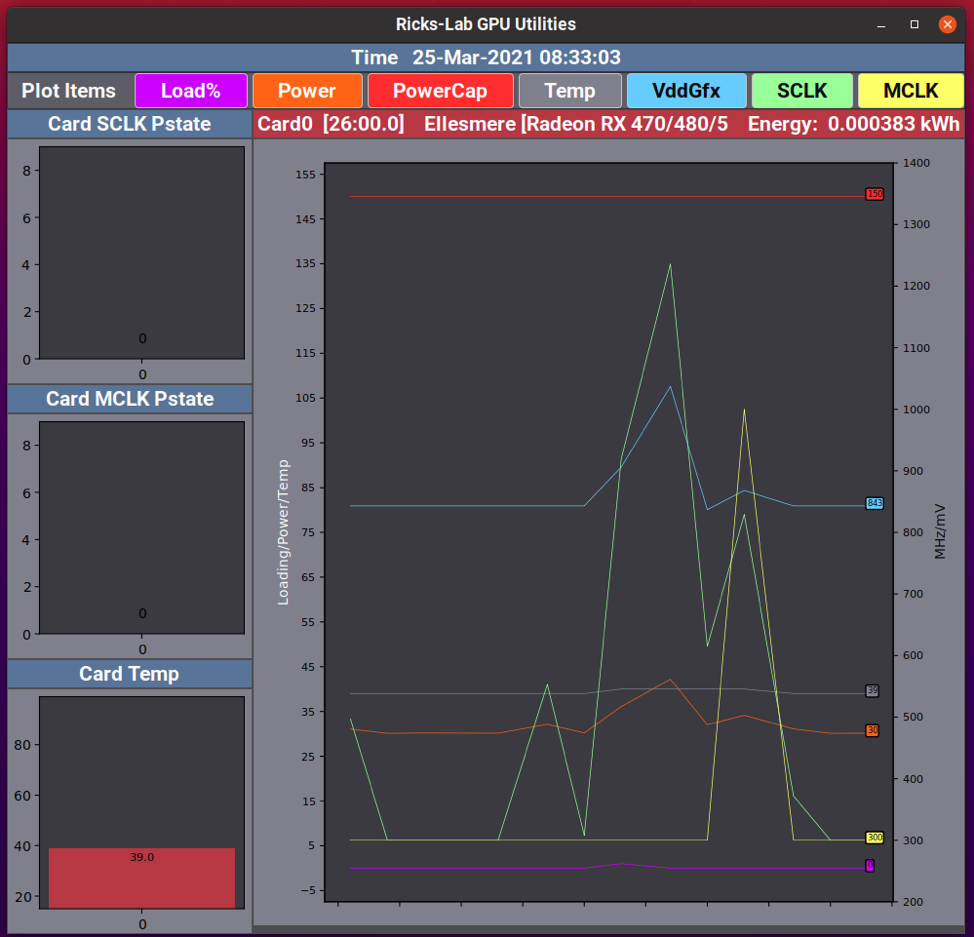 These are some of the best GPU monitoring tools available on Linux to monitor real-time information about your AMD GPU. These utilities are mainly designed and developed for open source drivers that are simply called “AMDGPU” drivers.