Many consider bash an independent word. However, very few people know that the term ‘bash’ actually stands for Bourne Again Shell (BASh). Apart from being the default command-line interpreter for the Linux operating system, bash is a full-fledged programming language. Those who are fond of using the Linux operating system must be well aware of bash scripting. For novice users, however, this article shows the process for writing a simple Bash script in Linux Mint 20.

By successfully performing the following steps, you can write a simple bash script in Linux Mint 20:

First, create an empty document in the home directory of Linux Mint 20 and give it any name you prefer, followed by the .sh extension. For our scenario, we have named the document ‘Bash.sh,’ as shown in the image below: 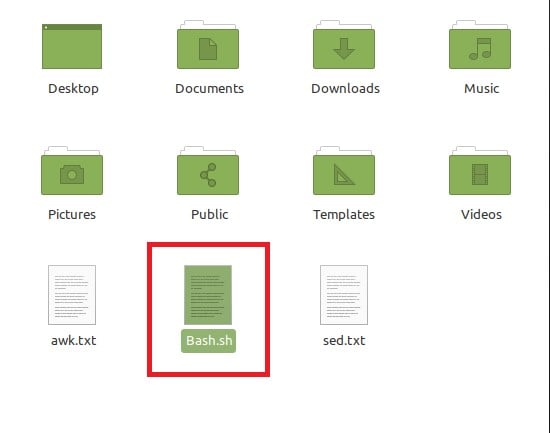 Once you have typed this script, just save your bash file and then close it.
Now, you need to execute this bash script. To do so, you will need to launch the terminal, as shown in the following image:

After launching the terminal in Linux Mint 20, execute the newly created bash script with the command shown below:

Here, you must provide whatever name you have given to your bash file to replace the term ‘File.’ We have replaced this name with the name ‘Bash.sh,’ i.e., with the name of the bash file that we have created.

After you run this command, the output of your bash script will be displayed in the terminal, as shown in the image below:

In this script, we want the user to provide his or her name. Once the user enters his name via the terminal, the name is stored in the ‘name’ variable through the ‘read’ command. Then, we want to display a message to the user while addressing the user with the name he or she entered. Here, you can access the value stored in the ‘name’ variable by putting a ‘$’ symbol before it. The usage of the ‘echo’ command has already been explained in depth in the script created above.

Execute your newly modified bash script via the terminal. Because of the modification done above, the terminal will ask you to provide your name, as shown in the image below:

Once you provide your name and hit Enter, the bash script will display a message to you while addressing you with your name, as shown in the following image:

Now, we will try to tweak our bash script a little bit more to demonstrate to you the usage of the ‘date’ command. This command is simply used to determine the current date and time. To achieve this functionality, type the script shown in the image below in your bash file.

The only difference from the above script is that this time, we have created a new variable, ‘date,’ and have assigned the ‘date’ command as its value. Whenever we want to store a command in a variable in bash, that command is always enclosed within parentheses, and we put a ‘$’ symbol before the command. After storing the value of the ‘date’ command in the ‘date’ variable, we have simply printed it out in the terminal. After making these changes, save the bash file and close it.

Execute the same bash script again. This time, after entering your name, the terminal will also show you the current date and time while addressing you with your name, as shown in the following image:

After making these changes, save the file and close it. Execute this bash file from the terminal. The terminal will ask you to enter your name. After entering your name, as soon as you press the Enter key, you will no longer be able to see any output in the terminal, as shown in the following image:

Now, go to your Home directory. Here, you will find a new file named ‘NewBashFile.txt,’ as highlighted in the image below: 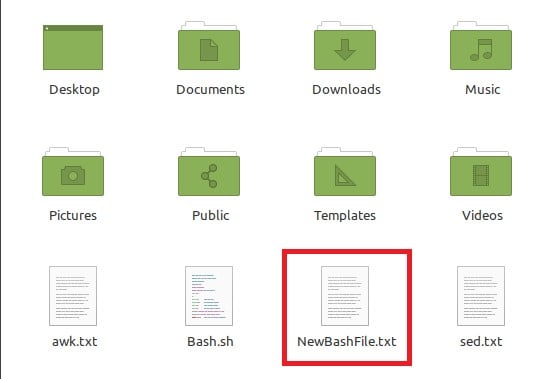 When you double-click on this file to launch it, you will be able to see the output of your bash script as the content of this text file, as shown in the following image:

Alternatively, you can also execute the following command in your terminal to view the contents of this output file:

When you execute the command shown above, you will be able to see the contents of that file in your terminal:

The different scenarios discussed in the method shown above are enough to provide a jumpstart to those keen to learn bash scripting. With the help of these scenarios, we managed to demonstrate the method of taking an input, displaying the output, using bash commands, and storing the output of a script to a new file. However, bash programming can also be used very conveniently for other complex problems.