The “For” loop is the most used and well-known loop in the programming field. Also, it is the easiest loop to be utilized in the codes. It operates on some list of values that are defined in it or out of it.  The “for” loop can be defined in bracket-style or without brackets as per your choice. Today, we will be learning to write and use the “for” loop within the shell script while working on Ubuntu 20.04. So, let’s start your learning by Login from the system and launch the console shell application on it employing “Ctrl+Alt+T”.

Let’s look at the “for” loop in a shell script without writing it in a file. To start a shell script, you need to add a bash extension with the hash sign. After that, we have started a “for” loop in the next line. The “for” loop must contain some variable. In our case, this variable is “I”. This variable is part of a loop to execute values, e.g., 2, 4, 6, 8, 10. After that, the “do” statement will tell us what to do upon the loop got executed. In this example, it will display a text along with the variable value until the loop ends. The “done” clause shows that the “for” loop has been ended. Hence, it displays the 5 statements containing the 5 different values that are being used in the loop.

Run the file using the “bash” query as displayed on the image. The loop has been executed 10 times, and every time it displays the new line. 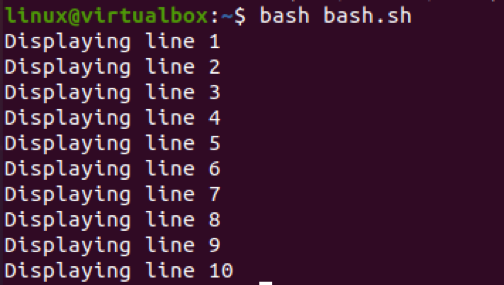 Upon executing a file, we got the 5 results as the loop has been executed 5 times. The output shows that the initial value is 3 incremented by “3” every time, and the final value is 15.

Let’s create a table of “6” by using the very same syntax of the “for” loop. The table must end on “60” and increment by “6”. Each incremented value will be saved in variable “var” and will be displayed.

After successfully executing the updated shell script file, we have got the table of 6 up to 60 that can be seen in the screenshot picture below. 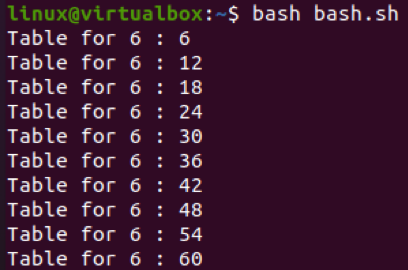 Let’s see how the loop operates on the “if” statements upon declared or used within it. So, we have been using the most used syntax of declaring the “for” loop, i.e., within the brackets. The loop starts from 1 and ends on 10. Within the “do” clause, if the statement has been utilized to check the condition. If any of the values from the loop list matched the integer “6”, the loop must break. Otherwise, the loop continues to display the loop list value in the shell.

After running the bash file in the shell, we have found that the integer “6” matches the loop value and displays only the first 5 loop list items. The loop breaks after the condition got met on the 6th increment.

Let’s use the for loop with its another syntax while using a list of fruit values. The “if” statement is utilized to check if the list contains the fruit “mango” in it. If the list contains the specified value, it will execute the echo statement within the “then” clause stating: “Fruit matched is mango”. The loop must break here. Otherwise, the loop will continue to be executed and display the relevant fruit value until it reaches the end list value.

After running the code, it displays the first three list items, and then conditions got met. Thus, it stated that the “Fruit matched is mango” and the loop breaks.

The output for this code displays the array values one by one, i.e., names.

We can also utilize the simple “for” loop in a shell script to list the files. So, we have been searching and displaying all the “bash” files in the root directory of our system, i.e., HOME.

Upon the execution of the above code, we have got three Files from our system.

Let’s search for all the text files in the Home directory of a system using the code shown below.

The output indicates that our system has got three text files in its home folder.

This article contains the different ways to write and use the “for” loop in the bash shell script. It also demonstrates the simple examples to use “if” statements, arrays, lists, strings, and integers within the “for” loop to perform different operations. So, this article is a bonus gift to our Linux users.