Wi-Fi device is highly vulnerable to hacking because everywhere the signals generated by a Wi-Fi device can be discovered by anyone. Many routers contain vulnerabilities that can be exploited with software tools present in Kali Linux operating system. ISPs and Router have WPS security turn on by default that makes these devices prone to wireless attacks. Bluetooth devices are at equal risk as Wi-Fi devices, as Bluetooth signals can also be picked by anyone. This makes wireless security and pentesting an essential thing. Some of the top wireless attack tools are explained here.

A C-language tool that implements a WPS brute force attack that exploits the design flaws in a WPS protected device. It is reflected as an improved tool than the original Reaver code, as it incorporates limited dependencies, enhanced CPU and memory performance, precise management of errors, and a wide range of decisions. It includes various enhancements in detecting and handling of abnormal situations. It is tested on several Wi-Fi vendors that had different configuration settings with successful results. It is open-source and specifically designed for Linux operating systems. 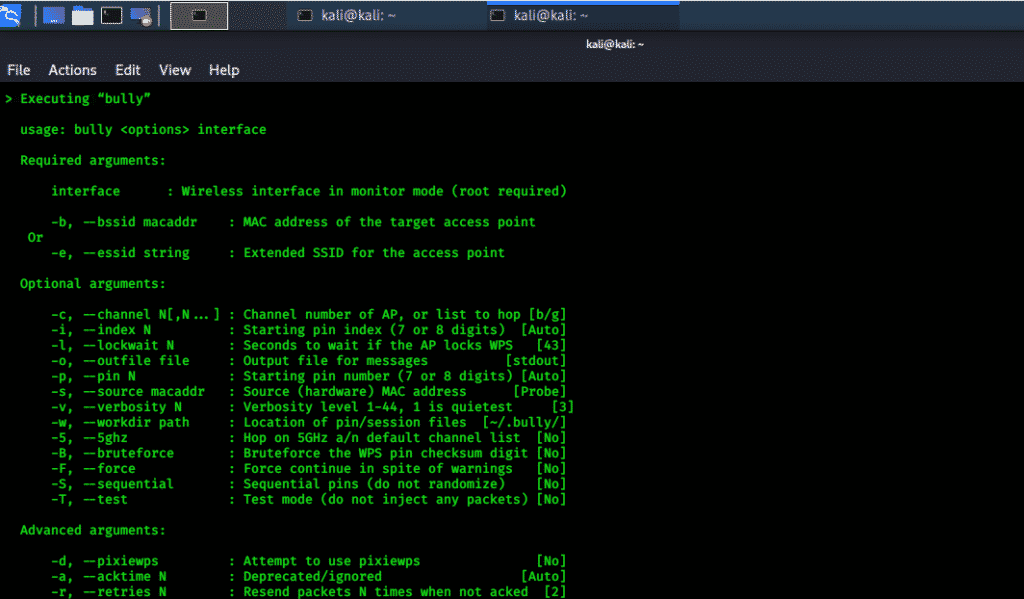 To recover WPA / WPA2 passphrases, Reaver adopts a brute force against Wi-Fi Protected Setup (WPS) registrar PINs. Reaver is built to be a reliable and effective WPS attack tool and is tested against a broad range of access points and WPS frameworks. 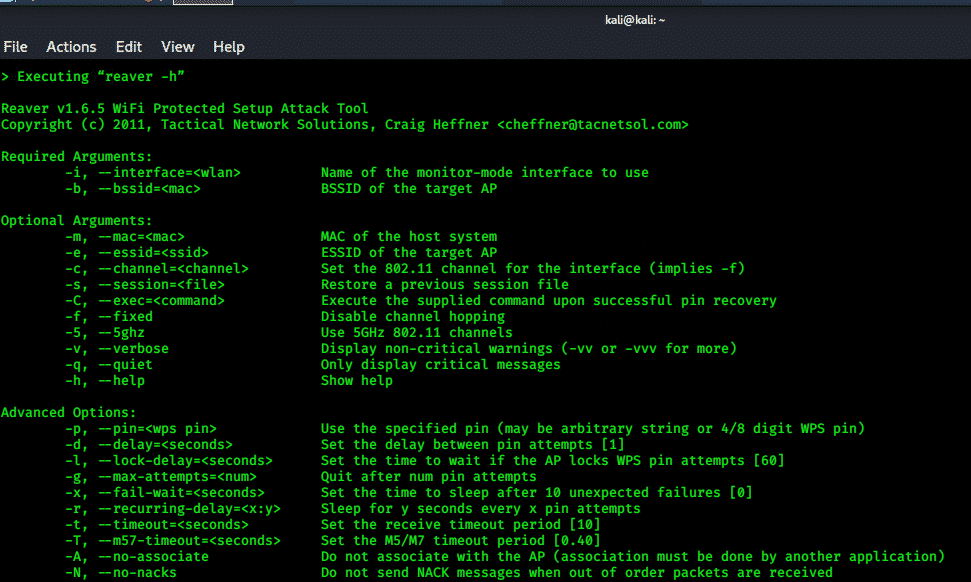 A Python software tool that uses the Python Qt GUI library to perform wireless security attacks and auditing. Fern wifi cracker can crack and recover lost WPA/WEP and WPS keys. It can also launch network-based attacks on ethernet or wireless networks. It has a graphical user interface and very easy to use.

It supports WEP key cracking with many attacks such as ARP request replay, fragment attacks, caffe-latte attacks, or chop-chop attacks. It can also launch a dictionary-based attack or WPS attacks for cracking WPA/WPA2 key. After a successful attack, the recovered key is stored in a database. It has an automatic Access Point (AP) attack system and can hijack sessions in different ethernet modes. Fern can also track AP Mac address and Geographical location. It can launch brute force and internal man-in-the-middle engine attacks on HTTP, HTTPS, TELNET and FTP servers. 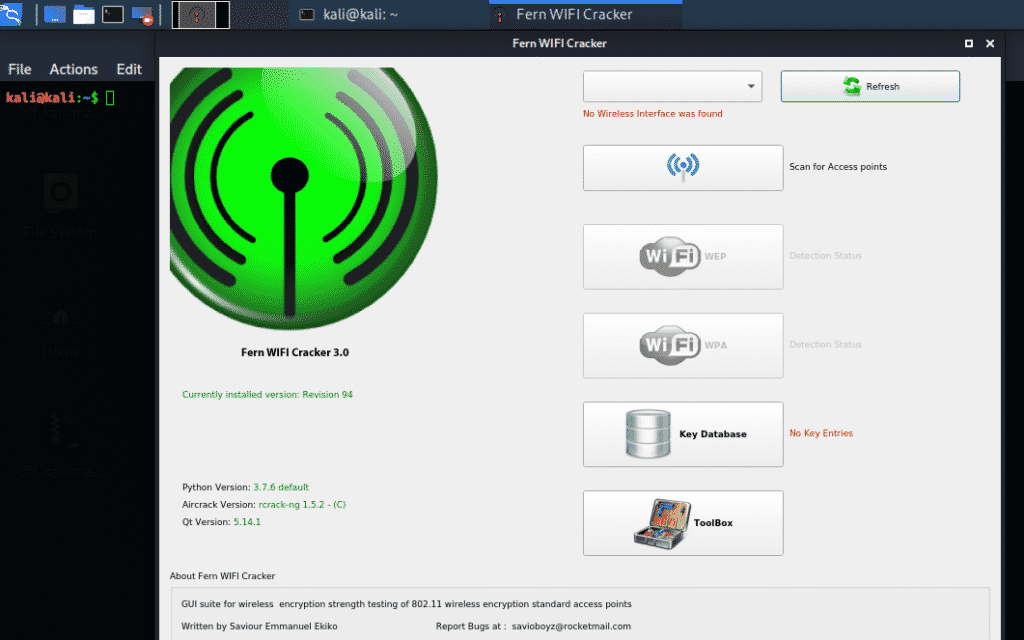 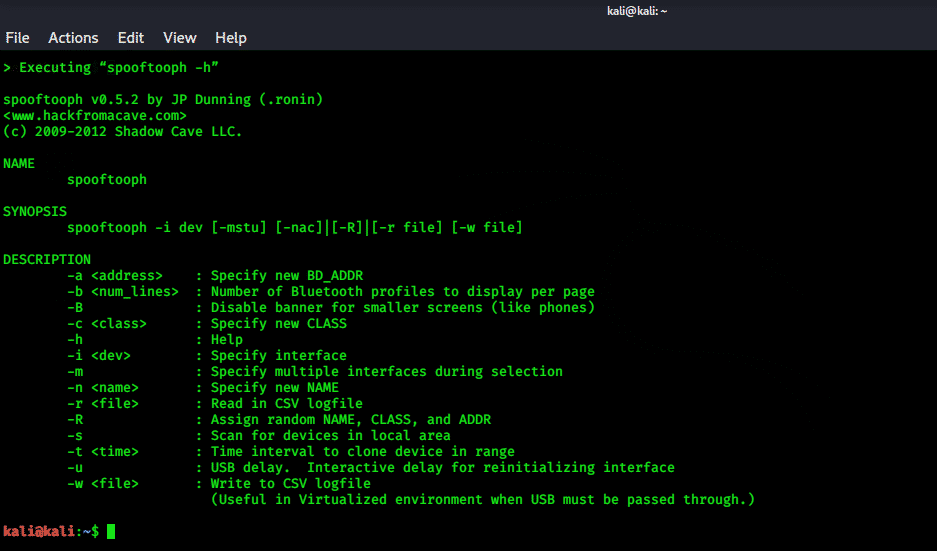 Aircrack-ng is one of the most popular toolkits in Kali Linux and is widely used in other distros as well. It is a key cracking utility for Wi-Fi 802.11 WEP and WPA-PSK, and through capturing data packets, keys are recovered. It launches Fluhrer, Mantin, and Shamir (FMS) attack with optimization attacks like PTW attack and KoreK attacks that in turns makes this WEP key cracking tool faster than other tools. 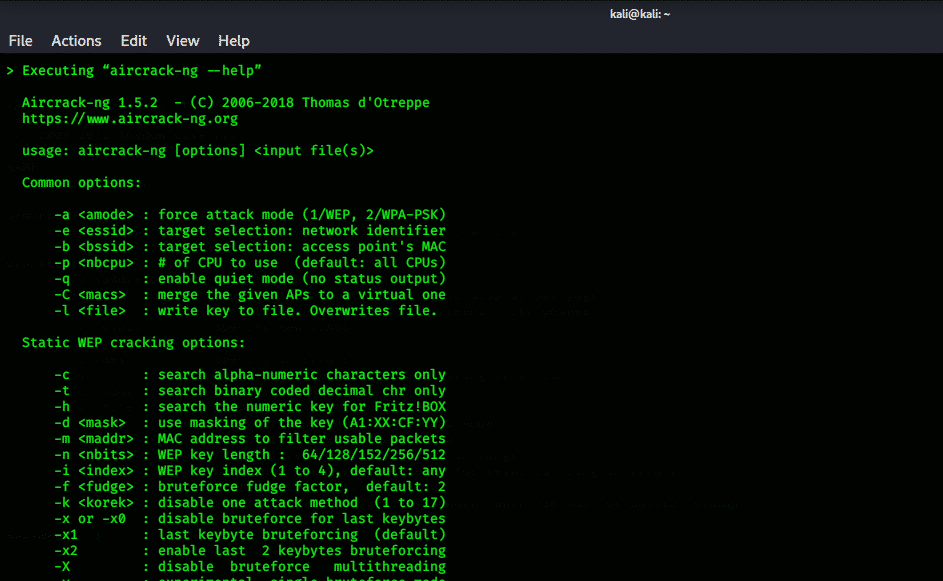 It detects, sniffs an 802.11 wireless network, and also works as an intrusion detection system. It works on layer 2 of a wireless network, but it can work with only those wireless cards that can support rfmon mode. It sniffs 802.11 a/b/g/n data traffic. Kismet can use various other programs to play audial alarms for reading out network summaries, events or deliver GPS location coordinates. Kismet has three different tools for core, client, and server. 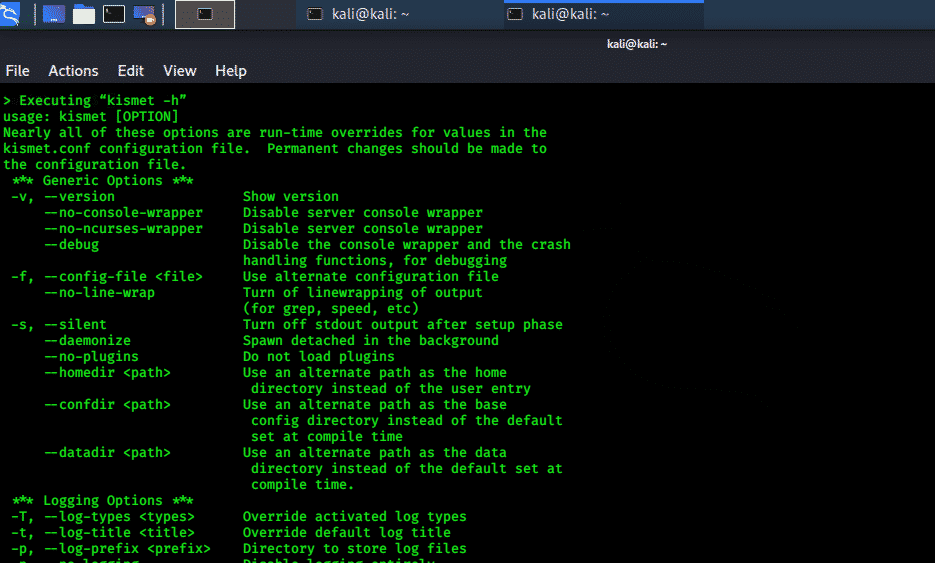 PixieWPS is a C language tool that uses brute force attacks to offline the WPS pin and exploits the low entropy of some Access Points, and this attack is called pixie dust attack. It is an opensource tool that can perform checksum optimization, produce small Diffie-Hellman keys while working with the Reaver tool. It can reduce the entropy level of some Access point seeds from 32 to 25 bit, and this is done to achieve the requirement of C LCG pseudo-random function. 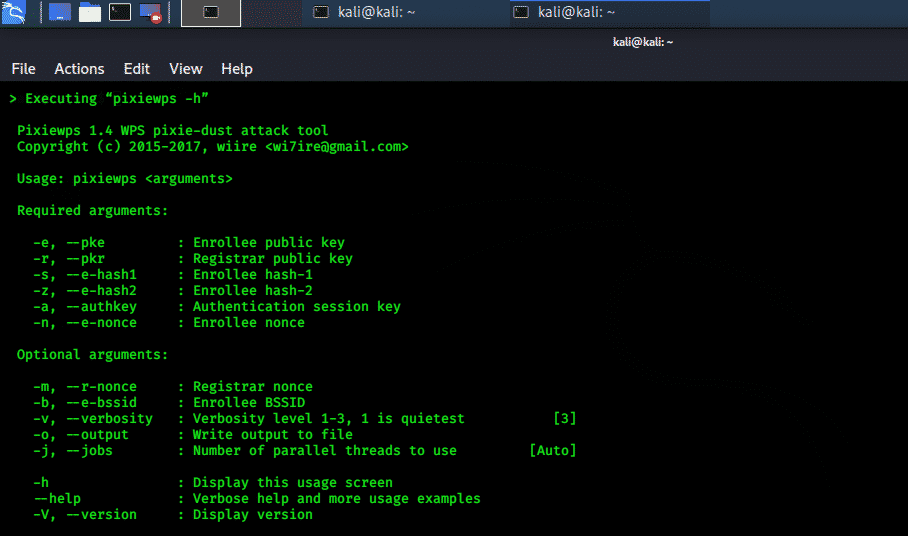 Wifite is a highly customizable tool with only a few arguments, and it is used for attacking networks that are encrypted by WEP, WPA, and WPS keys simultaneously. It is also known as “set it and forget it” auditing tool for wireless networks. It finds targets by their signal strength in which is measured in decibels (dB) and starts cracking the closest AP first. It de-authenticates clients on a hidden network to automatically show their SSIDs. It contains several filters for specifying a target for attack. It can change MAC address to a unique random address before attacking, and when it is done attacking the original MAC address is restored. Upon exit, the session summary is displayed with cracked keys, and cracked passwords are saved to local file cracked.txt. 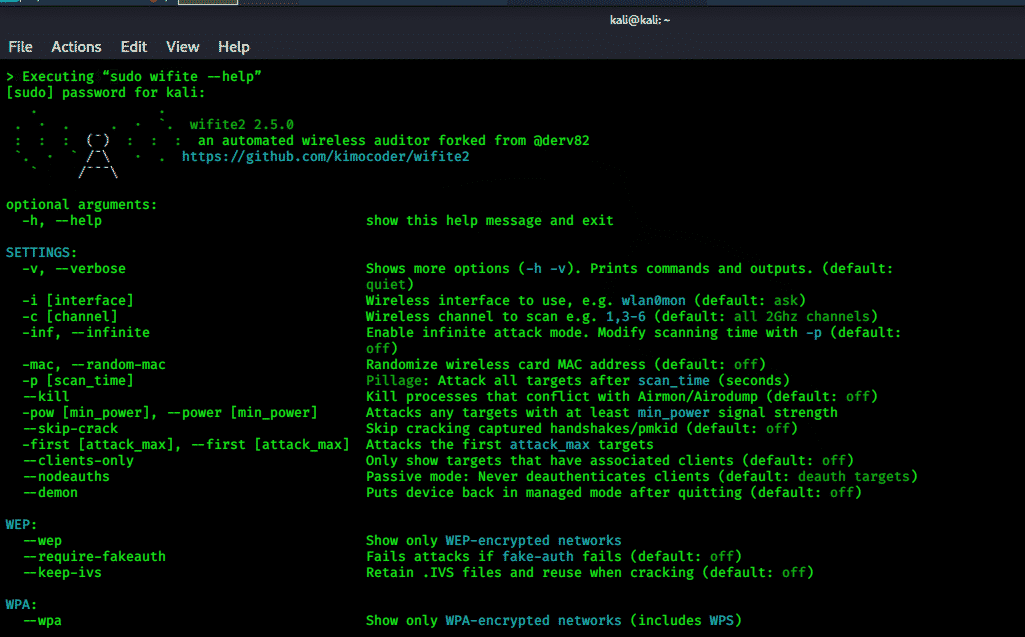 These are the “must-have” tools when performing wireless attacks in Kali Linux. All of these tools are open source and included in Kali Linux 2020.1 version.