Let’s create a new C++ file first. Ubuntu provides us with the “touch” instruction to make any type of file. Thus, we have been using it to generate a C++ file named “while.cc”. This file can be directly opened in the Gnu Nano editor from the shell terminal via “nano” instruction. If you don’t want to use nano editor, try opening the file explorer and moving towards the home folder or towards the folder where your file is located. Right-click on the newly created file and tap on the “Open file in Text editor” option to open it within the text editor to make code.

Now, the empty file has been opened. Within this example, we will take a single numerical value from the user as input and increment this value using the “while” loop. We have added the “iostream” header library to initialize our code and make use of some input and output streams. The execution will be started from the main() method and the initialization of two integer variables “val” and “total” has been done within it. We have used the cout object statement to let our user know that he/she has to input some value now. The cin object statement has been used to take input from the user and store it to the variable “val” which was currently null.

We have compiled our code with “G++”, Ubuntu’s compiler for C++ language as per the shown command. After the fruitful compilation, the code has been executed with the “./a.out” instruction of the shell terminal. The user has been asked to input a value and he/she has added 4 as an input. The sum “10” has been calculated within 4 iterations as shown in the comments of the program.

Within our first example, we have taken a single value and incremented it by another variable value to get the sum. Within this example, we will be calculating a sum of a specified number of values added by the user on the shell as an input. Thus, we have been updating the old C++ code again by opening it in the nano editor. Added the “stream” library and started the main() function. Declared two integer variables “val” and “n” and initialized “total” integer variable to 0. The cout statement is here to ask the user for inputting the value of the “n” variable i.e., a total number of values he/she wants to calculate the sum of.

The cin object statement is here to get input from the user as some numerical value and save to the variable “n”. The next cout object statement is here to ask the user for all the number values that he/she wants to calculate a sum. The “while” loop will be initialized to check if the value of variable “n” is greater than 0 i.e., to iterate the loop. Until the value of “n” is not 0, it will continue to get the values from the user as an input within the variable “val” via the “cin” standard statement. The value added by a user in “val” will be an increment to the variable “total” as the sum of values i.e., total = total + val. Along with that, the variable “n” will be decremented by 1 to complete the “while” loop. After the loop ends, the sum of all the values added by the user as input will be displayed on the shell using the “total” variable.

The code will get compiled again with the G++ compiler for C++. On code execution, a user has added several values he/she wants to calculate the sum i.e., 10. After this, the user has added 10 number values separated by space on the shell. In the end, the sum of all the 10 values has been calculated and displayed on the shell i.e., 138.

Let’s have the last example to get the sum of values using the “while” loop. We will calculate the sum of digits in a numerical value through modulus i.e., dddd = d+d+d+d. Within the main() function, a user has been asked to add a numerical value through the cout statement. The user will input some value in the shell via the cin statement that will store the input in the “n” variable.

The next cout statement is letting us know that the sum of digits in value just added will be calculated. For this, the “while” loop is here to check if the value “n” added by a user must be greater than 0. The modulus of value “n” will be calculated by dividing it to value 10 and the resultant modulus will be saved to variable “val”. The value of variable “val” will be incremented in the variable “total” value as a sum. The value “n” will be divided by 10 and the resultant will be saved again to variable “n”. The whole procedure has been done to convert the inputted number into digits and to sum up the digits together. After the “while” loop, the sum of digits in a number will be displayed i.e., total. 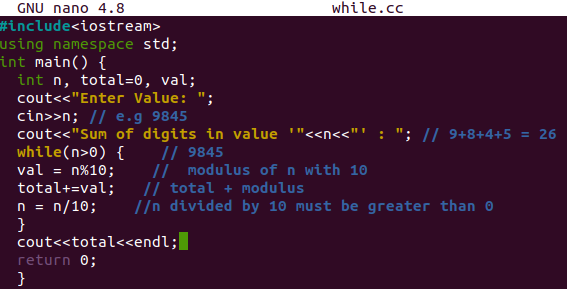