“The function is a collection of statements that work together to accomplish a goal. A function in R is an object which allows the R interpreter to transmit control and parameters to the function. The function then completes its duty and returns control as well as every result that may have been saved in other objects to the interpreter. With examples, this article demonstrates how to use the WHICH function in R. The which() function in R returns the position of all TRUE items in a logical vector.”

What is the which() Function in the R Programming Language in Ubuntu 20.04?

Syntax of the which() Function in the R Programming Language in Ubuntu 20.04?

Some arguments are required for the which function. We have discussed below each argument’s functionality in R.

x: x is a logical array or vector. NAs are acceptable but not required (as if they were FALSE).

arr.ind: When x is an array, should the array indices be returned?

ind: A vector of integer-valued index values, as a result of which (x).

.dimnames: It is a set of character dimnames that is optional (.). If true, useNames will be utilised to build dimnames using arrayInd() (and therefore, which(*, arr.ind=TRUE)). These will be utilized as column names if names(.dimnames) are not empty. Row names are.dimnames[[1]].

useNames: It is a logical parameter that indicates whether or not the arrayInd() value should have (non-null) dimnames.

Inside the R prompt, we have called the which function. The which function takes random alphabets respectively. From this which function, we will get the position of the specified letters alphabetically. As “letters” is a built-in constant that contains all 26 characters of the English alphabet in sequential order. The above outputs indicate the location of each character. As you can see, “s” is the 19th letter in the alphabet, followed by other letters which also generate their position, respectively.

The position of the input elements is returned by the which() method. As we have seen in the last example, you can also specify requirements for the function and retrieve the output places that match those conditions. The which() function is used to return the positions of some items of the defined vector in the example below.

We have specified the iris dataset to the variable df. The df is called inside the head function, which displays the first few entries of the iris dataset corresponding to each column as we came to know that the iris dataset contains four numerical columns and one categorical column. Now, in another variable, “Result”, we have called the which function where the sapply() method is also deployed.

To the sapply() method, we have provided the dataset variable df and the “is.numeric” argument. According to the specified criterion, the which() function returned only numerical column names. 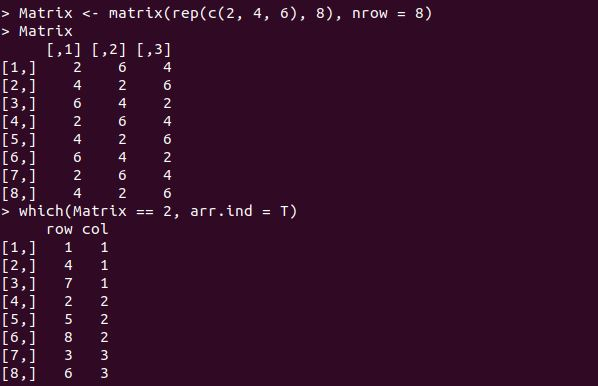 Here, we have constructed the three columns and the four-row matrix with the matrix function. Then, printed the values of the full matrix. To identify the location of element 2 according to the above matrix, we have used the which() method. The arr.ind argument is set to TRUE for this which() function. The occurrence of the value 2 in the given matrix is generated.