Tar is a powerful archiver that is frequently used for collecting files and archiving them. It was created to produce archives for data storage on tapes, thus the name “Tape Archive”. It was initially included in UNIX version 7 in 1979, and it is currently accessible on a variety of systems.

Before we go into the situation’s specifics, let’s define Archive files so that no Linux newbies are left out. Archived file is a combination of multiple files with metadata information. By combining multiple files and their information into a single file, you may improve the storage and mobility of your data. The basic purpose of Tar is to combine the data but you can also compress the data using other utilities. These compressed files are referred to as Archive files, and they assist users to reduce file size and simplify data management. The tar is one of the must-have utilities for managing various files in Linux.

How Tar file works in Linux

To understand the basic working and syntax of a tar utility, you need to type the below-given command in the terminal: 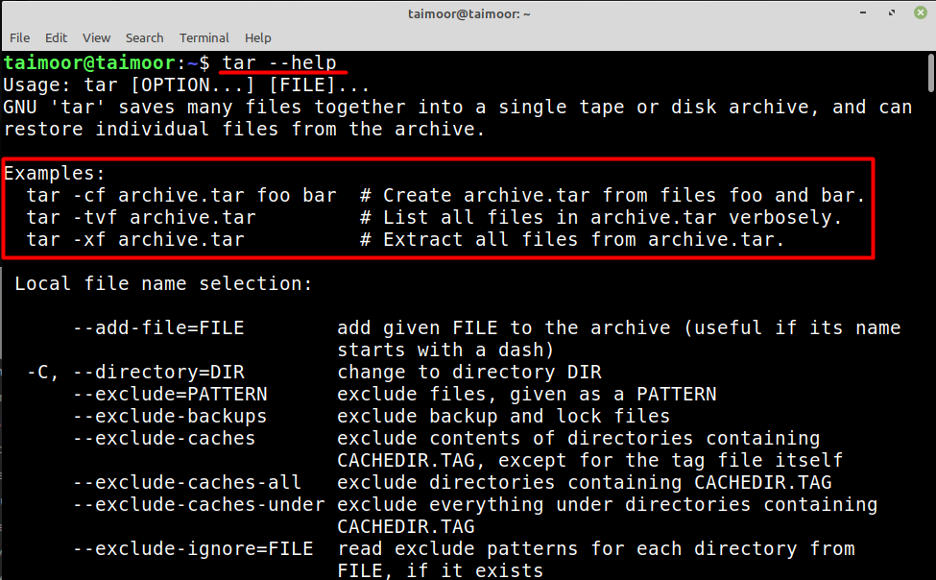 You will see all the details after entering this command in the terminal that we will also discuss in this article. So after looking at the image you can find the basic syntax of a tar file:

As you can see that the tar utility is already installed, and its current version is 1.30, but if by any chance this utility is not installed in your system, then you can do that by entering the command:

Some useful options that are used with the tar command are listed below:

How to make a tar file

To give you a basic understanding of creating a tar file, we have created a folder with three text files that you can see in the documents directory, as shown below.

The next step is to make a tar file that is possible by typing.

Or you can also type:

The above commands are used not only to make a tar file but also compress them in the same folder where the files are present, and you can see that these two commands have created a tar file with .bz2 and .gz format. Also, the asterisk sign (*) ensures that the tar file should include all the files in the current directory in a sequence. Later you can verify the newly created compressed tar file by opening a folder as shown below.

How to extract a tar file

So, if you have downloaded a .tar file from the internet or someone else sends you then you can extract its content by typing.

How to view the content of a tar file

If you have a tar file but you only want to see its content and don’t want to extract it then you can do that by typing.