The main function in a C program returns 0 because the main() method is defined and imported first when the code is run in memory. The very first commands within the main() function are implemented. Until all commands of code have been accomplished, the program must be removed from memory.

Return 0 indicates that the program implementation is accomplished and that the processor can now be uploaded. Even if we can’t complete the task, the uncertainty persists due to the fact that when the program’s implementation is ended, the return void command would run immediately. It fluctuates between compilers and ends the application as well as through external memory.

As a result, we must terminate the program ourselves and utilize return 0 to properly halt the execution. In this artifact, we would go through return 0 in detail.

Use return 0 within the main function

We are returning 0 because the main function produces a numeric value (int main()). The term return is being utilized to return a result with a function. This signifies that the program have been completed accurately, and we can use the return statement to end the main function. When the main function would be of the data type “integer,” it must return something. 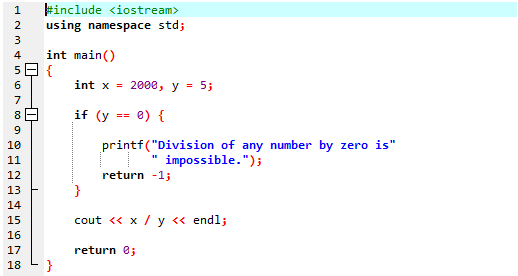 At the beginning of the code, we integrated header file #include <iostream> along with the standard namespace. Then we initialized two variables and assigned them with different values in the body of the main() function. The variable ‘x’ is given 2000 and variable ‘y’ is provided 5.

After that, we utilized an if-else statement to check whether the given number is divided by a zero or non-zero integer. If the denominator is equal to zero then the fprintf() function prints the statement ‘Division of any number by zero is impossible’. Otherwise, we employ the ‘cout’ statement to get the result of the division of the defined numbers.

In this code, return 0 indicates that the code has been implemented effectively and has accomplished its objective. A return 1 indicates that there would be an error in the program’s implementation, so it is not operating as planned.

We get the result of dividing two numbers ‘2000’and ‘5’ after running the above-mentioned code.

Use return 0 within the user-defined function

As the user-defined function declaration mandates return 0, so we must utilize return 0, or return -1 within each C program. If we wouldn’t directly declare a value, the assembler automatically includes a return 0; so it is optional to insert a return 0.

The return value is the program’s exit status which may be retrieved and used by the terminal or other such software that executed it. The subsequent code validates how to utilize return 0 and return 1 within the user-defined function.

First, we introduced the header file <iostream>, and then we used the standard function of the namespace. In the next step, we created a utility function to check the age. We pass the specified age as a parameter to this function. This method returns 1 or 0 based on the provided age.

Here we utilized the variable ‘a’ for age. If-else condition is applied to acquire the age. The Boolean data type is considered a specific data type in the C language, with only two different values: true and false. Because the values 1 and 0 will be of the data type integer and are not automatically converted to Boolean, thus return 0 within a function reverts false.

Similarly, a function that produces true is denoted by return 1. In addition to this, we employ a user-defined function to check the entered age. This function holds the argument of age which is represented by the ‘a’ variable. Moreover, we apply the if-else condition to the function ‘chAdultUtil’ to check the condition of the required age. The ‘cout’ command has been used to print the statement.

After all this, we are going to start the coding in the body of the main() function. Here we initialized the variable ‘a’ for age having integer data type. The user-defined function is called and we provide age to this function. In this situation, the return statement terminates the program’s completion, and the implementation state is either 0 or 1.

In this article, we have elaborated on two different situations in which we utilized the return 0 statement. When we use return 0 within the main function, it means that the code has been implemented successfully. On the other hand, when we utilize the return 0 statement within the user-define function, this indicates that the user-defined method recurring false. Because the C language somehow doesn’t handle objects, classes, or errors, some status codes have been used as a precedent for a while. Return codes involve multiple standards based on the operating system. If any invalid activities are conducted, the operating system may interrupt the code with certain return status codes.