Kubernetes is practicable and extensible, that is providing a platform for handling containerized capabilities and services, enabling both declarative formation and computerization. It contains a large, fast-growing system. Kubernetes facilities, support, and implements are extensively used. We can use the command-line tool kubectl to execute the commands in contradiction of Kubernetes clusters. We utilize the kubectl to organize applications, achieve resources, and check the logs. Kubectl is the field for controlling Kubernetes. This can be used to accomplish any Kubernetes operation. Kubectl is acting as a client of the Kubernetes concerning a practical point.

First, we have to check our operating system. We have to utilize the Ubuntu 20.04 operating system in this situation. On the other hand, we see further Linux distributions, depending on our requests. Furthermore, make sure that the Minikube cluster is an important constituent for running Kubernetes services. To implement the instances smoothly, we have a Minikube cluster installed on the laptop.

For starting the Minikube cluster, we need to open a terminal on Ubuntu 20.04. We may open the terminal by these two methods:

We can efficiently open the terminal by selecting one of these techniques. Now we have to launch Minikube. To do this, we run the following command. These commands are run in the terminal.

This process takes a little time, and it is not recommended to exit the terminal till the minikube begins to work. We can also upgrade the minikube cluster.

Kubectl has different ways of facilitating waiting for items we want to organize or remove. We utilize the ‘wait’ command to recess until the pods meet the requirements.

Use kubectl apply to relate the variations to the cluster and wait a randomly set amount of time (60 seconds) to check the status of the pod. At this point, we expect the fresh deployment to be active and the old one removed. This was hacked, as the customary SRE saying is that optimism is not a strategy, and we identified it, but it wasn’t a sufficient priority to discover an alternative.

The command kubectl wait for = condition = available is waiting for a definite state; thus, we cannot currently instruct more than one condition. We utilize the wait command. This ends the command when the object resource is upgraded.

We have to set the value for the selected condition. A simple approach to do this is to check the Kubernetes event by using the kubectl get pods. We wait for the pods to be terminated, and then we use the ‘kubectl get pods’ command to know about the status of different pods. The deployment is created effectively. Here we utilize the succeeding command to enlist the pods. We want to observe the status of definite pods by using the command in this instance: 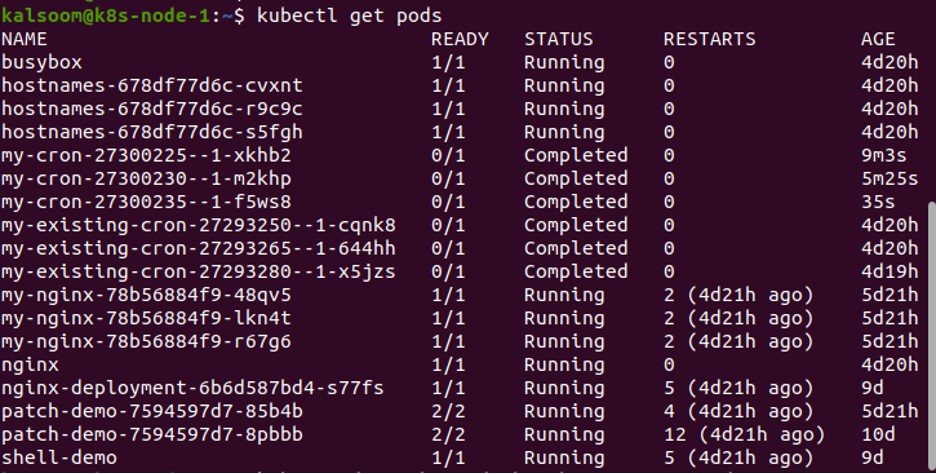 By executing the above-mentioned command, we get the name, ready state, status, restart state, and age of different pods.

Alternatively, we want to define the resource and deliver the relevant event using Kubectl describe pod; the preceding portion is devoted to the proceedings of this resource.

This step executes the command ‘kubectl describe pods/busybox | grep condition’ in the terminal. Scroll to the bottom of the terminal to get the actions that happened in the pod. Now that pods are in progress.

After running the command ‘kubectl describe pods’, it displays the status of the pods when we apply different conditions on the pods. We observe the status until the status is informed. Updating the status means that the task has been completed by certain status conditions. If the execution finalizes effectively, it will be informed as complete directly. However, if the task fails, the pod will spontaneously restart; nevertheless, the restart Policy is failed. Though, if it has not been simplified as “Complete” since the first update, the status of the pod can be considered “Failed”.

In this article, we have observed the result of executing the ‘for’ condition on kubectl. We run the command ‘kubectl get pods’ to enlist the pods and get the information of these pods. We also get to know about the status of different pods after running the command.