Arduino is a microcontroller-based development platform for building multi-dimensional projects. When it comes to building Arduino projects, Arduino offers a wide range of flexibility for deciding input power source. Most of the Arduino boards can be powered up using three ways: USB, DC barrel jack and Vin pin on Arduino board. Vin pin is one of the major sources for powering Arduino boards, let’s discuss Vin technical specification in detail. 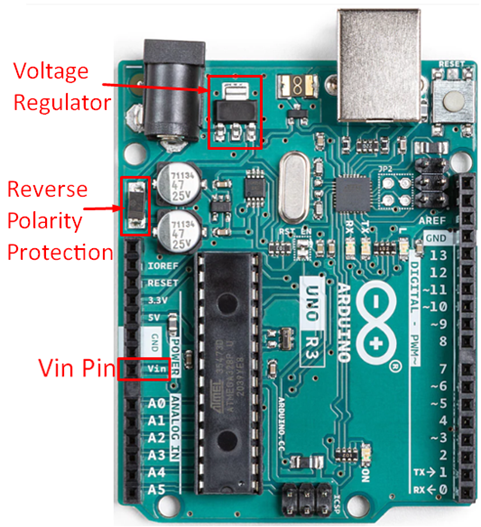 Another important thing to note is Vin pin is directly connected to on board voltage regulators which means Vin pin has no reverse polarity protection for current, as it bypasses the diode circuit attached with DC barrel jack. While connecting Arduino through Vin pin wires polarity must be taken into consideration otherwise a single wrong connection can burn the Arduino board.

Like a DC barrel jack, Vin pin has also regulated voltage supply, so minimum and maximum voltages we can apply to Arduino boards are determined by an onboard voltage regulator. When giving supply to Arduino using Vin pin some voltages are lost in the 5V regulator in the form of heat dissipation. Minimum voltage which Vin pin requires for optimum and smooth working is 7V and it can handle a maximum of 20V, however the sweet spot for Arduino Uno Vin pin voltage is somewhere between 7-12V. Like the 5V regulator Arduino has also a 3.3V output pin which takes power from the 5V regulator and further reduces it down to 3.3V.

Vin voltage ranges vary from board to board here this table will give an idea of some most popular boards and their voltage ranges Vin pin can handle:

Vin pin currents limits can be determined by onboard voltage regulator circuit, usually Arduino has rated for 1A of maximum current it can handle through Vin. While regulating incoming voltages, Arduino on board regulators also take some current normally around 50mA.

Voltage regulators can hold up to 1A of current but as they heat up, they will automatically reset the Arduino board until cool enough to power the Arduino again. So a stable voltage supply with optimum current range can work with Arduino for a long time.

Note: Generally, Vin pin has no current limit, the only thing that limits current for Vin pin is voltage regulators as they reduce incoming voltages, they heat up which in turn resets Arduino automatically.

Arduino provides multiple ways of powering it is using different power sources. Vin pin is one of them as it gives freedom to Arduino users and enthusiasts to drive their project using a stable external supply for the long term. This pin can provide Arduino boards with input regulated voltage supply or can act as a power source for external peripherals attached to Arduino boards.