Vim is a text editor for creating or modifying any text, script or configuration file and it is the advanced version of vi editor. This editor is installed by default in most of the Linux operating systems. Many new features are added in vim editor which are not available in old vi editor. One of useful features of vim is syntax highlighting. The readability of any source code or configuration file can be increased by using different front and color for different part of the file. This task can be done by using syntax highlighting feature of vim. This feature can be enabled or disabled temporarily and permanently. How you can enable or disable this feature and work with it in vim editor on Ubuntu is shown this tutorial.

Run the following command to check the version of the installed vim editor.

Create or open any script file in vim editor to check the current look of the file content before enabling syntax highlighting. Here, a bash file named login.sh with the following content is used.

Run the following command to open the file in vim editor.

You have to create or edit .vimrc file and add command text to enable syntax highlighting permanently in vim editor. Run the following command to open .vimrc  file by using vim editor.

Add the text, “syntax on” anywhere in the file to enable syntax highlighting permanently for vim editor. Save and close the file by typing ‘:x’.

For disabling the feature, just re-open .vimrc file, change the text “syntax on” to “syntax off” and save the file.

The following output shows that the installed vim package contains 18 color scheme that can be applied in the vim editor. The use of some color schemes is shown in the next part of this tutorial. 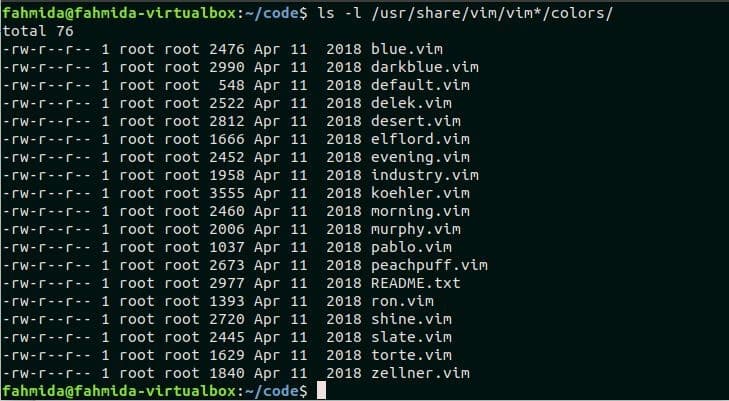 Suppose, the user wants to change the color scheme for a html file named hello.html with the code.

Run the following command to open the html file from the editor.

Press ESC and type “:colorscheme morning” to change the current color scheme of the file.

The looks of the editor will be changed like the following image after applying the new color scheme. But this change is temporary and the color effect will be removed after closing the editor.

If you want to set a particular color scheme and background for the editor permanently then open .vimrc file again and add the following command text. Here, evening color scheme will be set for syntax highlighting and the background color is set to dark.  Save and close the file by pressing, 😡 to apply the color effect in the editor.

Now, re-open the html file in the editor to check the color scheme and background color effect. The editor will look like the following image.

Type “:syntax=perl” after opening the file and press Enter. The text color of some part of the file will be changed by the syntax of the perl language like the following image. Here, the colors of input, int, print and round text are changed.

There are nine syntax highlighting groups for vim editor. These are mentioned below.

Type “:hi Statement ctermfg=red ” to change the color of programming statements of the script into red color.  Here, the color of if and else is changed to red.