Vim is a very useful and helpful editor for creating and editing different types of files more efficiently. Many new features are added in this editor that makes it a powerful editor. Many plugins are developed by many coders for this editor to increase and configure its core functionalities. Some of them are Pathogen, Syntastic, indent guides, Fugitive, Git Gutter, etc. Git is a distributed version control system (DVCS) that helps the developers to manage the modified source codes over time. It is totally free to use. Using git command, the track changes and the revision history of the source codes can be easily traced. Git command works in the command line interface. The vim plugin named fugitive plugin is developed by Tim pope which is used to work with the git tool without terminating the editor. So, vim and git can work together by using the fugitive plugin. How you can install and use this plugin for vim is shown in this tutorial.

Before starting this tutorial, you have to check the git is installed on the system or not. Git is not installed by default on Ubuntu operating system. Run the following command to install git on Ubuntu.

Run the following command to install the fugitive plugin on Ubuntu.

A text file named employee.txt is used to test the uses of the fugitive plugin in this tutorial. The content of this file is given below.

‘git add <file>’ command is used to add modification in the current working directory and add the file in vim buffer. It informs git command to add the update in a particular file after running ‘git commit’ command.

The command, ‘git commit’ will require to run for saving the updates of any file in the local repository. Run the command from the terminal.

Remove the ‘#’ symbol from the line, ‘modified:  employee.txt’ file to save the changes of this file. 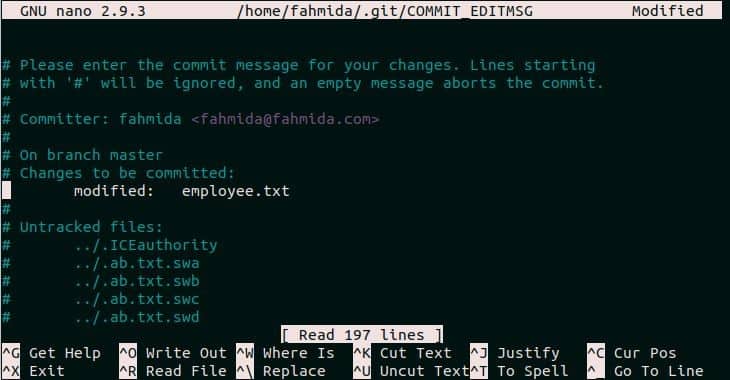 ‘git blame’ command is used to show the details of the most recent modification of any file for each line. Run the command from the terminal for the file, employee.txt.

It will show a similar output like the following image.

You can get the same output of the above command from vim editor by using ‘:Gblame’ wrapper of fugitive plugin. You don’t need to the terminal the editor to do the task. Open, ‘employee.txt’ file in the vim editor by running the following command.

Press ESC and :Gblame to retrieve the recent modification information of the file in the editor.

You will get the following formatted output after pressing Enter key.

Open employee.txt file and press ‘i’ to enable the INSERT mode. Modify the file by adding an entry for the employee, ‘11006’. Press ‘ESC’ and ‘:x’ to save and close the file.

Re-open the file, employee.txt in the vim editor and type ‘:Gdiff’ and press Enter to find out the difference between the current commit and the previous version of the file.

The following output will display after executing the ‘:Gdiff’ command. The newly inserted record will be displayed as highlighted text to show the difference.

‘:Gread’ command works as the alternative of ‘git checkout <file>’ command. It can also take the argument of any revision file like ‘:Gdiff’ command.

When this command is executed for the current version of the employee.txt file then it will show the following output. The file contains 6 employee records and the output shows the text ‘6 more lines’.

‘:Gstatus‘ command works as the alternative of ‘git status’ command.  It shows detail information about the status of all files or the current file. There are many custom key to interact with the status window. Some of them are D, cc, <C-p>, <C-n>  etc. Open employee.txt file in the vim editor and run ‘:Gstatus’ command.

‘:Gmove’ command works similar to  ‘git mv’ command. It is used to rename any existing file from vim editor. Suppose, you want to rename employee.txt file by emp.txt. Open the file in vim editor and type the following command and press Enter to rename the file.