Variables in any programming language act as temporary storage spaces for keeping different types of data in them for processing. A variable generally has two different entities associated with it, i.e., its data type and its value. The data type is the actual type of data stored in a variable, whereas the value refers to the actual data stored in the variable. However, in Bash programming, you do not need to state the data type while declaring a variable explicitly. It is so because this programming language itself detects the data type. For example, whenever you assign a number to a variable in Bash, it will automatically be treated as an integer.

A Bash script can be used to perform certain operations on your computer system. However, a simple Bash script can also be written without using any variables, i.e., printing a message on the terminal or using a built-in command like “date”, etc. But whenever you need to temporarily hold some values for manipulating them later on, you must use the variables in Bash. By now, you must have realized that today’s discussion will revolve around the variables and their usage in the Bash programming language.

How to Declare a Variable in Bash?

A variable in Bash can be declared with any name of your choice followed by the equality (=) symbol and any value of your choice assigned to it. Some examples of simple Bash variables are shown below:

This example refers to a String variable in Bash. We have opened the terminal and declared the variable as presented in the below-attached snapshot.

To get the output using the “Echo” keyword as:

To an Integer variable in Bash. We have opened the terminal and declared the variable as presented in the below-attached snapshot.

Now to get the output use the “Echo” keyword as:

This example refers to a character variable in Bash. We have opened the terminal and declared the variable as presented in the below-attached snapshot.

Now to get the output using the “Echo” keyword as:

The best thing about the Bash programming language is that you do not need to state the data types while declaring variables explicitly. In other words, there are no specific data types in Bash. Rather the data type will depend on the exact value you will assign to a particular variable in Bash.

However, if we take the variable type in terms of the purpose according to which that variable is used, then there are four different types of variables in Bash, which are as follows:

Environment Variables: These variables are required to set up the Bash environment in a certain way for certain programs to work properly. Now to display the environment variable on the terminal, follow the subsequent command.

The output will look the same as presented in the attached image. 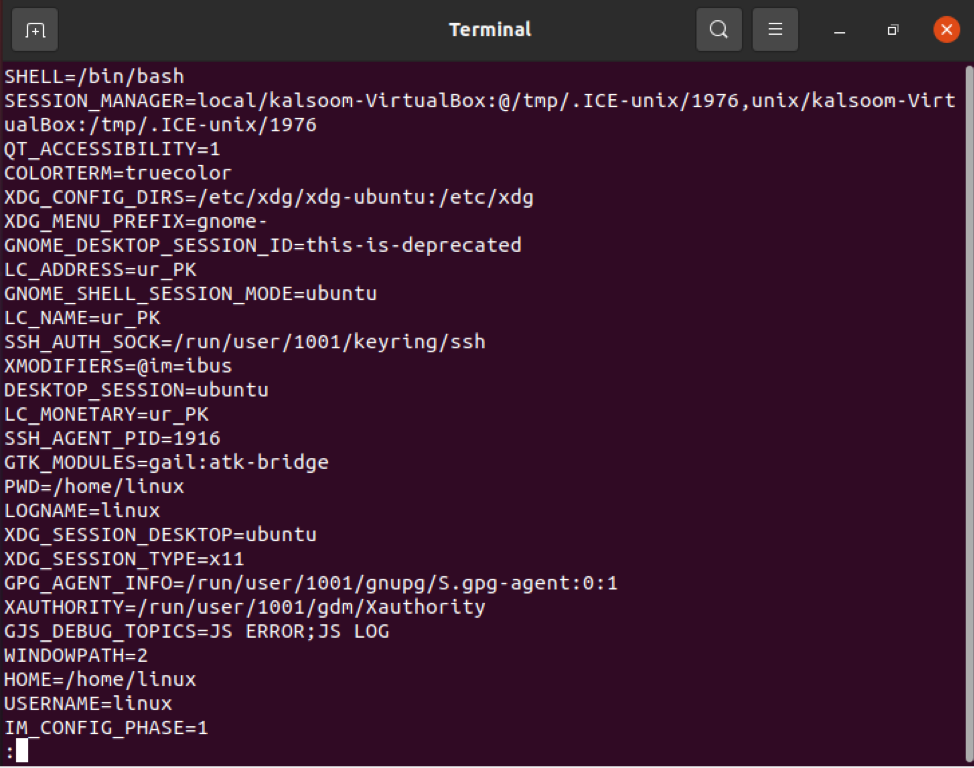 Shell Variables: These variables are an essential component of Shell that enables it to work properly.

Bash programming also allows you to substitute the value of a variable with the output of a command. In other words, you can execute a built-in command within a Bash script and store its output in a variable within that Bash script. For example, _today=$(date). This statement will store the current system date and time to the _today variable.

As the name implies, a special variable in Bash is there to perform a special operation. In other words, you can say that these are built-in Bash variables that control the flow of execution of your program in a certain way. Some of the most frequently used special variables in Bash are listed below:

To get a basic understanding of all mentioned special variables, we have used them in this example script. Initially, the “special.sh” file was created using the “touch” query.

You can view it in the working directory, i.e., the home directory. The script shows the usage of all special characters. You can modify it as well.

To get output to execute the command with keyword “bash”.

The output can be seen in the attached snapshot.

Other than the ones mentioned above, there are other special variables in Bash too that serve different purposes within a Bash script.