Variables in Bash can be a character, a number, or any string that is nothing more than a pointer to actual data. You can specify any value such as a filename, device name, text, number, or data type. Shell has multiple options to create, edit, and execute the scripts easily. Assigning multiple variables in a Bash script makes your code look compact and benefits better performance. Assigning variables in one line of code in languages such as PHP, Python, etc. is easy. In this tutorial, we will give you the complete brief on the variable assignment in Bash.

Entering a variable in the Bash script is simple, so let’s start with a simple example to print a variable:

#!/bin/bash
NAME="Mr.Valuable"
echo "Name of the content write is $NAME"

Once we execute the script, it automatically prints the entered variable in the output:

Next, let’s create a script to give a clear overview of the variable assignment in Bash. For example, if we want to assign multiple variables, we can use the following script:

You may get the following result by executing the script in the terminal:

Similarly, you can assign the numbers to print the script’s output accordingly. For instance, you can change the value of “X” and print them in the terminal through the following script: 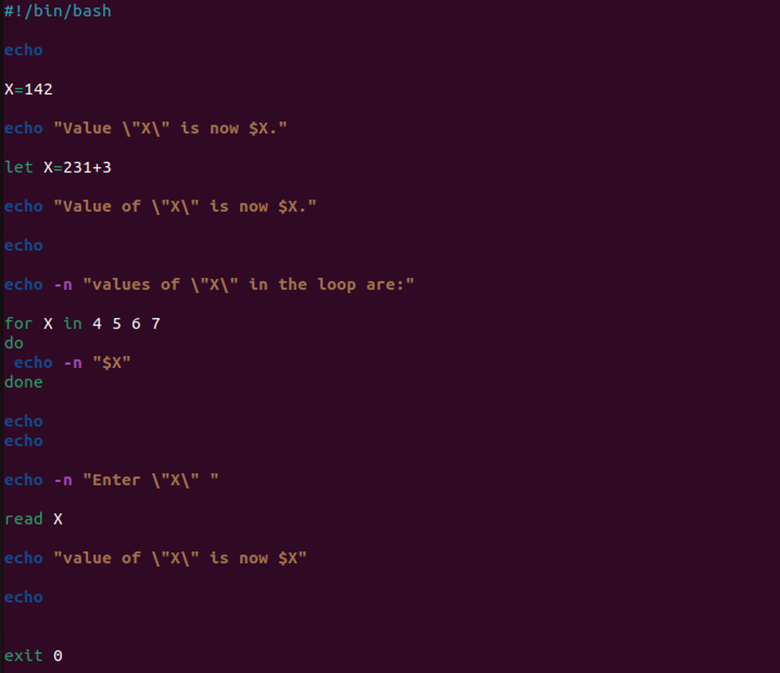 Now, let’s execute the script, and the system will ask you to assign a variable to print the output:

This is how you can assign the variables in the Bash script. The read command is simple and prints the input in the terminal. Moreover, we also included a different example to explain the variable assignment in Bash. If you want to know more about the Bash-related stuff, don’t worry because Linuxhint has everything for you.