“Spammers, intruders, and hackers are everywhere over the internet. Sharing encoded file have become so prevalent that even the nonconfidential files are shared in encoded form. Sharing encoded or encrypted files over the internet enables you to share the information safely. Even if an intruder gets the file, he cannot get what the file contains if the information in it is encoded. In this short manual, we will learn about the uuencode command in Linux and also learn to install it in the ubuntu 22.04 system. We will briefly define the meaning and purpose of the uuencode command, and we will also demonstrate the simple commands to use the uuencode.”

The uuencode is a Linux command used to encode a binary file to share through the internet via email. It converts a binary file to ASCII code and sends the encoded file to a remote system using electronic email. It takes an input file which is a source file of data, encodes the data in the file, and returns the standard encoded output. The encoding format used by the uuencode command only includes printable ASCII characters. It includes the remote file name and also the mode of the file so that the binary image of the encoded data can be recreated on the receiving side of the remote system. To decode or recreate the original binary image of the data, uudecode command is used in Linux.

Syntax of uuencode Command in Linux

The syntax of the uuencode command in Linux is given below for your understanding:

The uuencode flag in the syntax is the main command that will perform the function in the Linux operating system. The source file represents the input file that contains the data that needs to be encoded and shared via electronic mail. The output file represents the name of the file that the decoded file will have after decoding the date on the remote server. However, the uuencode also takes input from the standard terminal and gives output at the standard terminal. This can simply be achieved with the /dev/stdout instruction with the uuencode command. We will guide you on how you can do this in the coming sections with the help of examples.

How to Install the uuencode Command in the Linux Operating System?

The uuencode is not preinstalled in ubuntu, so you manually have to install it using the apt install command. You can ensure whether you have already installed the uuencode package installed in your ubuntu system or not by executing the following command:

If you do not have \ uuencode installed already, you will get the following output:

After the successful installation of sharutils, you will get the following result: 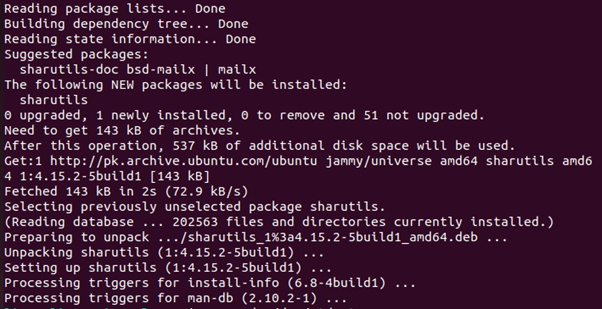 As we have installed the sharutils, we should get the exact path where the uuencode command is located in the package. Let us confirm this in the output result given below:

Now let us explore some examples to understand how to uuencode works in the Ubuntu or Linux operating system.

When you press enter after typing this command, the system will prompt you to enter the input data:

Now type the data or information that you want to encode using the uuencode command. We type the following line:

This is the ASCII conversion of the input we provided above.

This will create a binary file named “input.tar.gz” in the “downloads” folder:

Now, provide the input file name to the uuencode command and encode the binary file into ASCII code and print the encoded data on the terminal. Here is the command that will perform this function:

This will convert the data of the binary file “input.tar.gz” into ASCII and give the result back in encoded format. See the ASCII code of the input file below:

This is the encoded ASCII data on the standard output.

In this article, we explored the uuencode command in Linux. The uuencode command is used in the Linux operating system to convert the binary file into an ASCII code. It only uses valid printable ASCII characters for encoding the input data. You can give the input on the standard terminal and get the standard output, or you can use a binary file to give the input and print the encoded ASCII on the terminal. The examples will help you perform these functions easily.