The utime() function can only be used by the programs with the right privileges, file, or directory owner. In this tutorial, we will represent how to use this “utime()” function in C language by demonstrating the different examples.

Syntax of the Utime Function in C Language

Here, in this syntax, we have two different parameters for the utime() function:

We preform these given instances in Ubuntu 20.04. For this, we must install the gcc in our Ubuntu 20.04. After installing, we write some code in which we utilize this “utime()” function in our C program and you will easily learn how it works. In the code, which is given in the following image, we first add some header files such as “<stdio.h>” which is used for printing on the screen, and the “<utime>” for setting the updated time for the file or directory identified by the path.

After this, we put the “main” function of the “int” data type. Inside this, we declare an “int” variable with the name “argc” and a “char” array with the name “argv[]”. Now, we utilize the “if” statement here in which we put the “if” condition. Inside this “if” condition, we put the “utime ()” function by following the syntax of this function. The “utime” function’s parameters are “arg[1], Null”, where “arg[1]” represents the “path” and “NULL” represents the “times” parameter which is not equal to zero and the “argc” value is greater than “1”. Then, print the line which we write in the “printf” statement and print the “argv[1]” value with this. Otherwise, if the condition is false, ignore the statement which is written inside the “if” curly braces and print the statement which is given outside the “if” curly braces.

After this, we have the “return” statement. Now, when this code is completed, we must save our code with the “.c” file extension.

We can get the output of the previous code by typing some commands in the terminal as shown here. In the output, it prints the statement which is written outside the “if” statement. So, it means that the “if” condition is not true.

In our next example, we put some header files which is necessary for this code. Then, we call the “main” function which is of the integer data type. We declare the “int” with the name “fd” and declare a “char” array of the name “fn[]” and initialize it with “utimes.c”. We have a “struct” with the name “utimbuf” which is used for specifying a new access and modification time for a file.

Here, the condition is that if the “utime (fn, &ubuf)” function is not equal to “0”, execute the “perror” function. If this condition is false, it executes the else statements where we have the “puts” and “system” statements. After this, we have an “unlink” function outside the “if-else” condition. This “unlink()” function removes the file name if all the overhead situations are false. 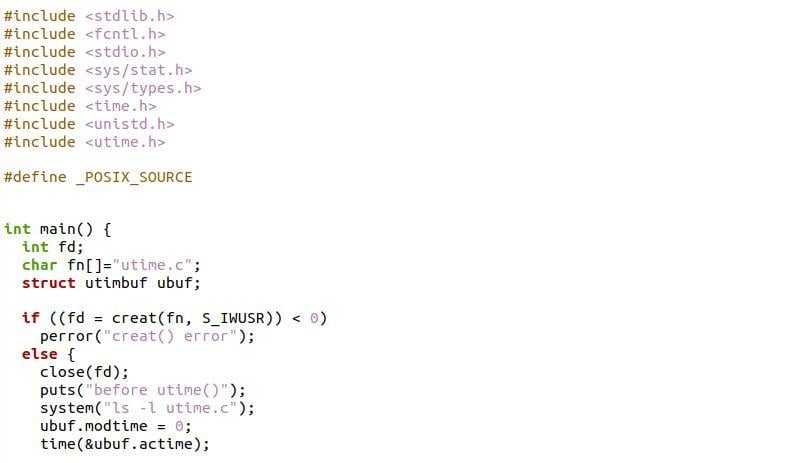