If you are using a Linux system, you might already know how crucial a shell interface is for interacting with your system. On most Linux distributions, Bash is the default shell that we use to run commands and execute scripts. A shell script is a set of commands that, when executed, is used to perform some useful function(s) on Linux. This .sh file, written by a user, contains all the commands used to perform a task so that we do not have to run those commands manually, one by one.

In this tutorial, we will explain two of the most useful bash expansions used in shell scripts:

An expansion in Shell is performed on the script after it has been split into tokens. A token is a sequence of characters considered a single unit by the shell. It can either be a word or an operator.

We have run all the examples and scripts mentioned in this article on a Debian 10 Buster system. However, you can easily replicate them on most Linux shells. We are using the default Debian command line, the Terminal, for this tutorial. On Debian, you can access it through the Application Launcher search bar as follows: 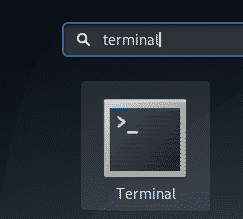 To access the Application launcher, simply hit the Super/Windows key on your keyboard.

According to the official GNU Bash Reference manual:

For example, the following echo commands substitute the date command’s output as their input:

You can also use command substitution to assign value to a variable. For example, we will print today’s date through the variable TODAY as follows:

The above examples are a few ways in which you can utilize the power of command substitution in your shell script. Here is a sample status report that we can print using the following shell script:

Command substitution has been used thrice in this script; in printing the date, logged in users and uptime. We saved the script as follows:

Made it executable and then ran it through the following command:

Here is the output of our status.sh script:

You can, of course, create more meaningful scripts by following the examples we have just mentioned.

Parameter expansion/substitution is the process of fetching the value from the referenced entity/parameter. It is like you are expanding a variable to fetch its value.

The simplest possible parameter expansion syntax is the following:

Here is how you can use the parameter expansion in Bash:

For example, the simplest usage is to substitute the parameter by its value:

This command will substitute the value of the variable “name” to be used by the echo command:

You might be thinking that the same can be achieved by avoiding the curly braces as follows:

The answer is that during parameter expansion, these curly braces help in delimiting the variable name. Let us explain what we mean by limiting here. Let me run the following command on my system:

Here are all the ways in which variables are substituted in Shell:

The above examples are a few ways in which you can utilize the power of variable substitution in Bash. You can incorporate these ways to use expansion in your shell scripts to optimally achieve your task at hand.