The readahead() system call stores a document inside the page cache while working on the Linux operating system. Whenever the Linux kernel reads documents from a disk, it executes a readahead simulation. Whenever the demand for one portion of a document is generated, the kernel immediately reads the next portion of the document. For example, if another demand for that portion is created later while reading a document consecutively, the kernel will automatically return the required information. Such optimization is relatively inexpensive since disks have track caches (apparently, hard disks are doing their readahead from within), and documents are usually spread out sequentially on the system. A wider readahead window could favor a consecutively accessible document, whereas readahead could be unnecessary overhead for a spontaneously accessible document. The kernel automatically adjusts the length of the readahead frame in reply to a success rate within that frame, as mentioned in Kernel Internal parts. A bigger frame would’ve been preferable if there were more strikes; a narrower screen would’ve been preferable if there were fewer hits. The madvise() framework call enables the program to control the window size immediately.

Whenever the Readahead() system call gets successful, it yields 0 on completion. If it doesn’t complete itself, it will return -1 on loss through errno set to signify the mistake.

To use any system call, e.g., readahead system call, you must install the manpages-dev library to see its usage and syntax. For that, write out the below command in the shell.

Now you can see the readahead system call information using manpages by utilizing the below instruction.

Following the below screen will be opened showing the syntax and data about the readahead system call. Press q to exit from this page. 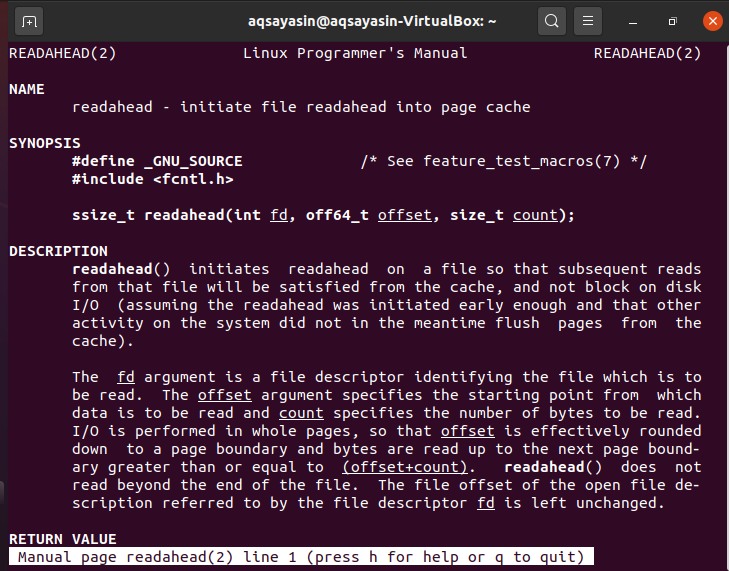 You have to include the “fcntl.h” library first while using C language code. The fd parameter is a document descriptor that specifies which document to be read from your Linux system. The offset parameter determines the reference point for reading the information, while count determines the total of bytes to be read. Since I/O is done in pages, offset is essentially adjusted downcast to a page frontier, and bytes become read up to another page edge approximately equivalent or more than to (offset+count). The readahead() system call doesn’t read the document to the top. The document offset of the available file definition alluded to it by the file descriptor fd is preserved.

If anyone wants to utilize readahead in the C language further, try out the below command to set up the compiler for the C language, the GCC compiler.

The readahead() system call returns directly after attempting to prepare the reads in the foreground. It can, nevertheless, pause while reading the filesystem schema required to find the required blocks.

Reading ahead is a technique for speeding up access to files by preloading with most of a file’s component in the page cache beforehand of schedule. Once spare I/O services are open, this could be accomplished. Predictability is the most important restriction for making the best use of readahead. Here are some characteristics of the predictability of readahead:

With a lot of Ram, the readahead system call has the below benefits:

The readahead() system call starts readahead on a document such that successive reads from such a document can be fulfilled from the buffer rather than blocking on I/O (supposing the readahead is started early sufficient as well as other device operation could not wipe pages as from buffer in the meanwhile). Although any readahead is normally beneficial, the best outcomes are determined by the amount of readahead performed.