You eventually hit the stage where data volume greatly increases when we start to deal with DBMS like MySQL. It is difficult for us to manage and use. MySQL has built-in capabilities that make it easy to handle. In MySQL, the LIMIT clause is being used to cut down the number of rows throughout the result set using the SELECT expression. We will discover how to use the MySQL LIMIT clause in this guide to restrict the number of rows that a query returns.

Here is the explanation of the LIMIT query:

Open the command-line shell of MySQL and type the password. Press Enter to continue.

Assume you have a table called ‘teacher’ in your MySQL database, as shown below. If you want to fetch all the records or rows of this table without any limit define, you will do it using the simple SELECT query as follows: 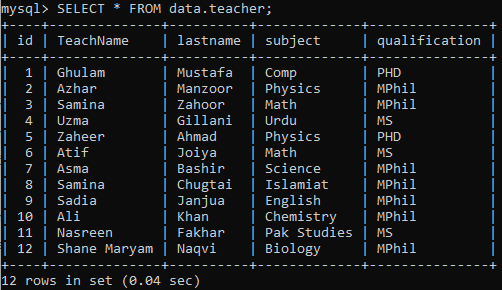 Example 01: LIMIT with Row Number Only:

If a user wants to fetch some records while limiting the number of rows, he/she can do it by using the simple LIMIT clause in the SELECT statement. Let’s try an example while utilizing the above table. Suppose you want to display only 6 rows from the above table while displaying the rows following the descending order of a column TeachName. Try the following query:

Let’s try the same table to define Offset alongside the row number. Suppose you need to fetch only 6 records from the table while the record returned must be starting from the 6th row of a table. Try the succeeding query:

Example 03: LIMIT with WHERE Clause:

Assume the table ‘same’ is located in the MySQL database. Fetch the whole table while sorting it in ascending order of column ‘id’ using the SELECT command along with ORDER BY as follows: 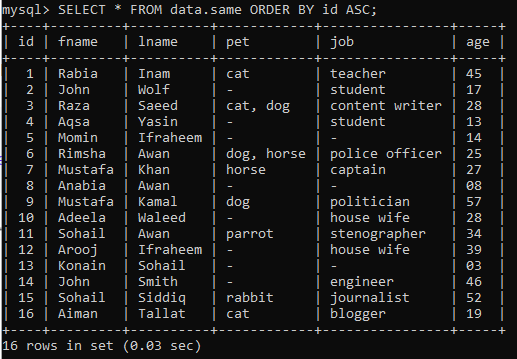 When we use the ORDER BY clause in the query without stating the order type, it will automatically fetch the record in ascending order as below.

To fetch a limited record in another sort order, you have to define the sort order. As we are fetching 8-row data using the descending order of column ‘age’.

We searched for the pattern ‘dog’ and got only 1 result. While we have more than 1 record of ‘dog’ in the table. Now we will fetch those records using the LIKE clause along with the LIMIT clause. To display the only 5 records of the table where the pet name starts from ‘d’, try the below query. As we have only 2 records for pattern ‘dog’, that’s why we have got only 2.

Let’s retrieve only 10 records from the table, where the pet must have ‘r’ at any middle location of its name. As we have horse, parrot, and rabbit in the pets having ‘r’ in their name, that’s why we have got only 4 records from this query.

To get 6 records of the table, where the pet name must have ‘t’ at the end, run the stated query in the SQL command-line shell. Here we have 4 records from this query.

To get 8 records of the table, where a person’s job must have ‘er’ at the end, run the below query in the shell. Here we have got 6 records from this query.

Let’s change the WHERE clause along with the LIKE statement in the SELECT query. Suppose you want to fetch a 6-row record from the table ‘same’. You have tried a condition to fetch the only records where the ‘fname’ must have ‘a’ at the last of its value, and ‘lname’ must have ‘a’ at any middle location of its value. On the other hand, the data must be sorted following the column ‘age’ descending order. To get these 6 records, run the below-stated query in the SQL command-line shell. We have got 5 records for this condition, and the result is shown below.

I hope you are fully prepared about the LIMT topic after trying almost all the examples for the LIMIT clause along with its members, e.g., Offset and row number.