Among the most effective exploit tools is Metasploit. It is available in two varieties: commercial and free. Because there are no significant differences between the two versions, we will primarily use the Community version that is freely available for the public, in this guide. Metasploit is a penetration testing platform that simplifies the process of hacking.

For several attackers and defenders, it is a must-have tool. Metasploit works flawlessly with Nmap, SNMP scanner, and Windows patch detection, among other tools, during the data gathering portion of a pentest. The pentester has a unified foundation to work from with Metasploit, where all of the tools work in the same way and are built in the same language, trying to make things much faster and easier.

There are various password-cracking programs available, but John the Ripper has long been one of the most popular. It’s a versatile piece of software that can be set up and utilized in a variety of ways. Let’s have a look at a little-known module edition of JTR in Metasploit that may be used to swiftly break weak passwords, in the hopes of saving time and effort.

This tutorial will assist you if you want to improve your knowledge and learn the strategies and methods for hacking Wi-Fi passwords using Metasploit. Many people want to know how to hack Wi-Fi passwords with Metasploit and if it is even possible. The simple answer is that by utilizing specific tactics and tools, you could hack Wi-Fi passwords in Metasploit. Anyone inside the router’s broadcast radius can connect to a wireless network. As a result, they are prone to attacks. Public hotspots can be found in areas like airports, cafés, and parks.

Wi-Fi password security can be divided into three categories. The following are the Wi-Fi security measures:

Wired Equivalent Privacy is among the most extensively utilized Wi-Fi security protocols in the world. However, this security is quite shoddy and insecure. Airmon utilities from Kali Linux and Aircrack can break easily and exploit such Wi-Fi security.

The Wi-Fi Protected Setup is a Wi-Fi security measure that is difficult to break. It has been discovered that this Wi-Fi security can be exploited in some circumstances, however, this needs advanced hacking expertise. If WPS security is used, it may be tough to compromise this security.

Wi-Fi Protected Access is an upgraded and updated version of the WEP Wi-Fi security standard. However, an American hacker discovered a serious weakness in WPA security keys. As a result, it has become quite simple to circumvent this Wi-Fi protection. Any Wi-Fi password with WPA security can be cracked.

In this tutorial, we are utilizing Ubuntu 20.04 operating system. We have already installed the Metasploit framework in it to perform this article. You are permissible to use your preferred operating system. So start the process and open the Ubuntu terminal by searching it in the applications or pressing “Ctrl+Alt+T” altogether. Once launched, perform the following instruction to it.

The Metasploit database, connections, and Metasploit module configuration and activation are all handled by the msfconsole. Ultimately, the MSFCONSOLE will link you to a host for exploitation, allowing you to execute exploits against it. Run the following affixed command in the terminal to get started with Metasploit in Ubuntu 20.04 Linux operating system. 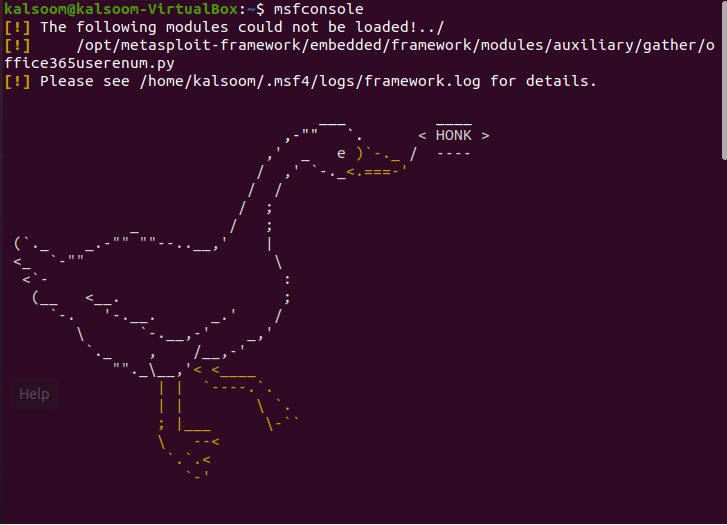 The output will be almost similar to the one that is displayed in the above image. Psnuffle is a Metasploit password sniffing component that works similarly to the utility dsniff in sniffing passwords off from the wire. POP3, IMAP, FTP, and HTTP GET are currently supported. Now, run the following affixed command in the terminal of the Ubuntu 20.04 Linux operating system.

Now, the following command will be executed to show the options available: 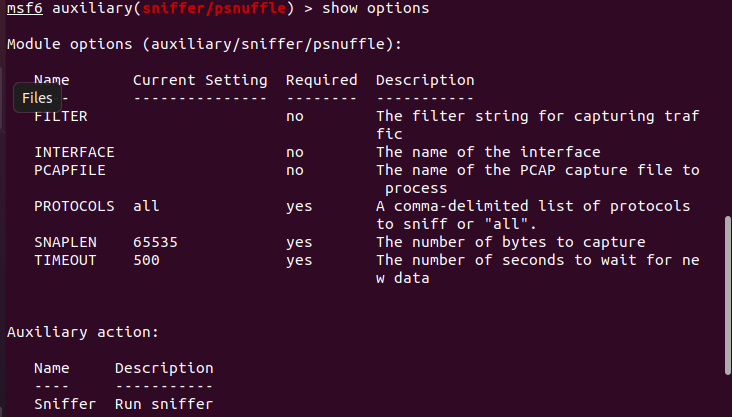 The capability to import a pcap capture file is one of the options accessible. We will use the default settings for the psnuffle scanner.

In this guide, the concept of hacking along with Metasploit has been explained briefly. Also, different categories of Wi-Fi security measures are also explained so that users can easily understand the basic concept. Along with that, the method to hack Wi-Fi passwords in Metasploit using Ubuntu 20.04 operating system has been explained thoroughly.