In Linux-like systems, a user can do anything like communicating with the system or opening up files using the terminal. Everything in the Linux system is represented as a file or directory.

There is also a command called “stty” on UNIX-like operating systems, an abbreviated form of “Set Teletype”. This command manages terminal settings and allows a user to make changes on the terminal and display terminal line characteristics.

The syntax of the “stty” command is:

How to Use stty Command?

Execute the “stty” command without passing any argument to display the characteristics of terminal:

How to Use “stty” Command Options?

Run the options of “stty” command in the following way to get the required output:

Execute the given command to display the current settings of a terminal in a human-readable format:

Run the “-g” or “–save” option in the command-line to get the output in the stty-readable format:

Use the “-F” option in a terminal and pass the device file as an argument:

Get the details of the “stty” command and its options using the “–help” option: 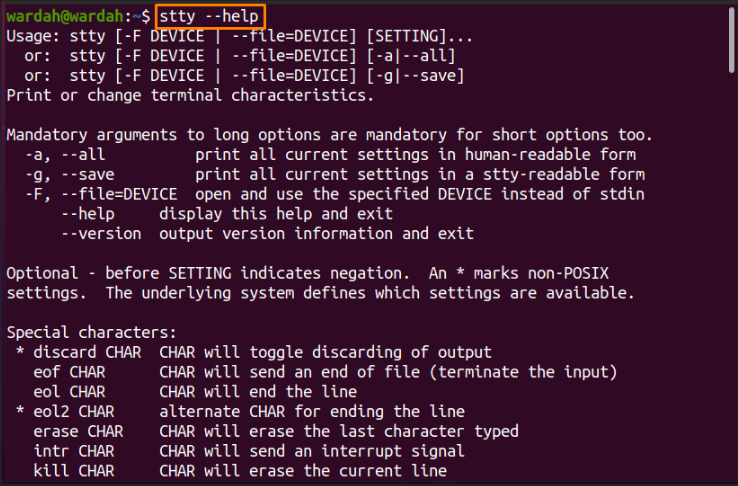 Get the current version of the “stty” command using the following command:

The “stty” command is used to make changes and display the characteristics of the terminal. In this article, we have seen a guide of “stty” command and its options.