The kernel in Linux acts as a bridge to enable communication between software/applications and your machine’s hardware. It acts as the backbone of your operating system upon which the normal processing of all your system functions is based. That is why it is always good to keep it updated and upgraded regularly. In today’s article, we will be exploring the procedure of upgrading our Linux kernel version on Debian 10.

Method of Upgrading your Linux Kernel Version on Debian 10:

For upgrading your Linux kernel version in Debian 10, you have to perform the following four steps:

First, you should check the current version of the kernel installed on your Debian 10 system to verify if it has been upgraded or not later on. For checking the current kernel version in Debian 10, you will have to execute the command stated below:

The currently installed kernel version on our Debian 10 system is Linux 4.19.0-9-amd64, as shown in the following image:

When all the necessary packages on your Debian 10 system is updated, this command will finish its execution as shown in the following image:

Now we can finally attempt to upgrade our Linux kernel version in Debian 10 with the help of the command shown below:

We have used the “dist” parameter with the “upgrade” command to smartly manage the up-gradation process by installing the required packages and removing the irrelevant ones at the same time.

During the execution of this command, you will be asked to confirm this action because doing so will occupy some additional space on your system. You can confirm the up-gradation process by pressing the “Y” key and then hitting the Enter key as shown in the following image: 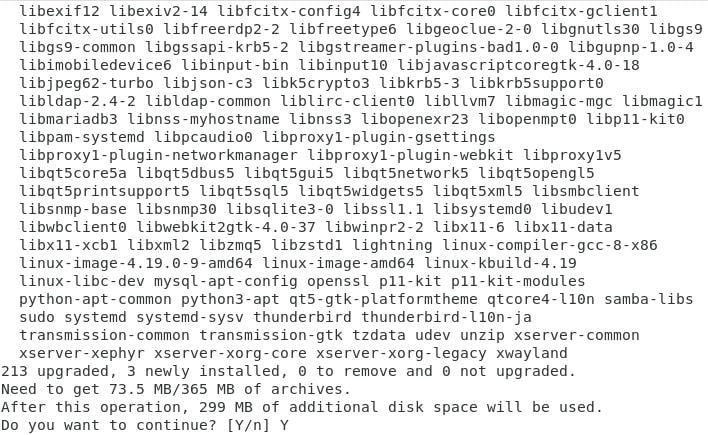 When the up-gradation process finishes, the Linux kernel version on your Debian 10 system will also have been upgraded.

By going through the procedure described in this article, you can conveniently upgrade your Linux kernel version in Debian 10 at any time you want. It is highly recommended that you keep repeating this process after regular intervals for your Debian 10 system’s proper functioning.