Developers often encounter a situation where they do not want to commit all created and modified project files and temporarily ignore them from the staging area. Moreover, they want to keep these changes without updating the repository. In this situation, it is required to temporarily untrack these files. More specifically, the “$ git rm –cached” and “$ git update-index” commands can be helpful for this corresponding purpose.

Now, move toward the detail of the above-listed methods!

The “$ git rm –cached” command can temporarily remove the specified file from the staging area and untrack it. To implement this operation for better understanding, follow the steps below.

First, navigate to the particular Git repository by executing the “cd” command:

To make a new text file in the repository, use the “touch” command:

Next, run the below-provided command to add the text file to the staging area:

Now, delete the file from the staging area by executing the “git rm” command along with the “–cached” option and particular file name:

Run the “git status .” command to check the repository status:

As you can see, the specified file has been temporarily removed the file from the staging index: 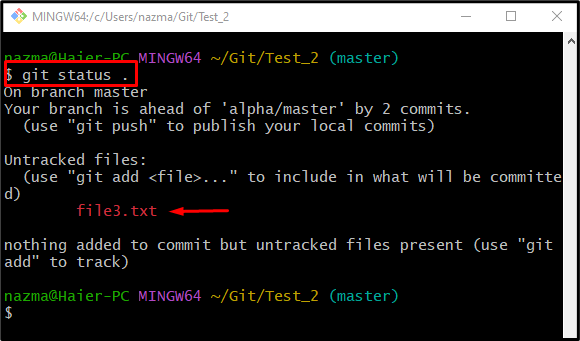 Let’s move to the next method to untrack the files from Git temporarily.

Sometimes developers do not want to track all created files in the staging area and want to ignore them temporarily. To do so, follow the below-listed steps.

To start ignoring the desired text file with changes, execute the provided command along with desired file path:

Here, the “–assume-unchanged” option will suppose the file is not changed and ignore the modifications:

Now, to ensure the specified file is ignored successfully, run the “git ls-files” command with the “-v” option:

Here, the “h” indicates that the file is untracked temporarily from the repository and “H” shows the file is tracked:

Next, switch back to the Git root directory using the “cd ..” command:

After performing desired operations on the Git repository, track back the ignore file, and run the following command along with the “–no-assume-unchanged” option:

Next, navigate to the Git local repository through the provided command:

As you can see, the below-highlighted file status is “H”, which indicates that the file is tracked successfully:

That’s it! We have provided different ways to untrack files from the Git repository temporarily.