Let’s take a new illustration to see the working of the “unlink()” system call in Linux. Let’s create a text file first in the current directory using “touch” instruction, add some data in it, and display the data as well as follows:

After creating a file, we have listed the contents of a home directory as stated below. Now, the list contains the new.txt file as well.

Let’s open the “unlink.c” C file to add up some C language code in it to Unlink the file “new.txt”. 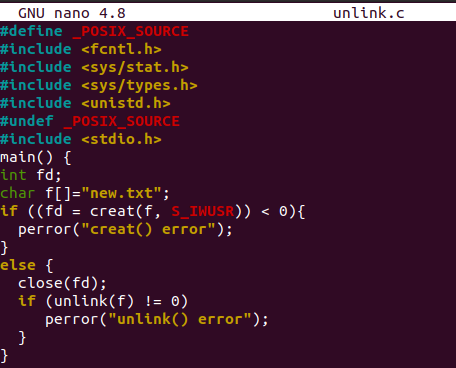 Now, compile the file “unlink.c” that has just been updated. The compilation of a file got no errors indicates the code is all fine.

After compilation, the file needs to be executed in the shell as follows:

Let’s see the contents of a Linux home directory once again using the “ls” command. The output shows that the file “new.txt” has been fully unlinked from the file system of Linux.

Another way to use unlink in the C code has been shown in the image below. Open the “link.c” file and assign the file name as an argument to the system called “unlink”. The link value would be returned and saved into the variable “n”. The first print statement shows that 0 links returned indicates success, and -1 returned means failure. The second print statement will print the link value returned and shows that the “unlink” of a file has been successful. 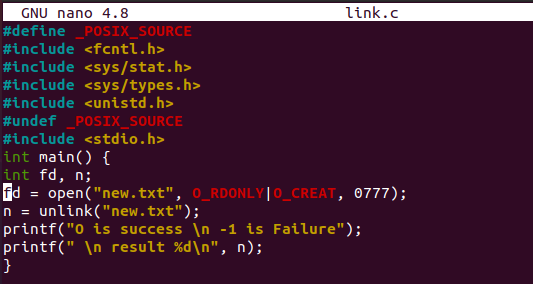 Upon compilation and execution of a file, we have got the success message that the file has been fully unlinked as 0 indicated success.

Lastly, we will see a simple example to use the unlink() system call on some files within the shell. List out the file and folders residing in the current home directory of our Ubuntu 20.04 Linux system using the command “ls”. We have three files in the directory. Let’s unlink the file “umask.c” from the current directory using the “unlink” system call in the shell as stated below.

This article has demonstrated the working of an Unlink system call in C language within the Ubuntu 20.04 system. We hope all the examples will be easy to implement on your system using terminal and C files.