Designing computers is always a compromise. The four basic components of a computer – the central processing unit (CPU) or processor, the memory, the storage, and the board for connecting the components (I/O bus system) — are combined as cleverly as possible to create a machine that is both cost-effective and powerful. The design process mostly involves an optimization towards processors (co-processors, multi-core setup), memory type and amount, storage (disks, file system), as well as price.The idea behind co-processors and multi-core architecture is to distribute operations to as many single computing units in the smallest space possible and to make parallel execution of computing instructions more available and affordable. In terms of memory, it is a question of the amount or size that can be addressed by the individual computing unit, and which memory type works with the lowest latency possible. Storage belongs to the external memory, and its performance depends on the disk type, the file system that is in use, threading, transfer protocol, communication fabric, and the number of attached memory devices.

The design of I/O buses represents the computer arteries and significantly determines how much and how quickly data can be exchanged between the single components listed above. The top category is led by components used in the field of High Performance Computing (HPC). As of mid-2020, among the contemporary representatives of HPC are Nvidia Tesla and DGX, Radeon Instinct, and Intel Xeon Phi GPU-based accelerator products (see [1,2] for product comparisons).

Non-Uniform Memory Access (NUMA) describes a shared memory architecture used in contemporary multiprocessing systems. NUMA is a computing system composed of several single nodes in such a way that the aggregate memory is shared between all nodes: “each CPU is assigned its own local memory and can access memory from other CPUs in the system” [12,7].

NUMA is a clever system used for connecting multiple central processing units (CPU) to any amount of computer memory available on the computer. The single NUMA nodes are connected over a scalable network (I/O bus) such that a CPU can systematically access memory associated with other NUMA nodes.

However, it takes longer than when that CPU is accessing its own local memory. Local memory access is a major advantage, as it combines low latency with high bandwidth. In contrast, accessing memory belonging to any other CPU has higher latency and lower bandwidth performance.

Looking Back: Evolution of Shared-Memory Multiprocessors

Frank Dennemann [8] states that modern system architectures do not allow truly Uniform Memory Access (UMA), even though these systems are specifically designed for that purpose. Simply speaking, the idea of parallel computing was to have a group of processors that cooperate to compute a given task, thereby speeding up an otherwise classical sequential computation.

As explained by Frank Dennemann [8], in the early 1970s, “the need for systems that could service multiple concurrent user operations and excessive data generation became mainstream” with the introduction of relational database systems. “Despite the impressive rate of uniprocessor performance, multiprocessor systems were better equipped to handle this workload. To provide a cost-effective system, shared memory address space became the focus of research. Early on, systems using a crossbar switch were advocated, however with this design complexity scaled along with the increase of processors, which made the bus-based system more attractive. Processors in a bus system [can] access the entire memory space by sending requests on the bus, a very cost-effective way to use the available memory as optimally as possible.”

Most CPUs were constructed in a two-dimensional plane. CPUs also had to have integrated memory controllers added. The simple solution of having four memory buses (top, bottom, left, right) to each CPU core allowed full available bandwidth, but that goes only so far. CPUs stagnated with four cores for a considerable time. Adding traces above and below allowed direct buses across to the diagonally opposed CPUs as chips became 3D. Placing a four-cored CPU on a card, which then connected to a bus, was the next logical step.

Today, each processor contains many cores with a shared on-chip cache and an off-chip memory and has variable memory access costs across different parts of the memory within a server.

Improving the efficiency of data access is one of the main goals of contemporary CPU design. Each CPU core was endowed with a small level one cache (32 KB) and a larger (256 KB) level 2 cache. The various cores would later share a level 3 cache of several MB, the size of which has grown considerably over time.

To avoid cache misses — requesting data that is not in the cache — a lot of research time is spent on finding the right number of CPU caches, caching structures, and corresponding algorithms. See [8] for a more detailed explanation of the protocol for caching snoop [4] and cache coherency [3,5], as well as the design ideas behind NUMA.

There are two software optimization measures that may improve the performance of a system supporting NUMA architecture — processor affinity and data placement. As explained in [19], “processor affinity […] enables the binding and unbinding of a process or a thread to a single CPU, or a range of CPUs so that the process or thread will execute only on the designated CPU or CPUs rather than any CPU.” The term “data placement” refers to software modifications in which code and data are kept as close as possible in memory.

The different UNIX and UNIX-related operating systems support NUMA in the following ways (the list below is taken from [14]):

In the book “Computer Science and Technology, Proceedings of the International Conference (CST2016)” Ning Cai suggests that the study of NUMA architecture was mainly focused on the high-end computing environment and proposed NUMA-aware Radix Partitioning (NaRP), which optimizes the performance of shared caches in NUMA nodes to accelerate business intelligence applications. As such, NUMA represents a middle ground between shared memory (SMP) systems with a few processors [6].

As stated above, the Linux kernel has supported NUMA since version 2.5. Both Debian GNU/Linux and Ubuntu offer NUMA support for process optimization with the two software packages numactl [16] and numad [17]. With the help of the numactl command, you can list the inventory of available NUMA nodes in your system [18]:

NumaTop is a useful tool developed by Intel for monitoring runtime memory locality and analyzing processes in NUMA systems [10,11]. The tool can identify potential NUMA-related performance bottlenecks and hence help to re-balance memory/CPU allocations to maximise the potential of a NUMA system. See [9] for a more detailed description. 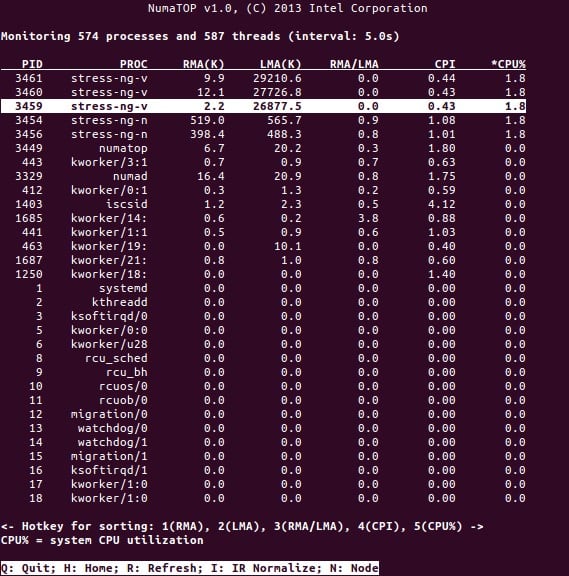 Computers that support NUMA technology allow all CPUs to access the entire memory directly — the CPUs see this as a single, linear address space. This leads to more efficient use of the 64-bit addressing scheme, resulting in faster movement of data, less replication of data, and easier programming.

NUMA systems are quite attractive for server-side applications, such as data mining and decision support systems. Furthermore, writing applications for gaming and high-performance software becomes much easier with this architecture.

In conclusion, NUMA architecture addresses scalability, which is one of its main benefits. In a NUMA CPU, one node will have a higher bandwidth or lower latency to access the memory on that same node (e.g., the local CPU requests memory access at the same time as the remote access; the priority is on the local CPU). This will dramatically improve memory throughput if the data are localized to specific processes (and thus processors). The disadvantages are the higher costs of moving data from one processor to another. As long as this case does not happen too often, a NUMA system will outperform systems with a more traditional architecture.

The authors would like to thank Gerold Rupprecht for his support while preparing this article.

Plaxedes Nehanda is a multiskilled, self-driven versatile person who wears many hats, among them, an events planner, a virtual assistant, a transcriber, as well as an avid researcher, based in Johannesburg, South Africa.

Prince K. Nehanda is an Instrumentation and Control (Metrology) Engineer at Paeflow Metering in Harare, Zimbabwe.

Frank Hofmann works on the road – preferably from Berlin (Germany), Geneva (Switzerland), and Cape Town (South Africa) – as a developer, trainer, and author for magazines like Linux-User and Linux Magazine. He is also the co-author of the Debian package management book (http://www.dpmb.org).