The computers normally work by understating the numbers and to translate the numbers into characters a standard is created. This standard has given a specific set digit to each character whether it’s an alphabet or any symbol and the standard is called ASCII standard. Using the ASCII for each character has made communication easy between machines and humans.

The ASCII is the acronym of the “American Standard Code for Information Interchange” and from the name it can be assumed that it is the code used for interchanging the information from machine to humans or machine to machine.

What is character encoding

Character encoding is done so that computers can interpret and process the characters. For example, we can suppose some numbers and assign them to the alphabets. There are 26 alphabets and let’s assign a number from 1 to 26 to all the uppercase alphabets, that means we have encoded the characters/alphabets by assigning them a number.

In the above table letter L, I, N, U, and X are given 12, 9, 14, 21 and 24 numbers respectively. Now, it will be easier for computers to decipher and print the characters. But to encircle the entire English language characters the American Standard Association (NSA) released the first version of ASCII in 1963. ASCII was one of the first standards created for computer information exchange.

Why is ASCII important

Well, it is important because it is a connection between our computer and memory and now it is a standard for every computer. The information stored on memory is in 0s and 1s, and ASCII helps to translate that information into characters or human readable format.

ASCII codes are used in telecommunication devices, computers and other related equipment.

To find the ASCII value of any character you need to refer to the standard ASCII table as shown below: 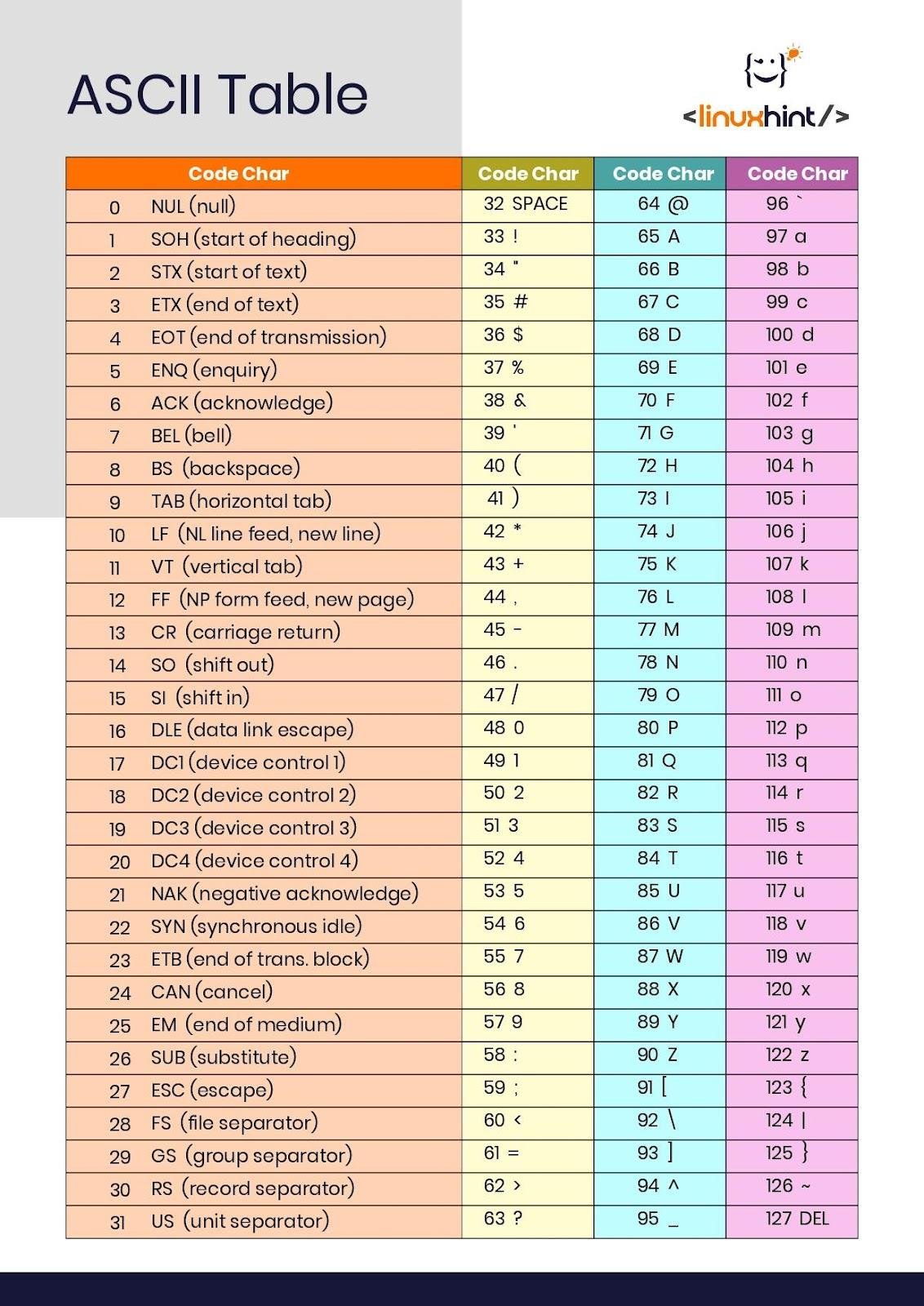 Let’s take an example of a word “Linux”, that how it is stored on memory:

There are 128 characters and each character is assigned an ASCII number. Let’s dissect the table into two categories to further understand it:

Some of the control characters are associated with keyboard keys. For example, the backspace key; when you press the key the effect can be visualized on screen but it does not print any character.

Similarly, to communicate the computer for ending of any text or starting of the text the ASCIIs for the respective characters are used. These control characters tell the computer how to run the code and print the output.

A chart of all control characters is: 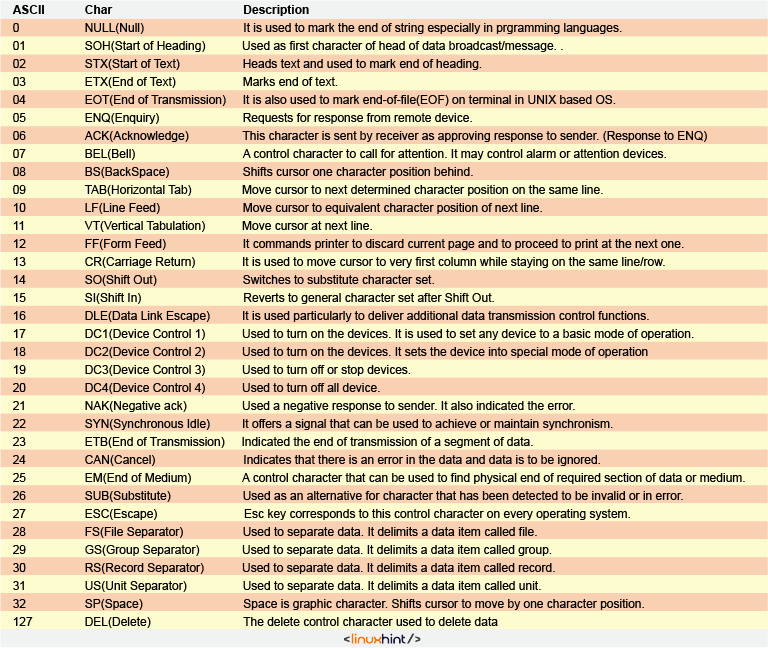 The numbers and symbols include all the numerical values 0-9 and symbols such as addition, subtraction operators while the Alphabets category includes all the English alphabets with upper and lower case. 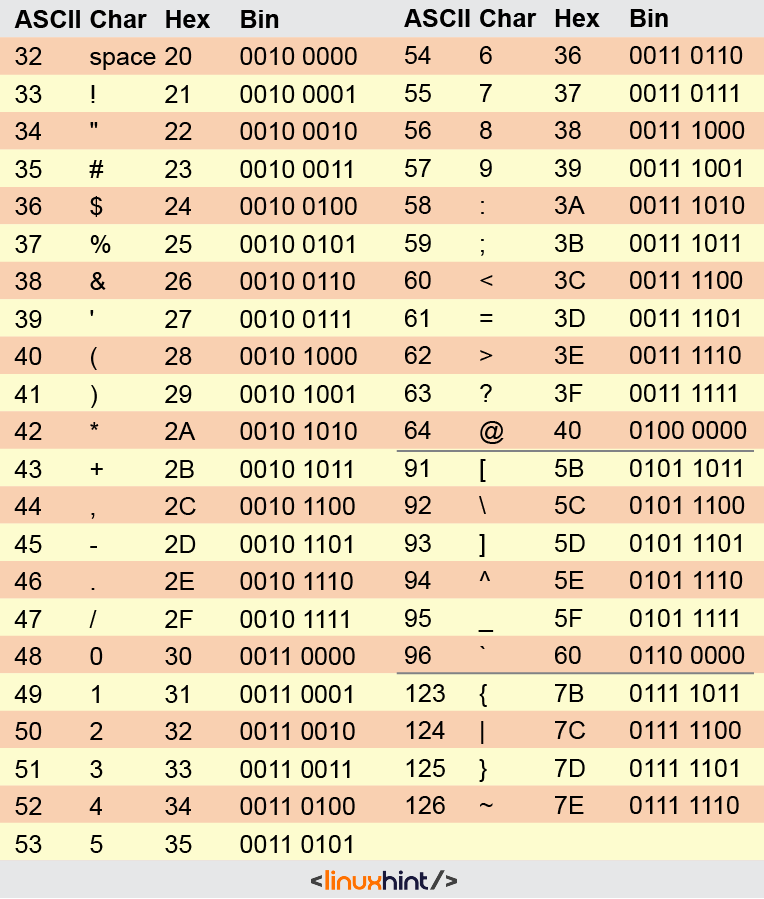 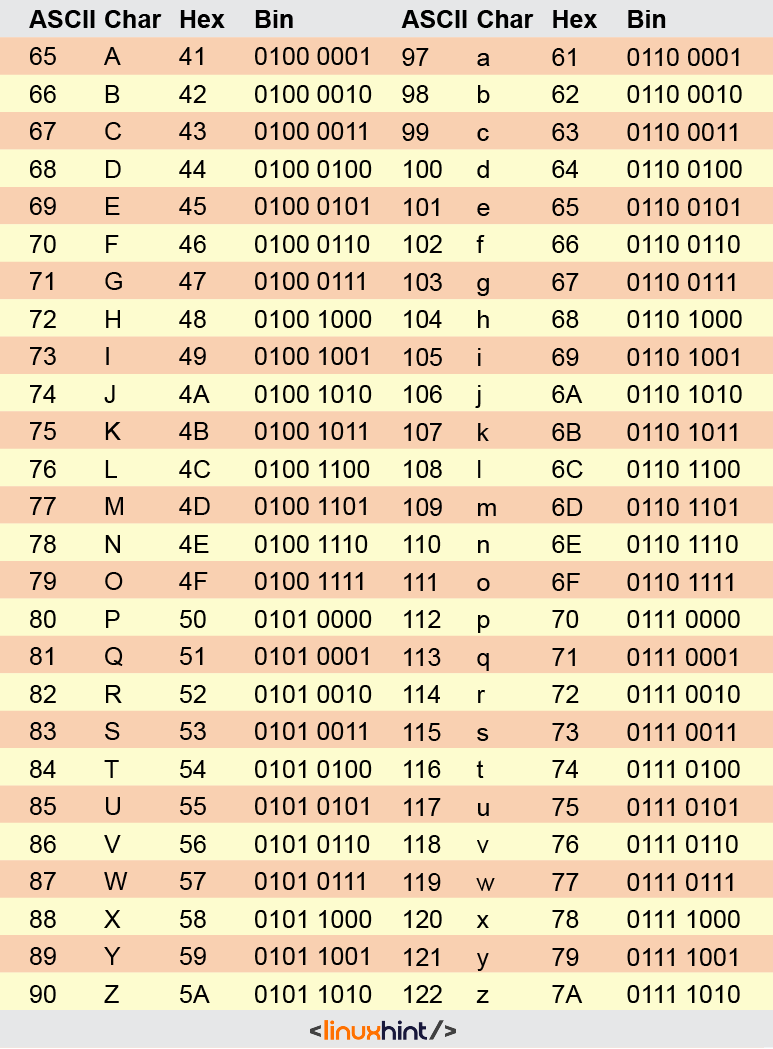 Computers can only save the data in numbers because they only understand the number language. So, in order to make computers understand the characters, each character has to be a specific number. The characters not only include the alphabets but they also include the different symbols that can be used in programming. In this write-up the standard ASCII table is discussed to give a better concept that how it can be understood and how it is useful for the communication between the different devices and computers.