In this article, I am going to talk about problems you may have with your boot partition getting full and how you remedy boot partition full errors on Ubuntu. Let’s get started.

Importance of the Boot Partition:

On Ubuntu and other modern Linux distributions, all the files required to boot your computer is kept on different partition, called the Boot partition. The Boot partition is usually about 512MB or 256MB in size.

From all this, you can tell how important the Boot Partition is and it’s crucial for a fully functioning Linux system.

As I stated earlier, the boot partition is a small partition of about 256MB or 512MB. Usually nobody makes it larger than that. So when you install a new version of kernel, it is placed in the /boot directory (this is where the boot partition is mounted) and the GRUB configuration file /boot/grub2/grub.cfg is updated. Installing a new kernel does not remove the old one automatically. So additional free space must be available for the new kernel files and for the updated GRUB configuration files.

You can run the following command to check the available free space on the boot partition (/boot):

As you can see, the boot partition of one of my Ubuntu virtual machine is about 472MB in size, and only 56MB is used. The available free space is about 393MB.

As you can see, everything was installed on a single partition in this Ubuntu virtual machine.

The advantage of doing so is that, you will not run into the boot partition full error as long as you have enough free space in your root partition (/). If you do happen to run into one, you can just delete some of your user files (from your login users $HOME directory) and it should be fixed easily.

Even though this way you can avoid boot partition full errors all together, I don’t recommend it. You should always have a separate boot partition.

If you have everything installed on a single partition, then freeing up disk space is not a big issue. You can delete some of your user’s files from the HOME directory, or move them into a USB drive or an external hard drive.

On Ubuntu, the APT package repository caches and other temporary files can be removed to free up disk space.

First, you have to check what kernel you’re currently using with the following command:

As you can see, the version of kernel currently being used is 4.15.0-34-generic.

Now run the following command to list all the installed kernel packages:

If you list the files in the /boot directory, you should see abi, config, initrd.img, retpoline, System.map, vmlinuz files for different versions of the kernel.

For example, you can remove the old kernel package, let’s say linux-image-4.15.0-20-generic with the APT package manager as follows: 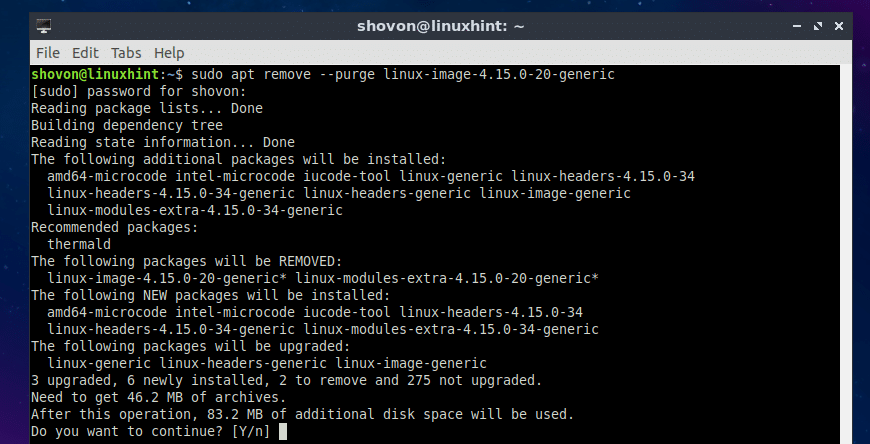 The linux-image-4.15.0-20-generic package should be removed.

Now run the following command to clean up the dependencies of the old kernel package:

The old kernel dependency packages should be removed.

As you can see, the old kernel files are no longer available in the /boot directory.

If you have free space on your hard drive that you’re not using, then you can solve boot partition full problem by resizing the boot partition. You can use gparted graphical application to do that easily.

That’s how you remedy boot partition full errors on Ubuntu. Thanks for reading this article.