WiFi is a wireless networking mechanism that connects devices to the internet, including smartphones, video cameras, printers, wearables, laptops, and desktops. It also permits these devices to connect with each other, which creates a network. On your Xfce Manjaro system, if you are having trouble connecting to your WiFi network, then you are at the right post! This write-up will guide you about turning on WiFi on Xfce Manjaro using its terminal and the GUI. So, let’s start!

How to turn on WiFi on Xfce Manjaro using terminal

On your Xfce Manjaro system, if you want to turn on WiFi through the command line method, then, firstly, press “CTRL+ALT+T” to open up the terminal. After doing so, we will utilize the “ip” command with the option “a” to check out the name of our WiFi adapter and its related information:

From the below-given output, you see that our “WiFi” adapter named “wlp3s0” is in “down” state, which declares that “wlp3s0” is turned off”: 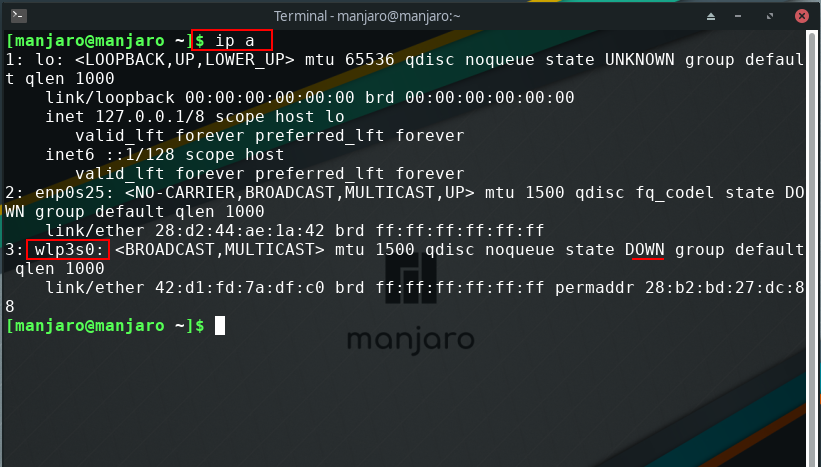 The “ifconfig” is a tool utilized for configuring the network interfaces in Linux-based systems including Manjaro. With the help of “ifconfig”, you can also turn on your WiFi by following the syntax:

For instance, “wlp3s0” is the name of our WiFi connection which we will specify in the below-given command:

The error-free output signifies that the WiFi connection named “wlp3s0” is now turned on on our Manjaro system. To confirm this operation, look for the “Network icon” which is located on the panel:

To turn it off, specify the option “down” instead of “up” in the same “ifconfig” command:

Now, you can see that WiFi is turned off on our Xfce Manjaro:

How to turn on WiFi on Xfce Manjaro using GUI

Most of the Manjaro users prefer to utilize its graphical user interface for configuring the network settings. On Manjaro, turning on WiFi by using its GUI comprises a simple procedure. In the first step, look for the “Network icon” in your system panel and right-click on it:

You will see a pop-up menu, which will have the “Enable WiFi” unchecked box in case if WiFi is turned off on your system: 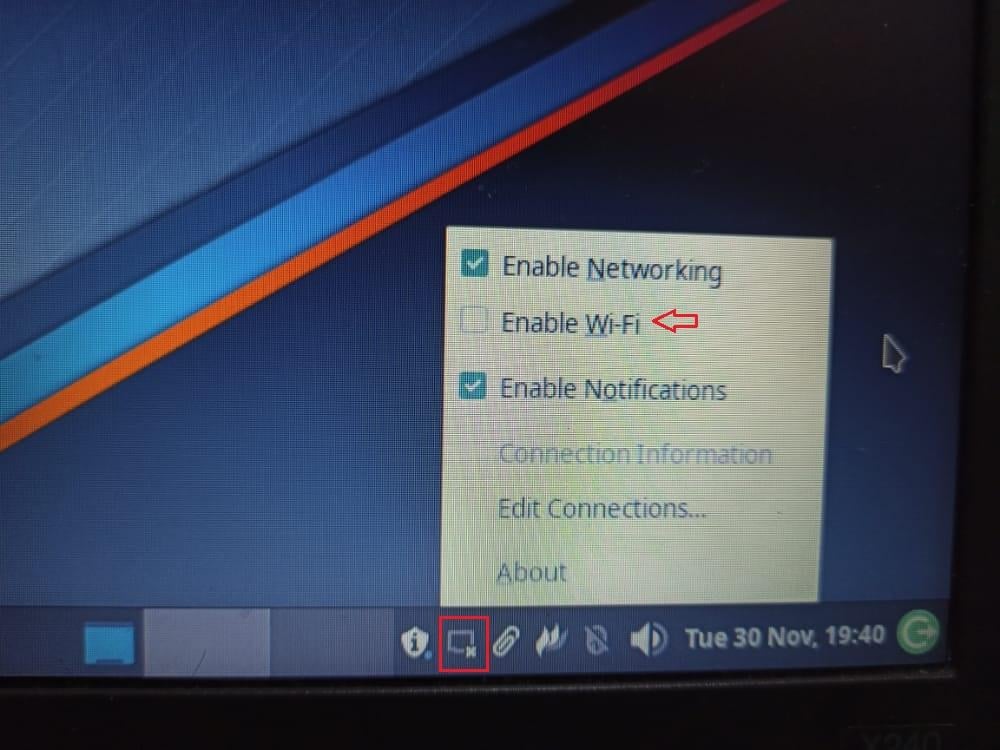 Now, mark the “Enable WiFi” checkbox to establish a WiFi connection with a wireless router: 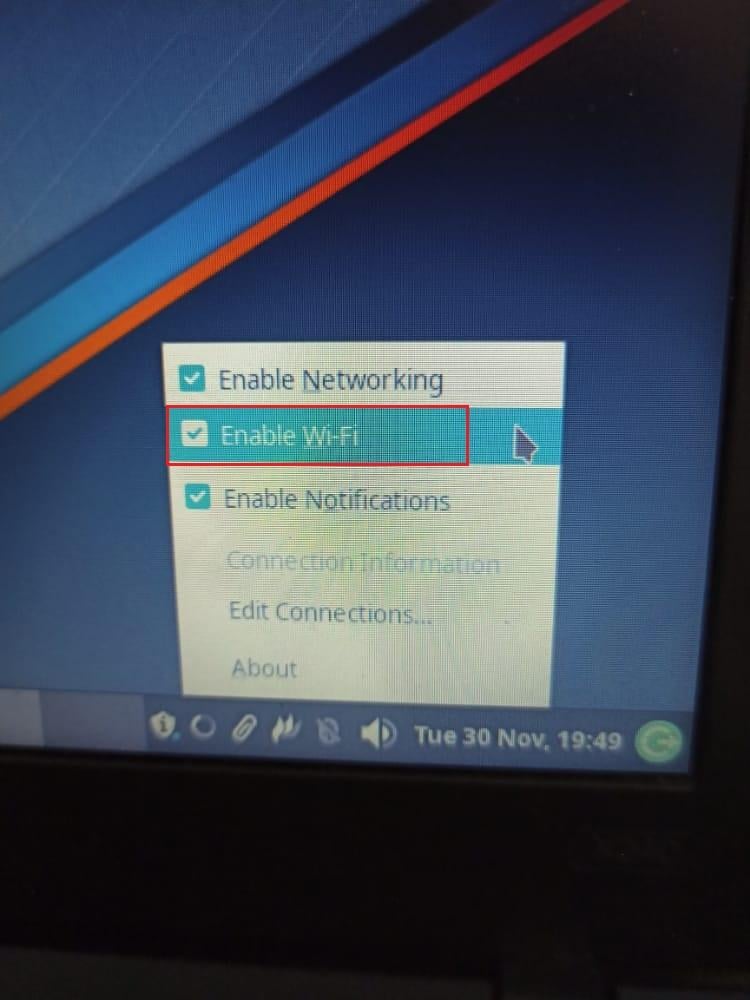 After enabling the WiFi, single click on the “Network Icon” and select the WiFi device with which you want to build a connection: 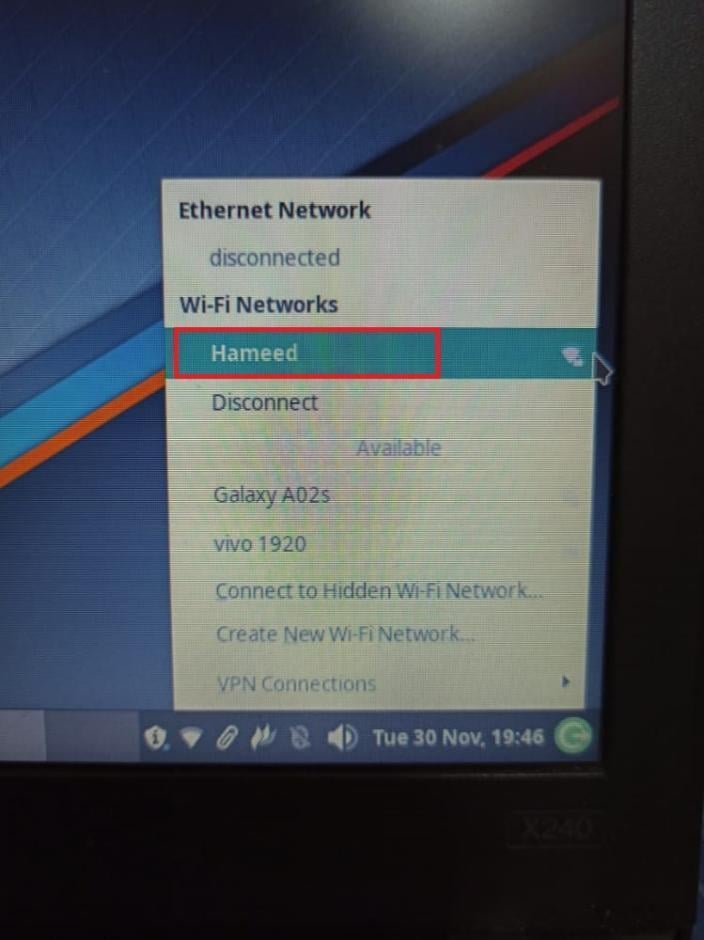 To know the details about the enabled WiFi connection, right-click on the highlighted icon, and from its pop-up menu, select the “Connection Information” option: 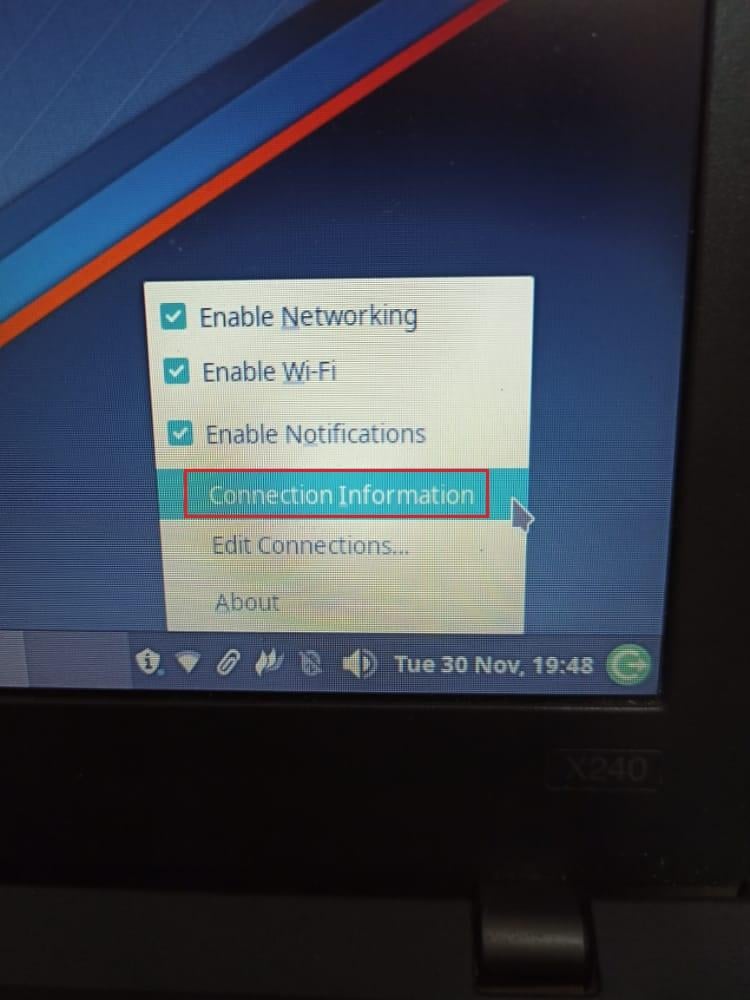 By performing the specified action, a “Connection Information” window will appear on your Manjaro desktop, showing you all the details related to the WiFi connection, such as its interface, hardware, speed, IP Address, Subnet Mask, Default Route, and Primary DNS: 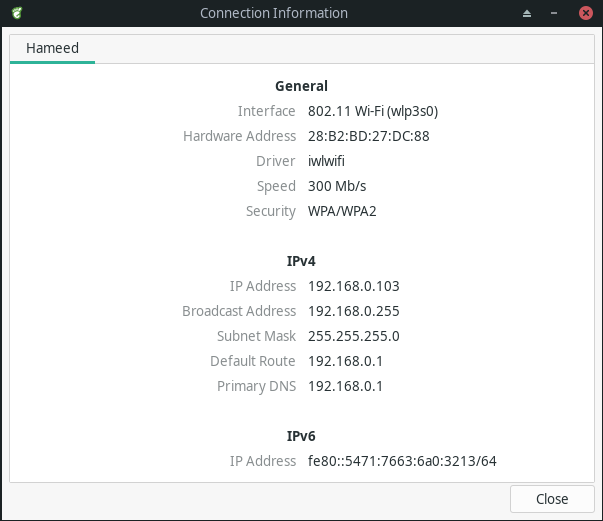 WiFi is essentially an internet connection shared by a wireless router with several devices in a home or organization. Manjaro distribution has built-in support for the WiFi interfaces. However, if you are new to the Xfce Manjaro, you may find it difficult to turn on WiFi on your desktop. This write-up showed you how to turn on WiFi on Xfce Manjaro using its terminal and Graphical User interface methods. Try any of them and establish a WiFi connection with your device within a few minutes.