A tree in software is like a biological tree, but with the following differences:

The branches of the software tree are represented by straight lines. A good example of a software tree you might have used is the directory tree of the hard disk of your computer.

The hyperlink to download the code is given at the bottom of this article.

To understand the code samples in this article, you need to have basic knowledge in JavaScript (ECMAScript). If you do not have that knowledge, then you can get it from http://www.broad-network.com/ChrysanthusForcha-1/ECMAScript-2015-Course.htm 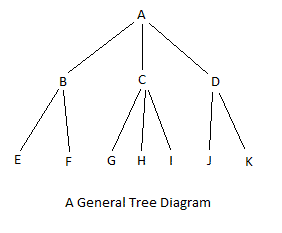 ‘A’ is the root node; it is the first-level node. B, C, D are on the second line; these are second-level nodes. E, F, G, H, I, J, K are on the third line, and they are third-level nodes. A fourth line would have produced fourth level nodes, and so on.

– All branches for all the levels of nodes, have one source, which is the root node.

– A tree has N – 1 branches, where N is the total number of nodes. The above diagram for the general tree has 11 nodes and 10 branches.

– Unlike with humans, where every child has two parents, with the software tree, every child has only one parent. The root node is the greatest ancestor parent. A parent can have more than one child. Every node, except the root node, is a child.

Traversing All Nodes of A Tree

All the nodes of a tree can be accessed to read or change any value of the node. However, this is not done arbitrarily. There are three ways of doing this, all of which involves Depth-First Traversal as follows:

Assuming that there are two siblings per node; then left->root->right means, you access the lowest and leftmost node first, then the parent of the node, and then the right sibling. When there are more than two siblings, take the first as the left and the rest of the right nodes, as the right. For the general tree above, the bottom left subtree is accessed to have, [EBF]. This is a subtree. The parent of this subtree is A; so, A is next accessed to have [EBF]A. Next, the subtree [GCHI] is accessed to have a bigger subtree, [[EBF]A[GCHI]]. You can see the left->root->right profile portraying itself. This big left subtree will have the subtree, [JDK] to its right to complete the traversing to obtain, [[EBF]A[GCHI]] [JDK].

Assuming that there are two siblings per node; then root->left->right means, you access the root first, then the left immediate child, and then the right immediate child. When there are more than two siblings, take the first as the left and the rest of the right nodes, as the right. The leftmost child of the left child is the next to be accessed. For the general tree above, the root subtree is [ABCD]. To the left of this subtree, you have the subtree, [EF], giving the access sequence, [ABCD][EF]. To the right of this bigger subtree, you have two subtrees, [GHI] and [JK], giving the complete sequence, [ABCD][EF][GHI][JK]. You can see the root->left->right profile portraying itself.

The above tree will be created using ECMAScript, which is like the latest version of JavaScript. Each node is an array. The first element of each node array is the parent of the node, another array. The rest of the elements of the node are the children of the node, beginning from the leftmost child. There is an ECMAScript map that relates each array to its corresponding string (letter). The first code segment is:

Also, note that above the root node A, there is another node O (not zero). The first element of this array (node) is undefined, meaning its own parent is undefined. The extra node O has been added to make the traversing code easy.

There is also a map. The map relates each array of one-letter names, to the corresponding string name of one letter.

There is one program for each of the three traversing techniques.

There are two recursive functions for this program, where each calls the other. The main one is called fn(node). The program (code) is short. Download the combined file below for the detail coding.

Here, there is only one recursive function. It is called, fn(node). Here, the [ABCD], [EF], [GHI] and [JK] subtrees are developed to give the complete sequence, [ABCD][EF][GHI][JK]. The program for this is also short.

There are two recursive functions for this program, where each calls the other. The main one is called fn(node). The program for this is also short. Download the combined file below for the detailed coding.

There are software trees, which describe layouts, such as the directory tree in the hard disk of a computer. Many trees do not describe existing layouts at all. In fact, they describe algorithms. For example, the mathematical algorithm (x+y) x (x-y) is described by a tree where x is the root node, then + and – are immediate child nodes of the root. x and y are children nodes of +. x and y are again children nodes of -. Such a tree is known as an expression tree.

Many different types of trees can be categorized into different headings; such as Binary Tree, B-Tree, Expression Tree, etc. All of them are derived from the general tree.

Some of the tree categories are divided into further categories. The binary tree for example, has at least the Binary Search Tree, the AVL Tree, and the Cartesian Tree.

A software tree is like a normal tree in the park or the forest. However, the computer programming tree is upside-down. There are different types of trees. Other trees are derived by introducing constraints into the general tree. All the nodes of a tree can be accessed using an in-order, pre-order, or post-order algorithm. A software tree can be produced by any computer language. ECMAScript has been chosen here because it is the simplest computer language. The next type of tree you should study is the Binary Tree since it is the most popular tree data structure.