1. Why are good outputs so important in bash scripts?

There are many, many times when you, as a system administrator, need to write bash scripts able to provide clear and easy-to-read outputs. Interactive scripts are on the other side of this same coin; to prompt appropriate messages in a systematic and eye-catching manner can avoid incorrect inputs and give further directions of what the program is requesting.

Imagine a script that requires multiple data as input. While the user enters different information, the shell needs to execute exhaustive and time-consuming calculations. Unless the program prints out messages alerting of what it is doing, or the estimated duration of the execution, many operators tend to terminate the application.

Unfortunately, you cannot count on advanced publishing application, like Adobe InDesign, to complete this task on terminals. Despite the graphics limitation in terminal emulators, more traditional text processing utilities and filters are good choices to start. There are also few techniques that can make your bash script outputs look better without risking performance or making a mess in your code.

In this article, you find an easy approach to create awesome outputs in shell scripts using only tput, printf and shell expansions. This technique also helps you to speed up the coding process to create alerts and comments without the need of reusing tput or escape characters again and again.

Here is an example of table that uses this technique: 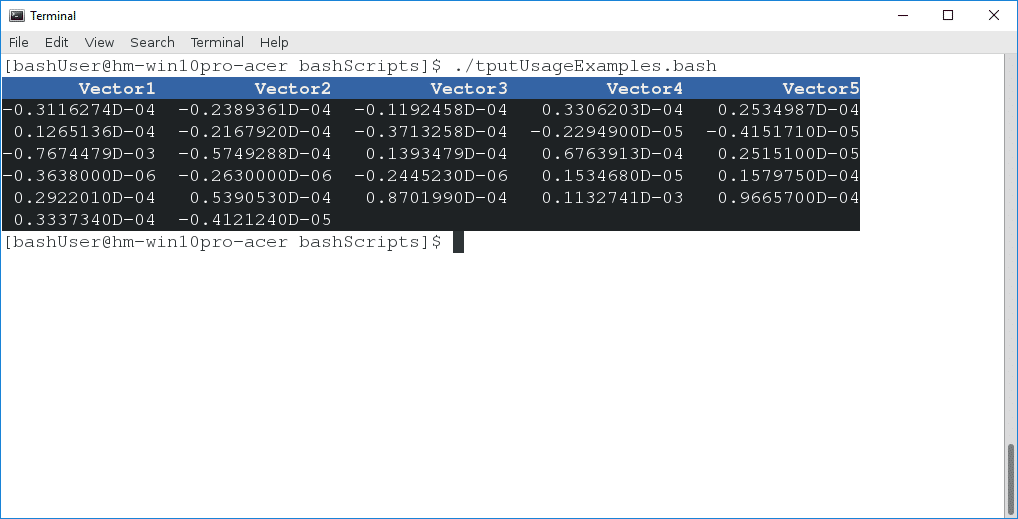 The shell executes the expansions before the command is processed. The expansion is divided into tokens and then the command line uses those indicators. Being more specific, the brace expansions generates a series of three tokens in the last command; subsequently, the shell concatenates those elements with the parameter of the command to execute. The order is as follows:

To detail every aspect of the bash expansions is out of the scope of this article; however, the official Bash documentation can help beginners to understand peculiarities found in shell expansions. There two expansions, though, that are important to understand the technique used in this article: parameter expansion and command substitution.

In essence, parameters expansions substitute a variable for its contents. This mechanism is handy to perform different shell substitutions and expansions, including selections and substring expansions with indexed arrays.

Here is the essential syntax for parameter substitution:

Sometimes, braces are optional, but the dollar sign ($) is always required to perform parameters, arithmetic expansions and command substitutions. As a good practice, it is recommended to enclose the variable with braces and isolate the expansion with double quotes.

One important thing that is possible to do with parameter expansions is to set a command as variable and then use it later without typing the full command again and again.

The command substitution occurs in a subshell environment. The standard output of the command – without the newline character at the end of the output – replaces the command in the command line. If you are a beginner and you are having an “inception moment”, that is all right.

There are two ways to perform command substitutions:

For consistency reasons, the first one is preferred over the old-school backquotes style.

In the last example, the tput command underlines the entire output. tput, the portable terminal control, can change and control terminal characteristics, like make text bold, clear the screen, brighten output up, return the number of columns, save and restore cursor position, etc. Many utilities and shell scripts provided by GNU distributions use tput to create visual effects or formatted outputs.

In other words, tput was specially designed to be used in shell scripts. To avoid repetitions in argument strings, it is a good idea to combine shell mechanisms, like parameters expansions and command substitutions, with tput capabilities.

You can use the following list in your next script.

It is just a brief set of the tput capabilities to help you to create your own scripts using these snippets. You can even create terminal games using tput capabilities. The GNU documentation for tput lists the full capabilities of the program. In the last session, this article gives examples of use in bash functions.

Note: be aware that, depending on the theme, color schemes or typeface used, your terminal emulator can output a completely different color; in general, the default configurations of each terminal are the best place to test scripts. Terminals on the WSL are also bad places to make tests with tput; some of the terminals and console emulators for Windows print a trailing newline and carriage return by default.

For convenience reasons, many Linux users depend only on the echo command to output strings and variables. By contrast, the printf command tends to be a more robust choice. To explain why, a quick look at the basic syntax of both can give a hint.

This represents the echo syntax and usage:

The simplicity of the syntax above is handy in many situations, especially on the command line. This explains why echo is so popular. On the other hand, the printf usage looks challenging at first glance:

As you can see, printf utility inherited aspects of its syntax from the homonymous function in the C programming language. The FORMAT parameter signs how to output the ARGUMENT. It makes printf less attractive to use on the command line because the echo command can be faster to complete more simple tasks. Here are examples:

However, the format capabilities of printf are perfect for complexes output tasks when writing in scripts and help to avoid code repetition. As an illustration, imagine you need to format a long .txt file that includes a single column of numerical values. Every five numbers represent a unique value associated with an element; for example, the first represents elementOne, the second, elementTwo, and so on; the sixth belongs to elementOne, et cetera. Your job is to output a table listing every value associated with an element in a different column. To complete this job using echo can be laborious, but printf makes it easier.

There are no problems of using both echo and printf in the same script, because you can utilize only the best of each one. If you want to output a modest new line, for example, it is faster type echo than printf “\n”. The only reason to keep away from the echo command is to prevent compatibility problems between UNIX-like operating systems. A quick search on Google can give you different methods to resolve conflicts regarding the echo usage in different environments. The FORMAT parameter in printf also prevents compatibility glitches.

The documentation for printf gives an extensive list of format strings, modifiers and escape codes that are hard to show in a single article. But, sticking with the basics, here are some essential examples of use:

$ printf "%s" "this is" "the printf" "command"
this isthe printfcommand

The last command uses two conversion characters as FORMAT parameters; the % character associated with the s prints a string of characters given as ARGUMENTS. A good practice is to enclose both arguments and format string in double quotes to allow shell expansions and substitutions. The command also prints the three argument strings without spaces between.

The echo command automatically outputs a newline at the end of the last string; the same does not occur with printf. The command above makes use of the newline escape character sequence (\n) to print each string of characters in a new line. This behavior is very important in shell scripts because the user has total control of the format string without specifying control options.

In the last example, the format string is more restrictive. It prints each string of character accepted as parameters within spaces in the same line.

This final command hints how printf creates columns in tables. The first and second strings of characters are printed from the twentieth column; as the first string of characters has 7 characters, it starts from the thirteenth position. You can think this behavior as a right alignment from the twentieth column in the terminal emulator. Thus, the next strings begin at the twenty-first position and the last one, from fortieth-first, and is right aligned from the seventieth.

2.4 putting anything together in a script

This section shows a collection of bash script functions to use in real world scenarios.

Here the last four numbers of a given Unicode character are used as a variable expansion inside the format string. This function produces an output as follows: 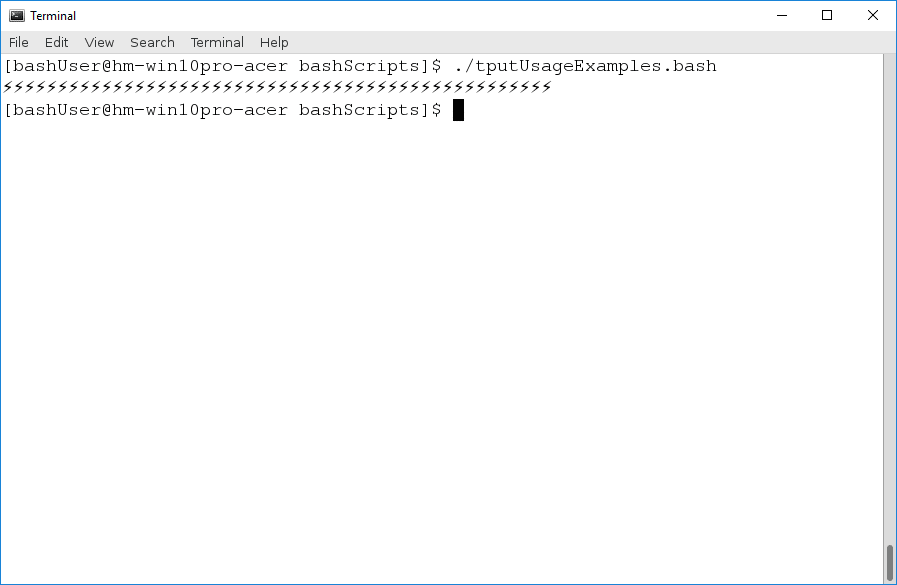 The amp-what website is a good place to find Unicode characters, symbols and icons.

2.4.2   Function to wrap a line with tput capabilities

In the format string parameter of the printf command, up to three tput format variables are given. The ${txReset} variable ensure that only the string of characters is surrounded by tput. Then, the newline is printed. The output of this function is: 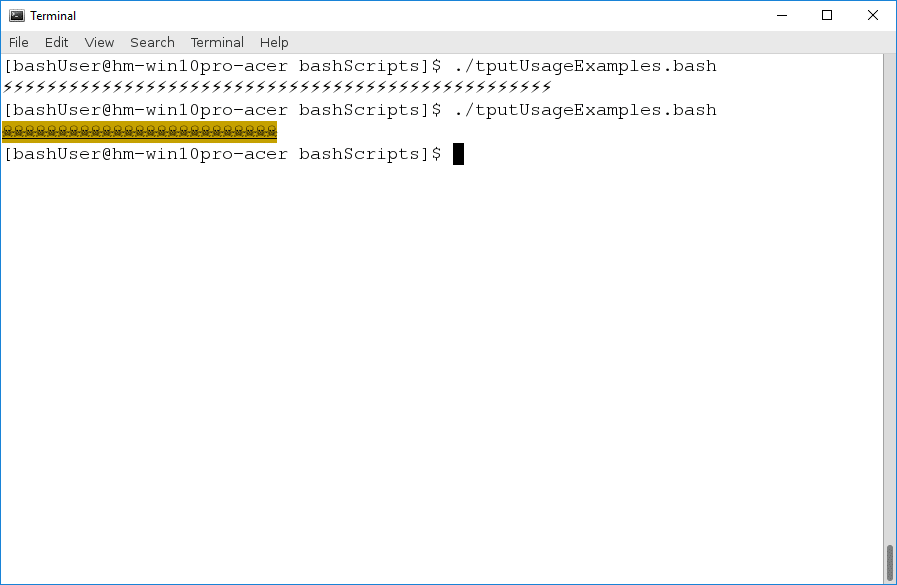 2.4.3   Functions to print a line n times and generate messages

These last two functions combined can generate an alert message like this: 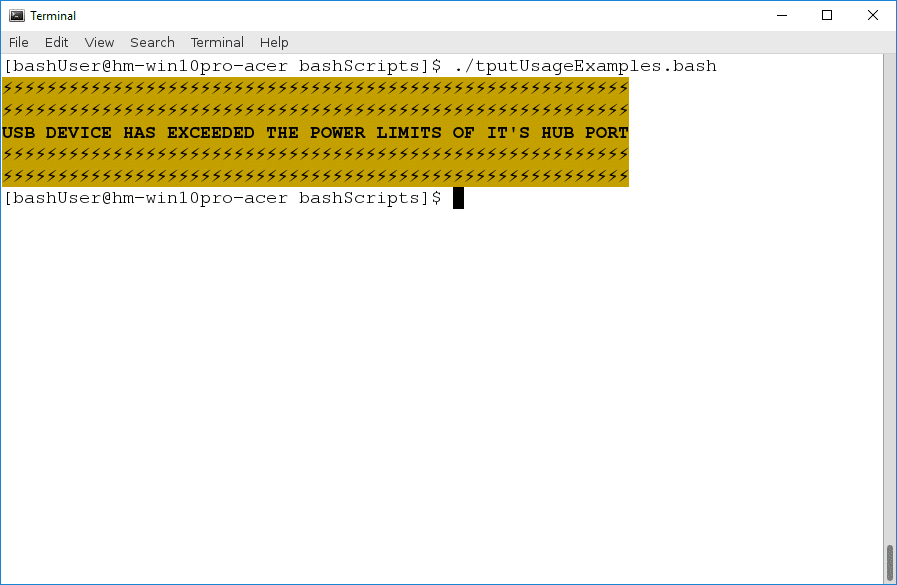 Here you can find the full script.

Now you know the proper way to use this technique, it is your turn to be creative.

Diego Aurino is a versatile Linux server administrator, webmaster, author, and technical writer. He has over 14 years of information technology and creative experience; his first contact with Gnu/Linux was 13 years ago. He also holds a major’s degree in Physics and a master’s degree in Scientific and Technological Education (with honors) both from the Federal University of Santa Catarina. You can find him at diegoaurino.info