Computers are known to heat up, causing them to lose their efficiency in the long run. Over time, computers also tend to become louder, which can be annoying, to say the least.A CPU cooler plays a crucial role in bringing the temperature of your device to an optimum level, cutting down noise and improving your PC’s performance. You can go ahead with a stock cooler (the one that comes with your CPU), and it should still get the job done. However, if you need a more efficient and quieter cooler for overclocking, you should probably go for an after-market cooler.This article provides a list of the top five CPU coolers available on the market. Read on to find out more!

CPU coolers form an integral part of the baseline products that are worth investing in when finalizing your workstation. The following include some of the most important factors worth looking into before selecting a CPU cooler model.

Why do you need a CPU cooler?

As previously mentioned, CPU coolers play a crucial role in extending a machine’s life. Though computers come with pre-built coolers already installed, high workloads will cause your PC to slow down and become inefficient.

CPU coolers are classified into the following categories:

Liquid coolers are undoubtedly more expensive, but they provide more enhanced functions as opposed to air coolers. These coolers generally consist of a plate attached to a closed loop of liquid. Keep in mind that a low-quality liquid cooler could have a higher chance of leaks, which can be catastrophic for your system.

These coolers are a much more high-quality, albeit expensive, alternative. Closed/open cooling loops are flashy and can be custom-made to suit your setup.

It is also appropriate to mention here processors, such as the Ryzen line-up, already come with prebuilt heatsinks. So, you may only need to upgrade these devices to improve your cooling situation.

Thermal Design Power informs us of the amount of heat dissipation on a particular workload. So, be sure to check the TDP ratings for any model you are considering and match the ratings with your CPU. In short, go for a cooler that has a TDP that is higher than the associated CPU. This will ensure that the cooling system can handle the heat generated by your processor.

If It Sits, It Fits

Make sure that the cooler you purchase fits in the available space. Can your desktop house a power connector, radiator, and fans without messing with other components on the motherboard? Air coolers provide dimensions to aid you in assessing the necessary space for heat sink and ventilation.

Other important considerations include the following:

With that out of the way, let us jump right into our list of the top 5 best CPU coolers available. 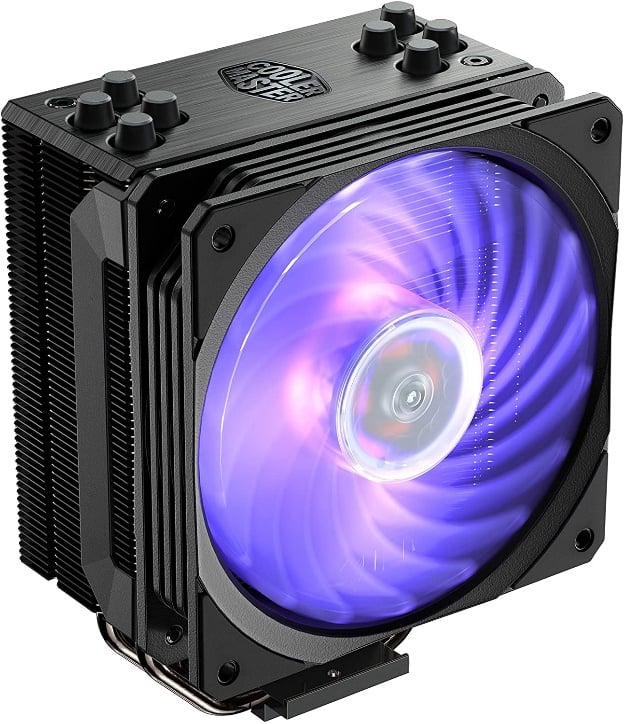 Popular among the masses, the Cooler Master 212 is an excellent example of direct contact technology. It promises efficient heat dissipation in a snap. With an easy installation process, long-lasting regimen, and availability in a mid-range to low price, this model bodes well for any computer system.

The Cooler Master Hyper 212 has a precise set airflow at 57.3 CFM. This is ensured through its stack fin installation, allowing minimum air resistance and easy passage of the cooling airflow into the heat sink.

The Smart Fan Sensor provides protection in case of jams. So, you will not have to worry about cables and components getting in each other’s way. As for its general design, the fan brackets are laid rather simply. This model’s design also makes it easy for you to upgrade or remove the device.

This cooler also contains an RGB LED Controller to customize between the colors of your liking at the touch of a button. This model manages to lower your system’s temperature by 25 degrees and can be set up in various ways.

Keep in mind that the assembly of this model requires close attention, especially when upgrading your PC. Moreover, there is no pre-set thermal paste, so you would have to purchase and apply some yourself. If you are unsure about this requirement, take a look at the CPU thermal pastes that we have recommended. 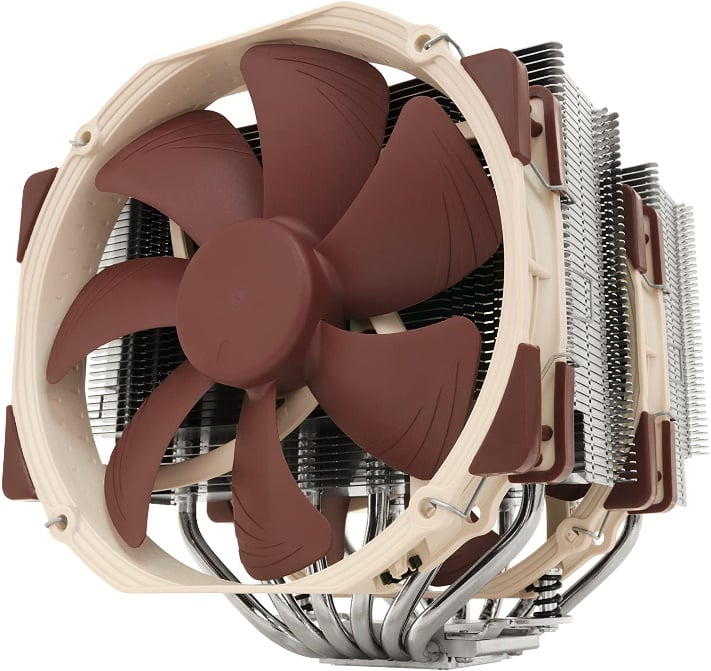 Coming second on our list of the best CPU Coolers is the NF-A15 Noctua. This model boasts a state-of-the-art dual-tower design, carrying six heat pipes and two fans for efficient heat dissipation. Its performance is unparalleled even by some liquid coolers, and at half the price!

This model’s aerodynamic fans measure 140 mm and come with PWM support. The low noise adaptors and automatic speed control give this cooler the ultra-quiet edge it is known for.

This cooler is compatible with most high-end RAM modules, even in single fan mode, while the dual fan mode better suits the standard height RAM.

That is not all! The NH-D15 comes with a 6-year manufacturer’s warranty. This model further includes the high-end NT-H1 thermal paste and SecuFirm2 Mounting System to allow for swift installation. Though this model is a high-class cooler, it does come at a high-end price. Also, this unit may be too bulky for some desktops. 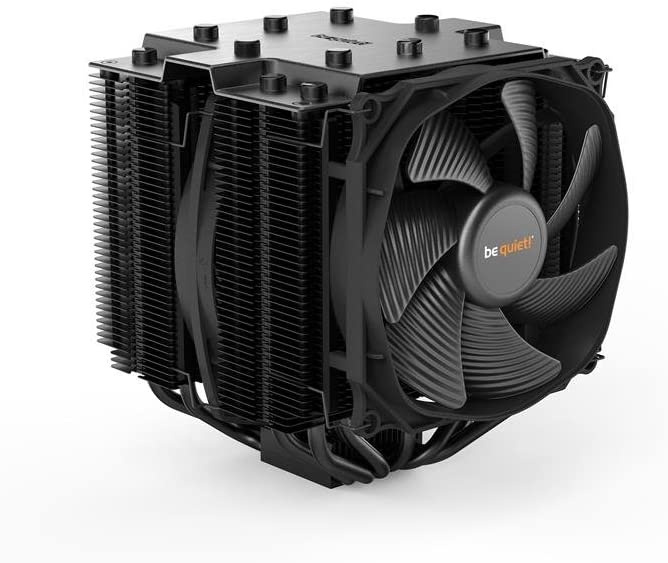 Coming in at a similar price, the next best thing we have for you is the Dark Rock Cooler. This model is also known for its quiet operation via two virtually inaudible silent PWM Wing Fans.

The frame is funnel-shaped and pressurizes the air with added pressure. Surprisingly, this cooler musters only 24.3 Db of noise, even at the highest fan speeds. The structure boasts seven high-performance copper heat pipes. There are also cooling fins and air cutouts to enhance its functionality.

Other useful features include the ability to support all levels of RAM and compatibility with Intel and AMD chipsets. The double tower layout is also an excellent choice for PCs.

All this comes with a 3-year warranty to back its durability. This four-pin desktop cooler is an excellent choice for your setup. Even if you have overclocked your machine to its full potential or are running a high-end graphics card, this cooler manages to keep the temperature in a controlled range.

Next on the list is this worthy liquid cooler by Corsair. The Corsair iCUE H150i Elite is an RGB liquid series cooler. Compatible with several different sockets, this double triple-decker CPU cooler enhances CPU function while helping you achieve a chic look for your setup.

The RGB pump head entails a low-noise cooling system for your CPU. This device is lit with 33 ultra-bright CAPELLIZ RGB LEDs, 8 per fan. The Core Smart RGB lighting and fans are totally up to the user’s control. You can switch over to 6 RGB fans and manage their settings entirely. This model includes speeds ranging from 400 to 2400 RPM. As for the central functional units, the 120 mm CORSAIR ML RGN fans work on a magnetic levitation phenomenon. The strong airflow of this device ensures proper CPU cooling performance. This cooler also boasts a Zero RPM fan profile that halts function at lower temperatures, cutting the noise entirely when not in use.

However, this liquid cooler is very expensive. It also comes with the minute possibility of leaks, which nevertheless poses a significant threat to your processing system. 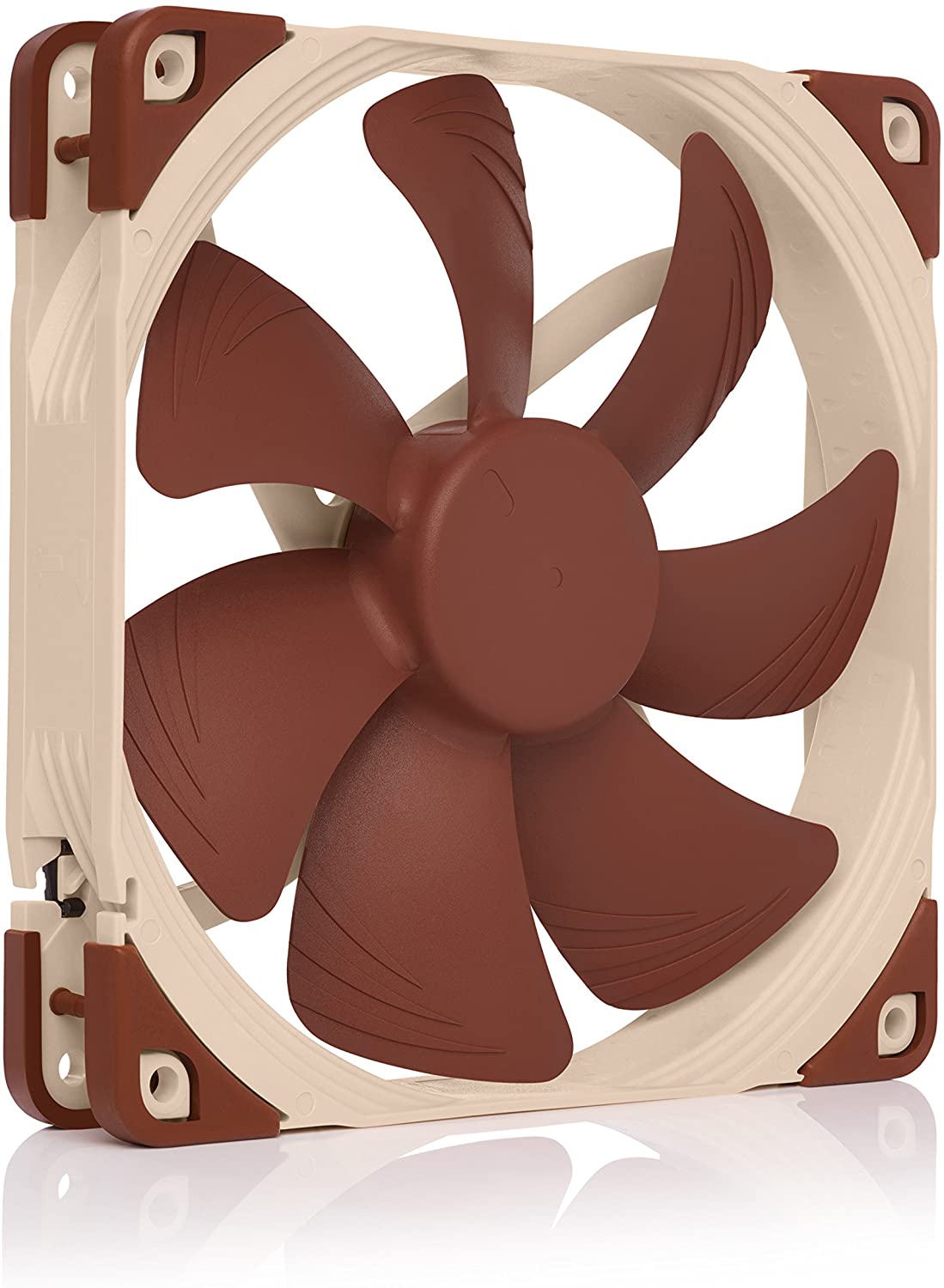 Rounding out our list of the best CPU coolers is the Noctua NF-A14 CPU fan. This device is the cheapest in the bunch, though not the least in quality. The Noctua NF-A14 is an A-series fan that exhibits Flow Acceleration Channels and an Advanced Acoustic Optimisation frame for superior quiet cooling performance.

In this model, you get a 4-pin PWM version for automatic speed control via 4-pin PWM fan headers. There is a broad 300-1500 RPM speed range at which this device operates. The unit comes with silicone anti-vibration mounts, a low noise adaptor, and two PWM fans on the same header.

Such a setup offers quiet, powerful, and long-lasting functionality. However, when functioning at high speeds, the device is somewhat less quiet than the other devices mentioned above. This CPU cooler is also more suited to forming a new system, rather than upgrading an existing setup.

Installing a new CPU cooler is a great way to upgrade your PC performance. These devices are quieter than stock options and provide a much-needed respite for people who use their computers for long hours. Whether it is overclocking or increased loads, over-the-limit temperatures, or strange noises, CPU coolers are a great way to tackle all of these problems with ease.

Remember not to go overboard, though. The high price tag of expensive coolers might entice you into buying on the assumption of quality. But, for mainstream and less demanding jobs, the coolers mentioned in this article should be more than enough. That is all for now! Thank you for sticking with us.