You are already familiar with the Windows operating system where you can access the files, viewing the folders or copying and pasting the documents in another folder. This looks quite easy for everyone but if you are working on Raspberry Pi, you will get a much more simple solution by having full control of your desktop through the terminal and you don’t need to go into each folder and make changes into the files.

1. Updating and Upgrading your Raspberry Pi

If your packages are already upgraded, you will get the output below which shows that you don’t need to upgrade.

When you type in the above command, it will ask you to enter your current password and you have to type the default password in it and then press Enter. Next, you will need to type your new password and press enter.

3. Finding the location of the installed program

Using the above command to find the location of your program and you can move towards the location in no time.

If you wish to change your current working directory there is a command called “cd” or “change directory”. If you type “cd /usr/lib” or any directory path and press enter, it will move you to the “/usr/lib” directory and if you want to see the list of contents of the directory:

You can simply use “ls” next and then press enter to see the content on your terminal. 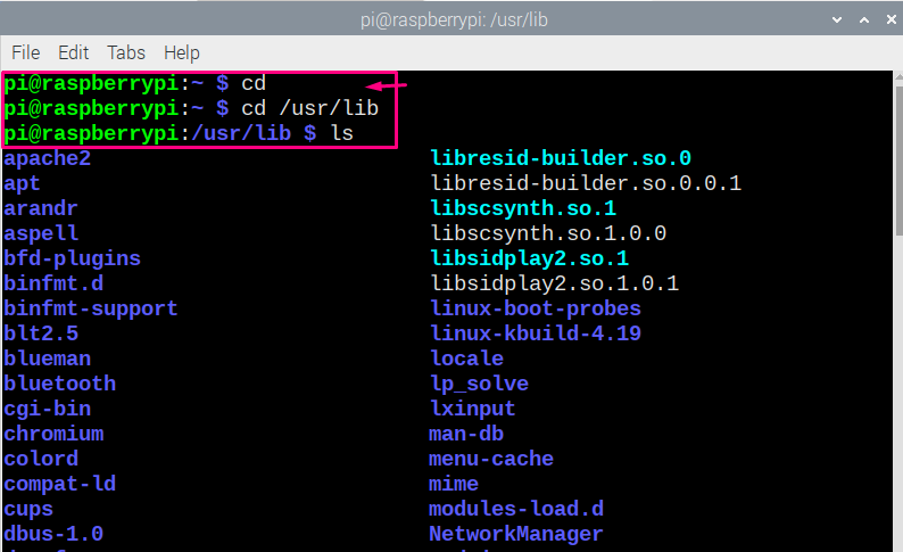 After entering the above command, you will see the configuration of your Raspberry Pi and you can change anything from it if you want. 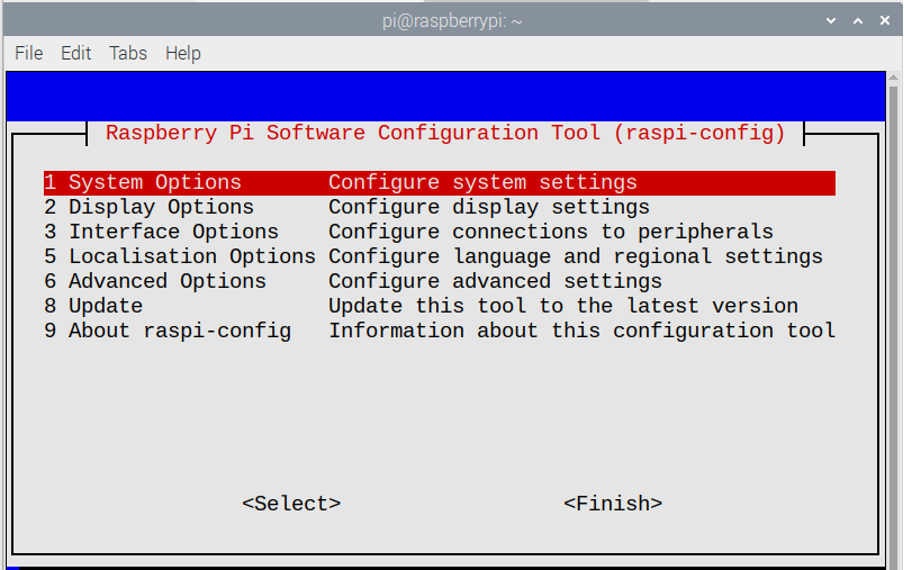 8. Renaming your File on Raspberry Pi

If you wish to rename your file on Raspberry Pi OS, you can do it with the help of “mv” command. If you type “mv [Original File Name] [Renamed File Name]” in the terminal you will get the rename file in your current directory.

If you are interested in shutting down your Raspberry Pi from the terminal, you need to type the below command to shut down the Raspberry Pi.

The above command in the terminal requires root access to shutdown the Raspberry Pi that is why “sudo” is used while “-r 10” means that the system will shut down after 10 minutes. If you replace “-r 10” with “now” it will shut down immediately.

The apt-get command is a widely used command on Raspberry Pi terminal as it  will help you to find the required packages to install any software on your Raspberry Pi system.

Suppose, you are trying to install a software “kodi” on your Raspberry Pi desktop so for this purpose you need to type any command from the below two apt and apt-get commands in the terminal to install the “kodi” on Raspberry Pi. 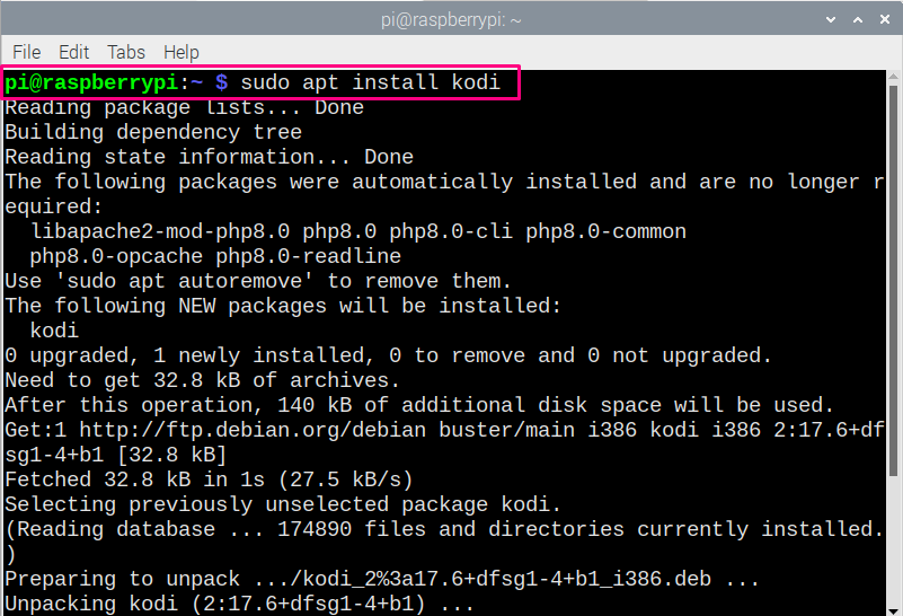 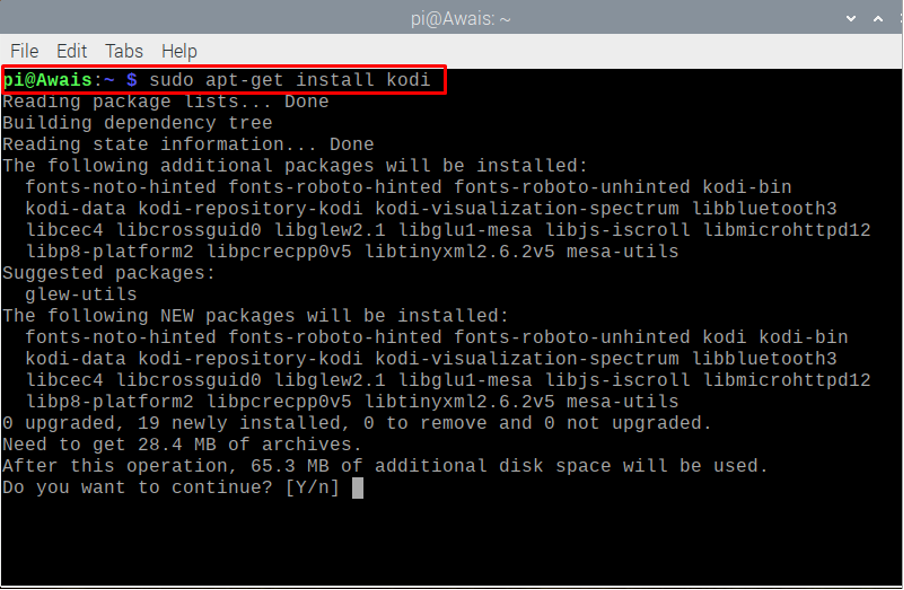 As from the above image, you can see that both commands will install the “Kodi” software for you so you can select any command.

Apt command is also used to remove the software packages as well. For that you will need to write the below mentioned commands if you remove any software from the Raspberry Pi OS. In our case as we are removing “kodi”, the commands will look like below. 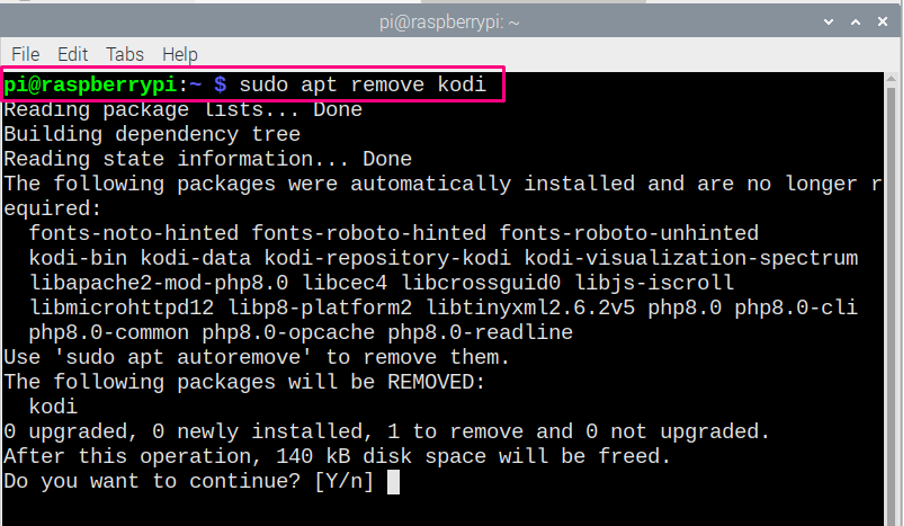 You can use the below command as well if you want to remove a software from your Raspberry Pi as mentioned below. To remove other software, you will need to replace “kodi” with the name of the other software.