In today’s era when the data is ever growing, the people who deal with data everyday work mostly with unstructured textual data. Analysing all of this data at a faster rate is necessary and many a times, crucial too. Sometimes, we face an issue of extracting data from PDF files. Extracting textual data from PDF file is cumbersome and a big manual task as well.

Wouldn’t it be just cool if we had some programmed package which could accept some PDF files and return the text it contains?  It turns out that we do have a library to do just that.  Tesseract is an open source framework written in  C++ which allows us to work with PNG images, JPG images and PDF files and return the text the file contains so that we can use that text as we want.

In this lesson on Tesseract with Java and Maven, we will see how we can develop a simple Java application which accepts a PDF file and returns the text it contains with Tesseract OCR service.  We will also see why Tesseract is so successful. One of the reason for Tesseract being so successful package is that it is backed by Google itself.

To work with this lesson, it is important to install Tesseract OCR Engine on your system. Head over to the official Github repo to follow the installation instructions. Directly from the GitHub repo, “Tesseract was originally developed at Hewlett-Packard Laboratories Bristol and at Hewlett-Packard Co, Greeley Colorado between 1985 and 1994, with some more changes made in 1996 to port to Windows, and some C++izing in 1998. In 2005 Tesseract was open sourced by HP. Since 2006 it is developed by Google.”

We will start by making a simple Java project which is based on Maven and contains the following maven dependency:

This is a Maven dependency which is provided by a wrapper project which you can refer here to gain more understanding. From the website, Tess4J is simply described as a Java JNA wrapper for Tesseract OCR API.

We have a very simple project with a single source code file. The current project structure will look something like this: 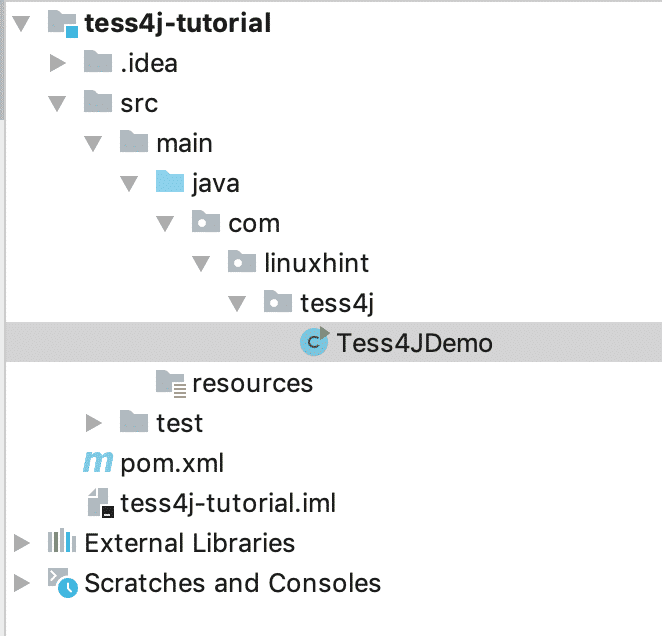 As we mentioned, we have a single source code file which we will use. We might put a PDF file in the resources folder a little later to demonstrate reading a PDF file and extracting text from it.

Once we have a sample source code class where we can start (as shown in the project structure in the last section), we can start adding some code to it. As of now, it is an empty class:

As we have talked about Tesseract before, Tesseract can be used to extract text from documents like PDF documents. To do this, we have to train Tesseract library about how documents are structured and what text it can contain.

Apart from this, as Tesseract supports about 37 languages, you have to explicitly inform Tesseract about which language we are reading right now (if that information is actually available to us).

We will define a simple Java method for Tesseract:

Inside this method, we can make a new instance of Tesseract from the Maven library we added earlier:

Just to make it clear, here is the import statement we have for the above instantiation:

As we are using a Macintosh for this tutorial, our data path looks something like the above. Apart from the training data path, I also provided Tesseract with the information that we will be using the English language.

Next we will be telling Tesseract that the output we need is in the format something called as the HOCR format. Basically, HOCR format is a simple XML based format which contains two things:

We can enable HOCR format as:

Finally, I can return the instance we made above. Here is the complete source code of the method we just defined here:

You might not believe it but setting up a Tesseract object was that easy. We can put it to use now with a simple definition in a main function:

Can you guess what is left now? The only thing we need to do now is providing a file to Tesseract which it can parse and read its Text. Now we can, easily pick up a PDF document to  read it but that sounds quite textual. Why don’t we try an image straightaway?

For this lesson, we created a very simple image which we will put to use: 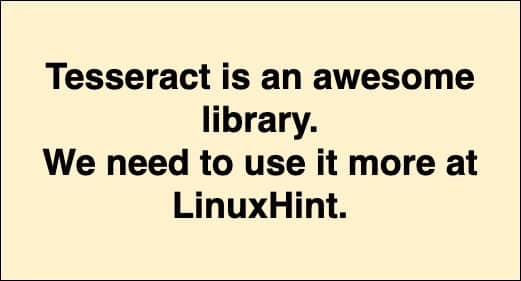 Once you have this image (or any other image of your choice), we can complete our main method so that we can finally parse the selected image:

If we look closely, there is nothing magically which happened here. That is the power of this simple wrapper for Tesseract library we are provided with.

Now we are ready to run the above program. You can run it to see a weird output in XML format. If you’re having trouble of understanding the output, simply comment out the property where we enabled HOCR output. Once you do that, you will see a simple output as:

A quick note that try to avoid PNG images and use JPEG images instead if you’re working with images at all. This is because Tesseract is very bad at reading PNG images due to its compression techniques.

According to Tesseract page FAQ itself, “Tesseract is an OCR engine rather than a fully featured program similar to commercial OCR software such as Nuance’s Omnipage. It was originally intended to serve as a component part of other programs or systems.

Although Tesseract works from the command line, to be usable by the average user the engine must be integrated into other programs or interfaces, such as FreeOCR.net, WeOCR or OCRpous. Without integration into programs such as these, Tesseract has no page layout analysis, no output formatting and no graphical user interface (GUI). “

In this quick lesson on Tesseract and Java, we made a very simple example of Tesseract OCR engine which allows us to read text from various format files like PDF and image files. This is a very important skill to have as reading text from files like PDF and images is the first step you need to do if you want to apply any Natural Language Processing (NLP) techniques on these data formats.

The fact that Tess4J is available is awesome because this way, we can actually use a C++ library in a very simple environment which is otherwise hard and tricky to use to. Of course, all the source code of the lesson is available at Github. Please share your feedback freely about the lesson on Twitter with @linuxhint and @sbmaggarwal (that’s me!).