Terraform is a tool used to manage infrastructure as codes with ease. It’s developed by HashiCorp as an opensource project for cloud developers to manage their infrastructure in very high-level language (HCL). The biggest advantage of this tool is it abstracts out the major infrastructure services such as AWS, OpenStack, Vultr, Digital Ocean, Google Cloud and allows developers to unify their configuration in a single standard format. On top of that, automation and detailed execution are also possible with Terraform. It’s available in Windows, Linux, MacOS platforms, and can be used with any major cloud platform with moderate level of technical knowledge.

This guide demonstrates how to use Terraform with Google Cloud platform. This guide assumes, the user has an account in Google Cloud platform and it’s ready to use, if not it’s possible to create a free trial account with ease for a year. However, Google Cloud requires a valid credit card number to be submitted in order to access its console; hence make sure it’s dealt with before proceeding ahead.

Google Cloud platform consists of a large number of services; hence it’s difficult to cover them all in a single guide, and therefore, this guide covers only the Google VM instances section. It demonstrates how to install a Nginx web server in an Ubuntu VM instance in Google Cloud infrastructure.

Since the guide is about terraform, obviously it has to be installed in the system. Additionally, an SSH key has to be generated in order to access the VM instance.

How to Install Terraform on Ubuntu

Terraform can be installed in two different ways. The first method is manual way, which requires the user to download and install it in the system, the alternative and the most recommended way is automated way, which downloads and installs the terraform in the system with a couple of code lines. Follow the following commands to make it happen.

How to Generate Your Own SSH Key

After installing terraform, the next important step is generating your own SSH public/private key pair to communicate with the VM instance that is about to be created. SSH key pair provides strong security over the traditional password/username authentication; hence following this option is strongly recommended even though it’s not mandatory.

1. On Ubuntu shell, type the following command to generate the SSH Key pair. 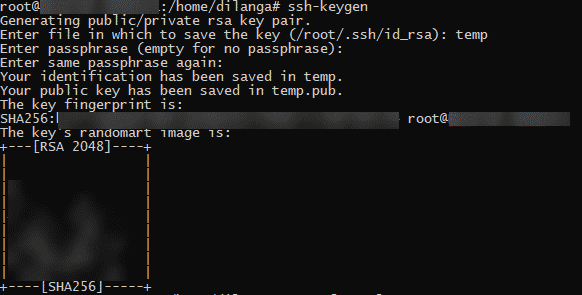 Configure the Google Cloud with Terraform

Once aforesaid two segments are completed, go ahead and create a free trial account in Google Cloud. Since creating an account is a simple process, it’s not described here. After getting access to the Google Cloud console, follow the following steps to configure Google Cloud with terraform.