Sometimes we need to store the command output into a file to use the output later for other purposes. `tee` command is used in Linux for writing any command output into one or more files. This command works like the shape of the capital alphabet ‘T’ that takes input from one source and can store the output in the multiple locations. How this command can be used in Linux is shown in this tutorial by using multiple examples.

This command can use four types of options and store the result in single or multiple files. The options of this command are described below.

One or more file names can use to store the output of the command.

Here, the first command displayed the output of `ls –la` into the terminal and wrote the output in the file, output.txt. The second command showed the content of output.txt file. 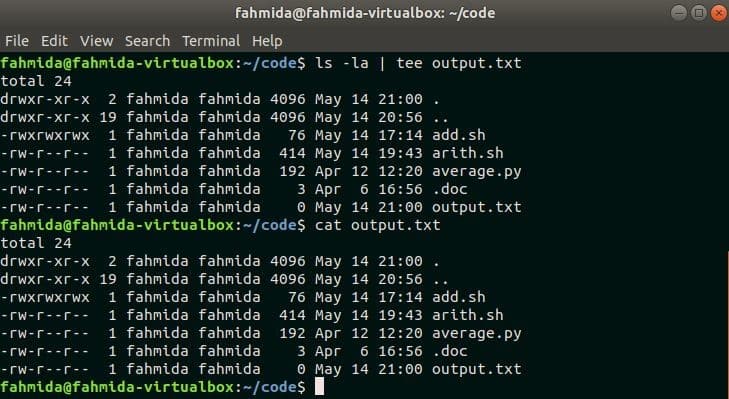 Example-2: Appending the output into an existing file

If the output of any command is written into an existing file by using `tee` command with ‘-a’ then the content of the file will not be overwritten. Here, the output of `pwd` command will be added at the end of the file, output.txt. Run the following commands from the terminal.

Here, the first command displayed the current system date in the terminal and stored the value into two files, output1.txt and output2.txt. The second command showed the content of these two files which are identical.

`tee` command with ‘-i’ option is used in this example to ignore any interrupt at the time of command execution. So, the command will execute properly even the user presses CTRL+C. Run the following commands from the terminal and check the output.

`tee` command can also be used to write the bash script output into a file. Create a bash file named add.sh with the following code that will take two input numbers from command line arguments and prints the sum of those numbers. `tee` command is used in this example will write the output of add.sh into the file result.txt.

Run the following commands from the terminal to write the file and check the content of the file.

Here, 50 and 90 are passed as command line arguments into the script, add.sh and the output is written into the file results.txt. `cat` command is used to match the output with the content of result.txt.

If you want to write the output directly into the file without displaying in the terminal, then you have to use /dev/null with `tee` command. Run the following command do this task. 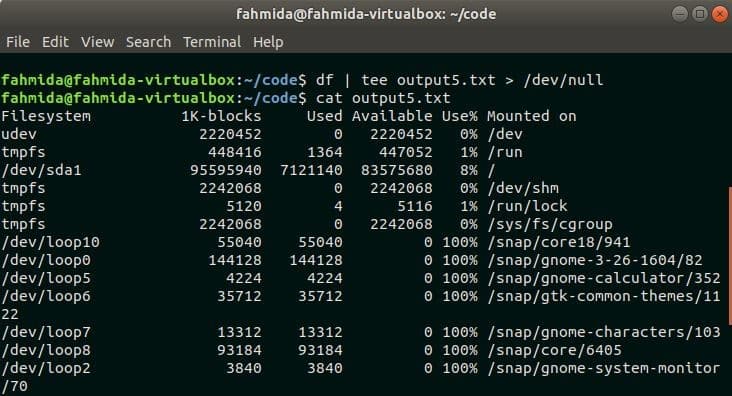