Many of us heard about and may even have tried many of the loops and statements in the programming world. Many types of loops exist in programming languages, one of them is the “while” loop. This loop is used to execute the number of lines in its “do” clause when the condition is satisfied. Let’s see some examples of using the “while” loop with different syntaxes in the bash script.

The very first method of using a while loop in the bash script is with the simple brackets. So, start by opening a shell terminal using “Ctrl+Alt+T” at the desktop of Ubuntu 20.04. After the terminal opens, create a new bash file in it. For file creation, use the “touch” instruction with the name of a file having a “.sh” extension as shown in the affixed image.

Open this file in the terminal with the use of some editor. We recommend you to utilize the “Nano” editor as per the below-shown instruction.

Upon running the bash file, we have got the below-shown result. The value of variable “z” has been incremented by 2 each time until it reaches 10.

The second method to use the while loop in the bash script is with the square brackets. So, let’s open the same file once again to update its code. After the bash extension, we have added a variable “z” with a value of 1.  The “while” loop has been initialized with the condition in its square brackets. The flag “-lt” stands for “less than”. If the value of “z” is less than 10, it will execute the “do” clause. The do clause contains an “echo” statement to print out the variable value and increment it with 1.

Upon executing the bash code, we have got the result shown below. The value of variable “z” has been incremented and printed out from 1 to 9. 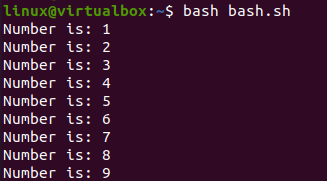 Let’s change the condition in square brackets of a while loop. The flag “-le” represents “less than and equal to”. The remaining bash code is the same. The condition checks that if the variable is less than or equivalent to 10, implement the “do” clause. Print out the variable value and increment it by 1.

When we have executed the bash code, it shows the result starting from 1 up to 10. 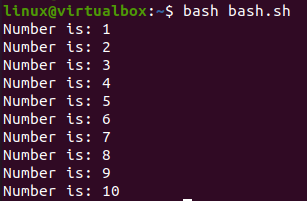 As the value 33 is greater than 5, so the value has been displayed on the terminal and decremented by 3 until it reached near 5. 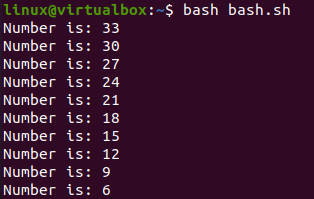 Let’s take another method to use while loop in bash script. In this method, we will be using a file to read its data with the help of a “while” loop. Let’s say we have a file test.txt with some text data in it, as shown below.

Open the bash.sh file again to update it. After adding the bash extension, we have declared a variable “file” containing the path to a file.  The “while” loop has been initialized to read the file data. So, the model has been set to “read”. If the file has permissions to be read out as the flag “-r” indicates, then each line from the file would be read out using the “echo” statement within the “do” clause.

Upon running this bash script on the terminal, we have got the data of a file in our terminal as an output. This output data is similar to the data in the text file “test.txt”.

Another way to use the “while” loop in a bash script is without any condition mentioned within it. You can also use other loops or statements within it. So, after adding the bash extension in the same file, “bash.sh”, we have initialized a “while” loop with no conditions. Within the “do” clause of a “while” loop, the read statement is used to get input from the user in two variables, “x” and “y”. The variable “z” has been initialized, which is taking the sum of both variables “x” and “y” as its value. After this, we have used the “if” statement to check a condition that if a value of variable “x” equals the 5, the “do” statement will be printed out. Within the “do” clause, the echo statement will be printed out, and the loop will be broken. The “while” loop ends here. 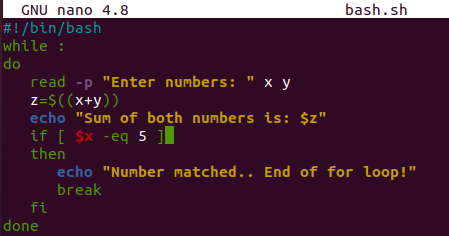 After running, the user has added 2 and 4 and got the sum “6” at first input. On the second input, the user added 4 and 8 and got 13. The last input added 5 and 2 and got 7 as the sum while the loop terminates here.

This guide contains 4 examples of the different syntaxes of using the “while” loop within the bash script. Initially, we have elaborated on the basic introduction of this guide. We believe that all the examples implemented here are easy to do for every bash user.