Hanging out with friends hasn’t been the same since the COVID-19 pandemic. If you feel the same, you’re going to love Syncplay — a synchronization tool that lets you watch movies with your friends over the internet.

Syncplay is free, open-source, and rich with awesome features. It supports a number of media players and works cross-platform. So, it doesn’t matter if you’re on Linux and your friends are on Windows or macOS. You can still enjoy a shared video experience on the internet.

The purpose of Syncplay is to synchronize the play state and position of the video being played among multiple users. This means that, for instance, if one user seeks or pauses the video, the effects apply to all connected users.

In this guide, we will go over everything there is to know about Syncplay: its features, how it works, and most importantly, how to use it. So, without any further ado, let’s get into it!

Syncplay is based on server-client functionality. You would install the Syncplay Client on your system and connect to a virtual room on a Syncplay server as a user. A media player is hosted in this virtual room which all server users can control.

These rooms are entirely private, and all information sharing is hashed. In fact, you can take your server safety a step further by setting up a password as well. No Syncplay users can view or access any other room than their own.

With that said, we’re ready to install Syncplay and start using it. However, your system must fulfill some software requirements before running this nifty little program. Let’s check out what they are and where you can get them.

Step 1: Getting the Right Media Player

Syncplay supports several media players and the most common ones are interoperable with Syncplay. Here’s a list of the supported media players, and you can get any of them:

Syncplay also has an in-chat feature that lets users communicate in the room. This additional facility is highly compatible with mpv, making it a promising choice for the rest of the players. Furthermore, if you want to play online streams, you will need the youtube-dl program too.

In addition to a proper media player, you’re also going to need some packages and dependencies to get Syncplay up and running. Below is a list of packages required for Syncplay:

Once you have all the necessary packages, you can finally go ahead and install Syncplay. This can be done by downloading the latest Syncplay tarball. Once you have it, run the following command to start the installation:

With that done, Syncplay should be installed and ready for use!

Upon the first run, Syncplay should look something like this: 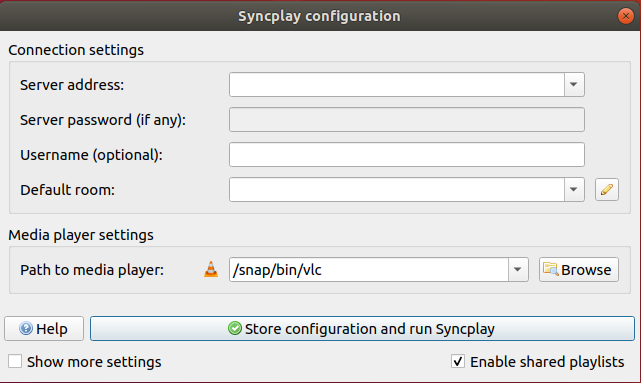 As you can see, the first step is to configure Syncplay. There is a list of available public servers — all the users who want to be synced must select the same server. Syncplay developers recommend not using ports 8999 and 8995 as they’re usually overloaded.

Next, there is no need to enter a server password as that is only a functionality for private servers. Similarly, the username is optional and can be anything you want.

Lastly, the default room must also be the same for all the users. It is recommended to make the room name somewhat cryptic as a password doesn’t protect your server. A complicated room name would keep random people from entering, i.e., serve as a password. Also, keep in mind that room names are case-sensitive. 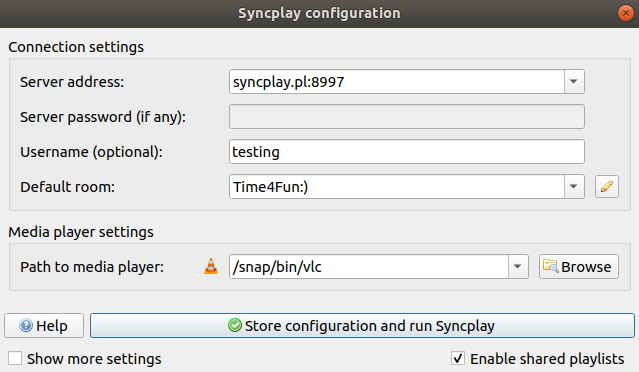 With that done, go ahead and click the run Syncplay button:

The window on the left contains some information about your server connection and room, and the right one is the media player — VLC in our case. You can drag and drop any video present on your hard drive into the player or browse through your files using the Media tab. The same can be done with a YouTube video. 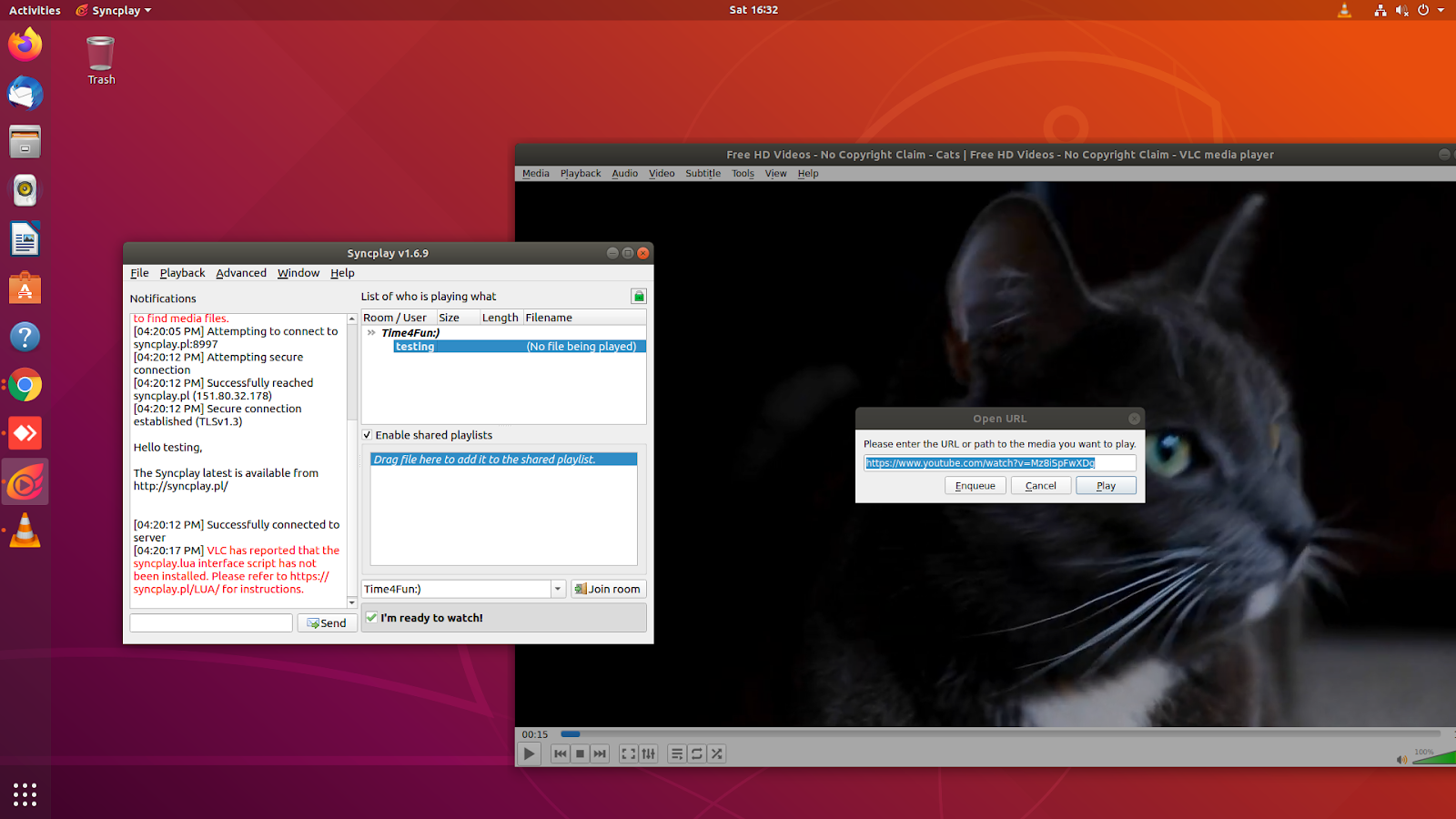 In case you want to watch a video that isn’t on YouTube, you will have to whitelist it in Syncplay. This can be done by going to the Advanced tab and selecting Set Trusted Domains. You can type in whichever website you want to whitelist in this box.

If you want to watch the same video with your peers, they must have the video on their system. The whole process must be replicated by each user. Once everybody is ready, click the “I’m ready to watch!” button.

Having done that, you will now be watching your favorite videos in sync with your friends. You can go ahead and test the synchronization by seeking or pausing the video and seeing the effect applied to all users.

Watching videos or movies should be a shared experience among friends and family. Luckily, Syncplay is the perfect utility that does just that. With Syncplay, you can join public servers, set up private rooms, and enjoy videos in sync with your peers.

One of the few drawbacks of Syncplay is that all the users connected to a room must have the same video on their system. However, that does nothing to diminish all the other excellent features Syncplay offers. We hope you found this article helpful and have fun synchronizing. Check out other Linux Hint articles for more tips and information.