Tmux is an open-source terminal multiplexer application for efficiently managing multiple terminal windows. People who have previously used the Terminator application are mostly familiar with the notion of tab management in Linux Terminal. With Tmux, we can split the terminal into a number of panes. We can adjust these panes by moving around, resizing, and switching between them. This helps in curbing the pain of managing multiple windows and tabs of the Gnome terminal.

Note: In this ‘HowTo’, we have used the ‘Ctrl+b’ as the prefix; if you configured some other prefix, then replace the command with yours’ prefix.

This guide will explore how we can install Tmux and, more specifically, “How to swap panes in Tmux”. We will use Ubuntu 20.04 as the base system for this guide. Let us first start with installing Tmux.

Major operating systems like Linux, MacOS, and Windows Subsystem for Linux (WSL) provide Tmux software packages from their official repository. So to install Tmux on Ubuntu 20.04, we can simply use the package manager or Software center as described below:

To overcome this error, type “export TERM=xterm” on the terminal and hit enter. Now again, run the ‘tmux’ command, and this time the error should not appear.

We can use three ways to send commands to a Tmux terminal:

Using the Prefix keys: Tmux uses a combination of keys called prefix key, which is by default ‘CTRL+b’. This prefix is followed by one or two more keys which Tmux will interpret for a particular operation. For example, we can detach from a session using [Prefix+d].

Using the command line: Tmux commands can also be used from the non-Tmux terminal or shell prompt. These commands are preceded by the ‘tmux’ keyword. We have illustrated this method in the below section.

When we have multiple applications running on different panes in a Tmux session, we sometimes need to arrange them according to some good sense. This actually helps us to head our work in the proper direction, making it more coherent. E.g., we open up a pane for a web server application, one for editing a file (say tmux.conf), one for viewing the CPU and memory stats with the ‘top’ command. The position of each pane is shown below: 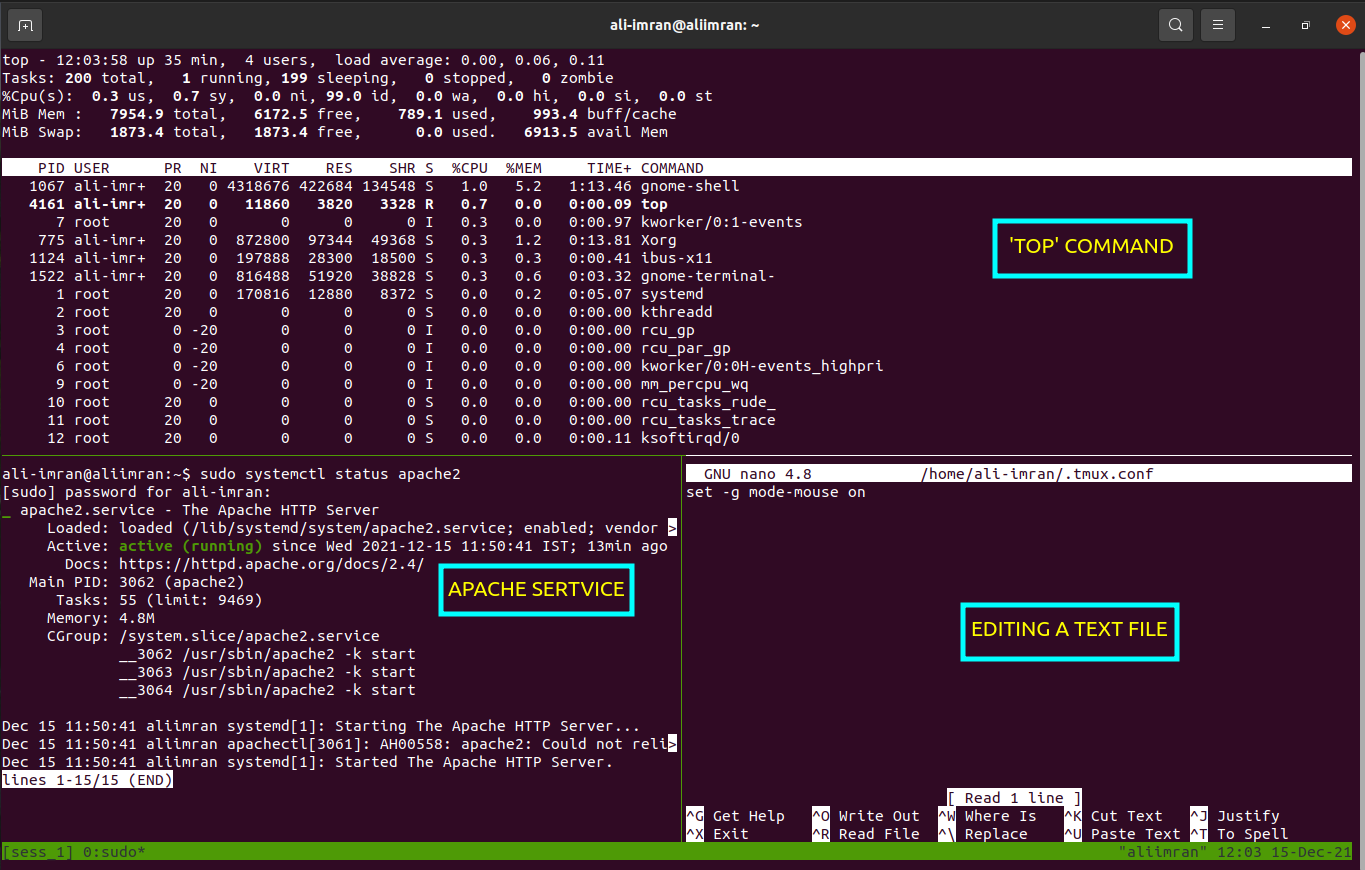 I don’t like the above layout as it appears very awkward to me. Let us change it sensibly: Edit the file in the top pane, manage the webserver from the bottom right pane, and run the ‘Top’ command in the bottom left pane. Let us do the swapping work now. 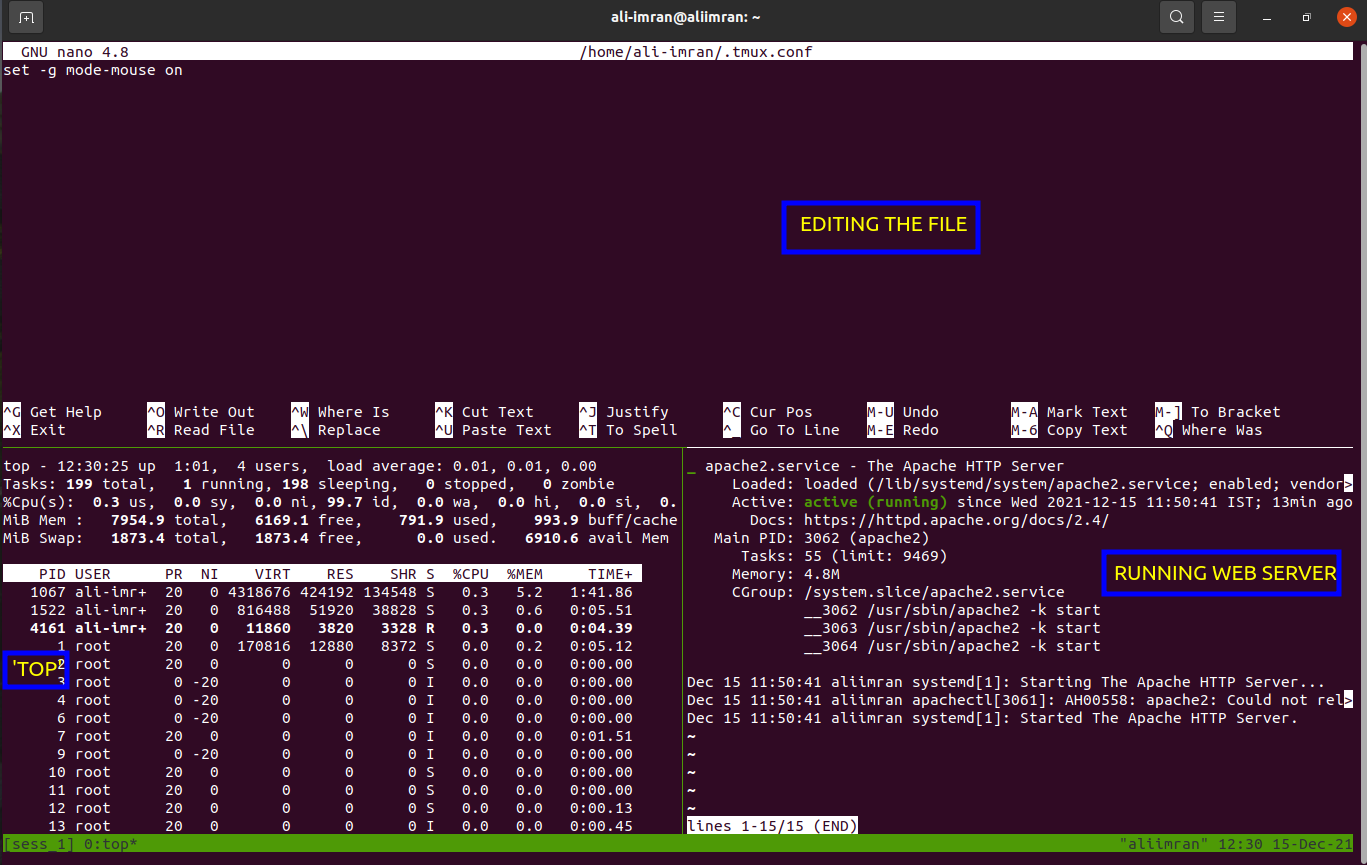 If we need to move in an anticlockwise direction, use the ‘Alt+o’ combination instead of ‘Ctrl+o’.

Now let us swap the position of the two bottom panes. For this, we can use the key-binding ‘Prefix’ followed by ‘{‘ or ‘}’. The braces to use depend on the direction you want to move towards. 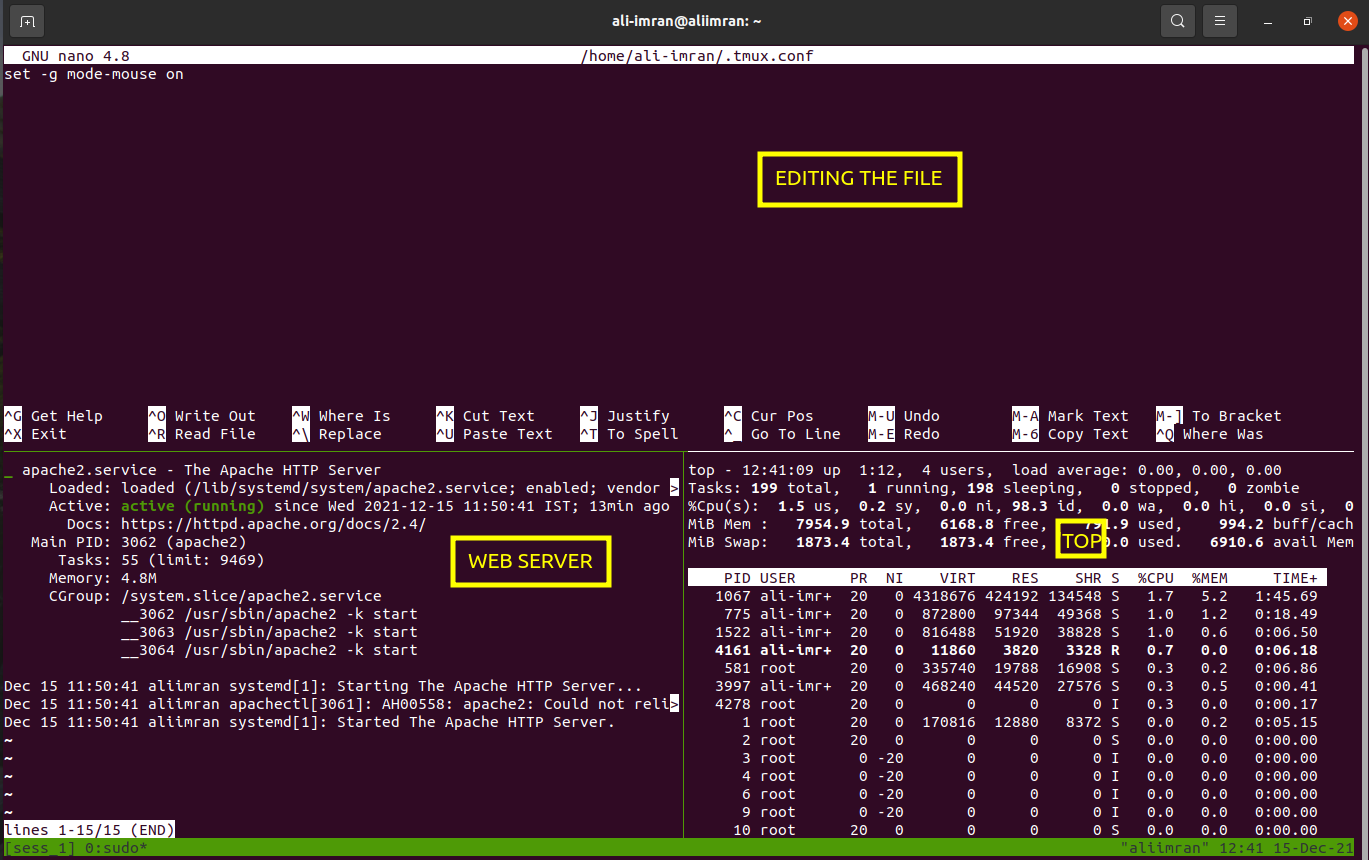 To do the above pane management, we can also use the below command from the Tmux command prompt:

In this guide, we have learned about the installation of Tmux, its basics, and more specifically, “How to swap panes in Tmux”. A more detailed explanation of various Tmux operations can be found on the Tmux Man pages or on the Github page of Tmux.