Sudoku solver in Python is a beginner-level exercise or project for college students. Writing a code for Sudoku solver using Python language makes it easier and simpler.

Sudoku is a logical puzzle grid game in which players insert numbers from one to nine in a grid with nine squares divided into nine smaller squares, so that each number appears once in a horizontal line, vertical line, and a square. This game is quite popular among mathematics lovers. Usually, sudoku is printed in daily newspapers, and the solution is published on the next day.

This article deals with writing code in Python to solve the sudoku puzzle using the recursion method. First, we will do the GUI part and then, proceed to solve the puzzle.

We will be creating GUI sudoku solver using the Jetbrains Pycharm IDE. Since we are creating an impressive sudoku solution with GUI, we will import the Tkinter library. Let’s start:

Importing Library and Writing the Code

Create a label that will indicate the usage of the program. Place the label on the 0th row and the first column using the Grid method. The set span of the column to 10 centers the label in the window.

Now, create another label that comes into play if the sudoku puzzle cannot be solved and initialize it with an empty string. The foreground color for the error label will be red in our case. Use the Grid method to place the label in the 15th row and 1st column, column span to 10, and padding to 5.

Create a label for the success of the sudoku solver. You can copy the code for the previous label and change the foreground color to green, and name the label as solved.

Let’s create an empty dictionary to store each cell of the input grid. Define a validation function to control the input in the cells. It will take the value of the cell as an argument.

Write the code to check the value if it is a digit or an empty string that allows users to delete the value. To restrict the input to only single-digit use and check if the value is lesser than 2, return the value of the Boolean expression.

Register the function to the window using the roots register method. Divide the sudoku 9×9 grid into smaller chunks of 3×3 by writing a function. This will take the row no., column no., and background colors as an argument.

Use a for loop with a range of three which will indicate the rows. Use another for loop inside it to indicate the columns. Now, create an entry widget with a width of 5, bg as bg color, and the center aligns the text using Justify. Also, validate the key to validate function upon the keypress.

Validate the command to a tuple of registered function and %P substitution code, which will pass the new value to function upon change. Place the widget at the sum of Row number as i+1 row and the sum of column number as j+1. You can set stick to new, which will make it sticky from all directions. Set padx and pady to 1 and internal padding to 5.

Now, store the entry widget in the dictionary with a tuple of row and column numbers that we used to place the widget as a key.

Write a Function to Draw a 9×9 Grid

We will write a function to create a 9×9 grid. I have used a two-color combo for this grid. The first color signifies the value. Use a for loop in range 1, 10 and step size as 3 for row no. Use another for loop inside with Range 0, 9 with step size 3.

Write a Function to Clear the Sudoku

We will write a clear values function for sudoku, which will clear the values in each grid cell. First, clear the errors and success labels, Again, iterate through the rows and columns. The range for the row would be 2, 11, and the range for columns will be 1, 10.

Write a Function to Get Input From the User

Write the get values function and declare an empty list to store the values for each cell for each row. Again, clear all the labels to clear the text, if any. Use the for loop to iterate over the range 2, 11 for the rows and 1, 10 for columns. Now, get the value of cells using the entry widgets get method. If the value is the empty string, we will append a 0 to the rows list. Else append an integer value to the list.

Using the button widget, create a button. Set the command to get the values, text to solve, and width to 10. Now, place the button on the 20th row and first column with a column span of 5 pady as 20.

Create another button by copying the same code, set its command to clear values function, and text to clear. Place this button in the 5th column.

Call the 9×9 grid functions and roots main loop method to launch the instance of our created window.

We will first declare a variable that will hold the number of rows and columns. Write the question that will validate a given number for a given row or column. This will take sudoku, row number, column number, and number as arguments. To check if the same number exists in the same row, we will use a for loop in the range of 9. The for loop condition goes like this: if the number of the given row and ith column is equal to num, we will return false.

Similarly, we will check if the same number exists in the same column. Use a for loop in the range of 9. If the number of the given column and jth row is equal to num, we will return false.

Use two nested loops in a range of three. If the number at the start row plus ith row and start column plus jth column equal to num, we will return False. At the end of the function, we will return True, which will be executed if none of the previous conditions are satisfied. 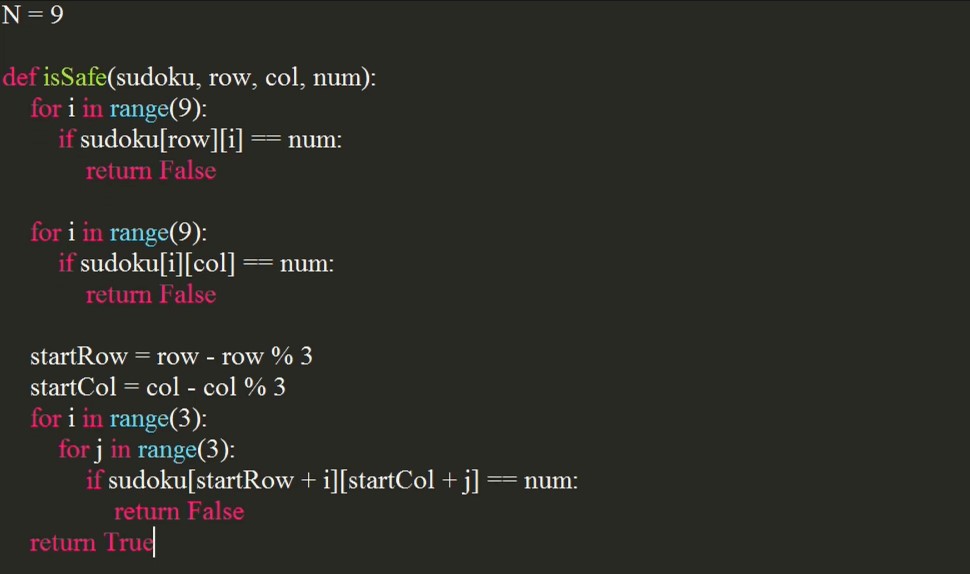 We will be writing a sudoku solver function to assign values to non-assigned positions. This will include sudoku matrix, starting row number, and starting column number as arguments.

If the number at the given row and column is greater than zero, we will return solve sudoku function for the next column. Use a for loop in range 1, N+1 to check for each number from 1-9.

In the loops code block, we will reassign 0 since our assumption was wrong and it validates the next value. Return false at the end of the functions code block. 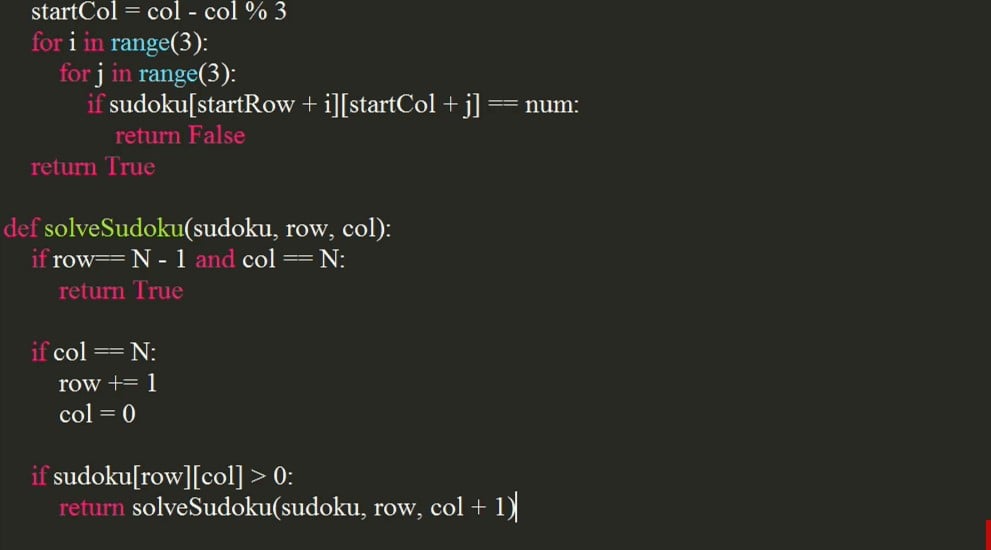 Save this file as solver.py to the same folder where you saved your GUI file.

Open the GUI file and import the solver function from the solver.py file. Write update values function, which will update the cells and display the solution of sudoku. This will take the sudoku matrix as the argument.

Call the solver function and pass the sudoku to it. If the solution is not equal to NO, use a for loop in range 2, 11. Inside the for loop, use another for loop with a range of 1, 10. Delete the existing values from the cell. Use the insert method to insert the value at the 0th index.

The value will be the number at rows minus second row and column minus first column. We subtract 2 and 1, respectively, since the matrix is zero-indexed.

After the loop is set, the text of the solved label to sudoku is solved using the configure method. In the else part, we will set error labels text to no solution exists.

Call the get values function at the end and pass the board matrix.

As of now, our final program is ready for execution.

You can create a sudoku solver using the recursion method as we have done here. But developing a sudoku solver with GUI puts more weight on your coding skills and makes it easier to solve the sudoku puzzles.

This post is divided into parts for the maintainability of the code. I hope you loved reading this article. Check the other Linux Hint articles for more tips and tutorials.