The examples in this guide will carry out using the Ubuntu 20.04. Thus, the GCC compiler needs to be installed to perform these examples using the Ubuntu 20.04. When GCC is installed, a little amount of the C code is written to show how to utilize the “strftime()” function. We utilize some header files at the start of the code. We have a “stdlib” header file which we utilize for the different functions such as memory allocation, process management, etc. Then, we have the “stdio. h” header file. This header file is the standard input/output header file. We also utilize the “time. h” as we have to use the “strftime()” function toformat the date and time. Then, we have the “define” directive and use the “size” as “50”.

We utilize the “main” method here and it is the “int” data type. Inside the main() function, we declare a variable named “t” of the “time_t” data type. The “tmp” is declared here as the “struct tm”. Then, we have a “char” array of the name “MY_TIME [size]” and pass the “Size” here. We use the time() function and pass the address of the “t” variable as “&t”. 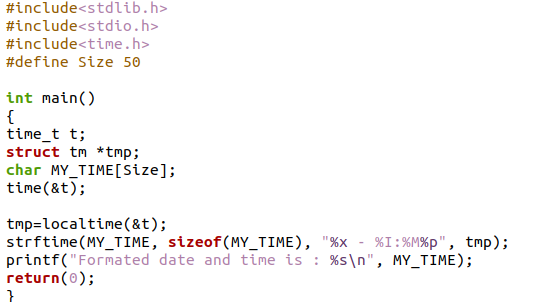 We utilize the GCC commands here to get the output. The first command is used to compile the code. After compilation, we have the second command to render the output. Here, you can observe the formatted date and time on the terminal screen.

In this example, we change the code. We utilize the two header files here, the “stdio. h” and the “time. h” header file. We explained both header files in the previous example. We have the “main()” function of the “int” data type. Then, below this, we declare the variable named “anytime” for the “time_t” and the “now” for the “struct tm”. We use the “time_string” of the size “64” and use the “char” data type for this. The address of the “anytime” variable is passed as a parameter to the time() function as “&anytime”. The “localtime()” function is used to initialize the “now” after which the “&anytime” is passed.

The localtime function is used to retrieve the computer’s time. The localtime() uses the time pointed to by anytime to populate a tm structure with the data that represent the current local time. The “strftime()” function is now utilized to display the time in this situation. The “strftime()” function is used here and we have the“%A” which represents the full weekend name, the “%B” represents the full month name, and the “%d” is to represent the day. The “%Y” is used to represent the year. Now, we want to display this day, month, date, and year on the terminal so we utilize the “printf” statement which renders all of them on the screen. 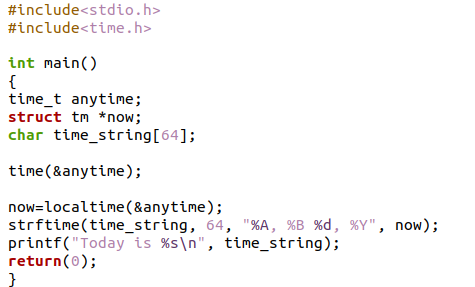 In this output, we again utilize both commands of the GCC compiler so it provides the desired output on the screen. We compile the code first, it is error-free, so we type the second command and the output is rendered in the following.  Look at the output in the following screenshot. You can see the full day name, full month name, date, and year on the screen. We get all these by utilizing the “strftime()” function in the C code.