The group by clause in SQL allows you to aggregate records into a set of groups as specified in the columns.

Let us discover how we can use the group by via multiple columns.

We can express the syntax as shown below:

Let us illustrate how we can use the group by clause.

Consider the table shown below: 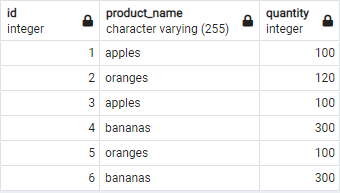 We can group the records by a single column, as shown in the query below:

The above query tells SQL to group all the rows with the same product_name into a single group. We then use the count function to determine how many rows are in that group.

The code above should return output as shown:

But what about grouping via multiple columns? Using the same table, let us group the data using the product_name and quantity columns.

An example query is provided below:

In this case, SQL will group the data if the values of both the product_name and quantity are the same.

The code above should return the query as shown:

In this article, we discovered how to use the group by clause and group by via multiple columns.