Speech recognition is a technique that converts the human voice to text. This is a very important concept in the Artificial Intelligence world where we have to give commands to a machine like a driverless car, etc.

We are going to implement the speech to text in Python. And for this, we have to install the following packages:

So, we import the library Speech Recognition and initialize the speech recognition because without initializing the recognizer, we can’t use the audio as an input, and it will not recognize the audio.

There are two ways to pass the input audio to the recognizer:

So, this time we are implementing the default option (microphone). That’s why we are fetching the module Microphone, as shown below:

But, if we want to use the pre-recorded audio as a source input, then the syntax will be like this:

Here the source is our microphone and the duration variable accepts integers, which is seconds. We pass the duration=10 that tells the system how much time the microphone will accept voice from the user and then closes it automatically.

Then we use the recognize_google( ) method which accepts the audio and covert the audio to a text form.

The above code accepts input from the microphone. But sometimes, we want to give input from the pre-recorded audio. So, for that, the code is given below. The syntax for this was already explained above. 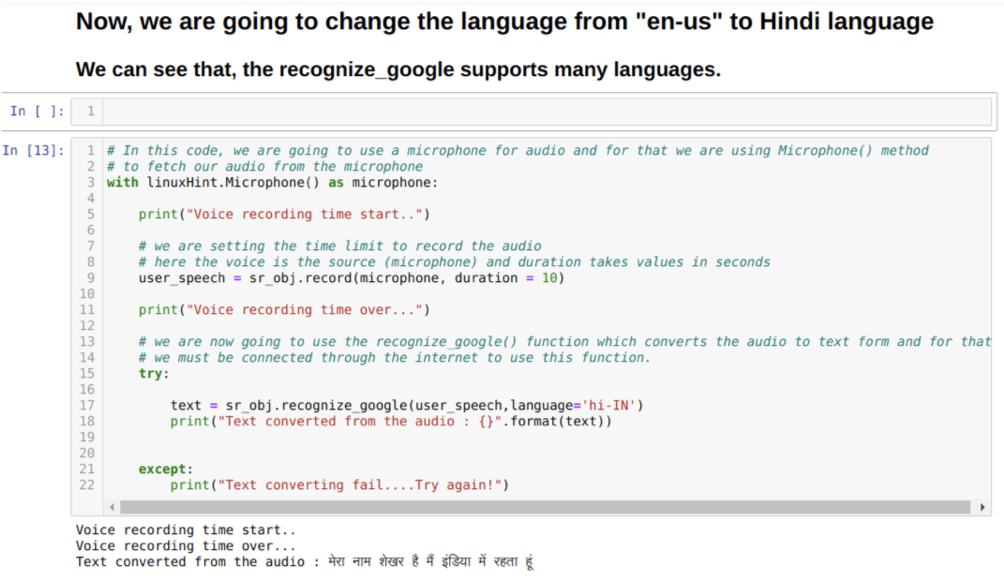