Perhaps on the server terminal, the number of current incoming requests is limited. If client incoming calls arrive quicker then the server may process data, the queue might become overloaded, and future incoming requests will be denied by an ECONNREFUSED exception. The size of this queue is provided as a parameter to the listen method. However, the setup will invoke its inbuilt limitation on packet size.

With packet terminal protocols (SOCK_STREAM, SOCK_SEQPACKET), utilize the accept() method. It accepts the first request packet for the receiving port, sockfd, from the queue of incoming requests, establishes a new associated port, and provides a new particular file for the connector. The freshly formed connection is not configured to listen. This function does not affect the primary terminal sockfd.

Syntax of the Socket Accept Function in the C Language

The accept() function contains different parameters, which includes sockfd, *addr, and *addrlen. The following are the specifics of these arguments:

The “sockfd” parameter is a port that was developed utilizing a socket, connected to a physical address by bind. But it is also waiting for entries after a listen.

The parameter “addr” is a “sockaddr” configuration pointer. The location of the peer port is determined by the networking tier and is given into this element. The socket’s IP class indicates the optimum syntax of the IP provided by the “addr”. Nothing would be loaded in when the parameter “addr” becomes NULL; “addrlen” has never been utilized in this situation and it will have to be NULL, as well.

The “addrlen” parameter is a valuation parameter: the receiver may configure it with the dimension of the structure referred to by the parameter “addr”, and it would provide the original size of the reference port. If the cache specified is too limited, the retrieved value will be trimmed. In this situation, the “addrlen” parameter will produce an output considerably larger than the value provided to the function.

Example of the Socket accept() Function in C Language in Ubuntu 20.04

We are going to write the program which demonstrates that the accept() function is delaying the call.

First, we import some required header files. The library <stdio.h> include the use of standard input and output methodologies. <sys/types.h> indicates different categories of symbols and frameworks, <sys/socket.h> deals with the functionalities of socket. Then, <netinet/in.h> specify the symbolized variable that will be applied as the destination node in the frameworks given to the function, and <string.h> deals with the different functionalities of string. Next, we define BACKLOG 3. It contains all of the vital factors needed to produce the integrated design.

Here, we call the main() function. Within the body of the main() function, we initialize some variables that are used in this program. We declare the structural pointer of variable “sockaddr_in my_addr”. For creating a socket, we will utilize the socket() method. Additionally, we have been binding with the help of the bind() function. And assign the value of the bind() function to the “b” variable. The bind() method contains different arguments. We have used a nested if-else condition in this instance. First, we define the condition of the “if” statement. If the value of the “b” variable is greater than 0, the printf() function prints the text “Binded Successfully”. 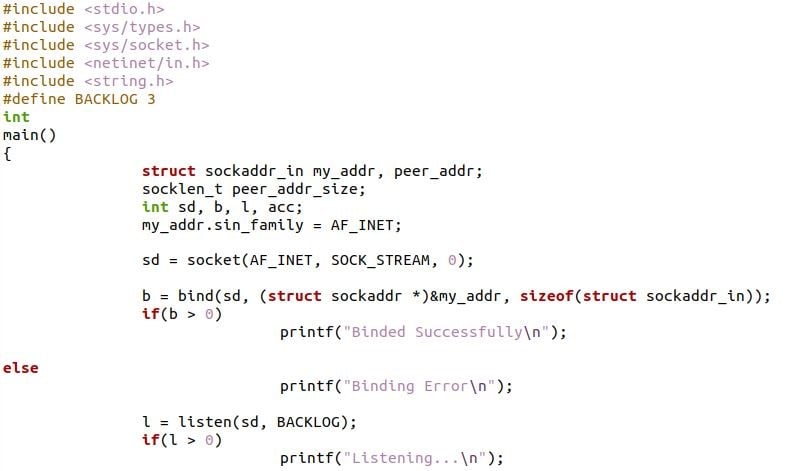 Similarly, to accept system requests, we have utilized the accept() function. Once again for this function, we will use the if-else condition. The value of the accept() function is stored in the variable “acc”. If the value of the “acc” variable will be greater than 0, we call the printf() method to print the line “Accepted”. Otherwise, we call the printf() statement to print “Not accepted”. So, in this way, we will terminate the code.

We receive this kind of output after running the previous code.

We have enclosed the socket accept 2 C function in great detail in this article. The accept() function is called to accept the system requests. We have to import different libraries before using the accept() function. This function holds parameters responsible for various functionalities. The system calls provide a particular file identifier for the received port if they are successfully executed. But, in case of error, the code shows the exception by printing -1. When a network connection is requested, an accessible signal is sent, and users will then use accept() to receive a port for this kind of connection.