What Is SNMP in Linux?

Before we explain what the snmpwalk command is, let us walk through the SNMP framework of the Linux operating system. SNMP stands for Simple Network Management Protocol. It is a protocol that monitors the network and is specifically designed for smooth and uninterrupted communication between several devices present on the network. It manages multiple devices available on the network. It is used to ensure that all nodes over the network stay up and running with uninterrupted communication and monitors the node’s performance. It is one of the topmost used networking protocols, and its snmpwalk command is considered a go-to method to scan multiple nodes at once. It also transfers messages from the SNMP manager to SNMP remote devices at every networking site.

How Does SNMP Work?

Before moving on to the snmpwalk command, let us understand how the SNMP framework of Linux works. The SNMP framework is deployed on the application layer of the OSI model and collects information from all applications that support SNMP. Various types of software use the collected to analyze the performance and health of every application on the network. Moreover, it monitors the devices on the network, captures any faults or problems, and fixes them, as needed.

What Is snmpwalk in Linux?

A snmpwalk is an application of the SNMP framework that is used to execute multiple GETNEXT requests automatically. It uses the GETNEXT command to query the SNMP-enabled devices like routers and switches, etc., to collect data from the network. The snmpwalk command troubleshoots the incorrect and missing stats for networking and other devices polled with SNMP by confirming the response of the communication between OIDs (Object Identifiers) and remote devices.

How Does snmpwalk Work in Linux?

It is an SNMP application present on the SMS (Security Management System) and CLI (Command Line Interface) that uses the GETNEXT query to collect information from the nodes on the network. An OID is given on CLI to specify which part of the object identifier will be searched by the GETNEXT request. It collects information from SNMP devices over the network and stores it on MIB (Management Information Base) to poll the SNMP agent.

How To Install snmpwalk on Linux

Installing a snmpwalk on the Linux operating system is incredibly simple. This command is available as a package for Linux users. However, the process of installing the snmpwalk depends on the distribution of your Linux OS. Here, we are using ubuntu 22.04, so we will install the snmpwalk on it using the following command:

Press Enter to execute this command. The “sudo” will give the root access to enable you to run the command. The “apt-get” is a CLI tool in Linux/Unix OS that works with packages and libraries. It performs any function like update, install, remove, etc. The “install” command will install the snmpwalk and all its related functions and other dependencies on our Ubuntu 22.04 system. Once the execution is complete, you will get to see this output result:

Parameters and Components of snmpwalk in Linux

Several parameters can be used with the snmpwalk command, such as -v, -c, timeout, community, hostname, -Os, and object_id. The “-v” parameter specifies the version of SNMP that you want to use. The “-c” parameter refers to the community string. The “hostname” parameter enables you to provide the SNMP agent name. The “-Os” parameter represents the last symbolic element of an OID. The “community” parameter refers to the type of read community. Finally, the “object_id” defines the object ID used to return all SNMP objects under it. You can use these few elements of the snmpwalk in the Linux operating system.

Let us move on to executing the snmpwalk command to see its result. First, we will get the options of SNMP by printing all the information using the “snmpwalk -h” command. Let us see the following command:

Here is the sample output: 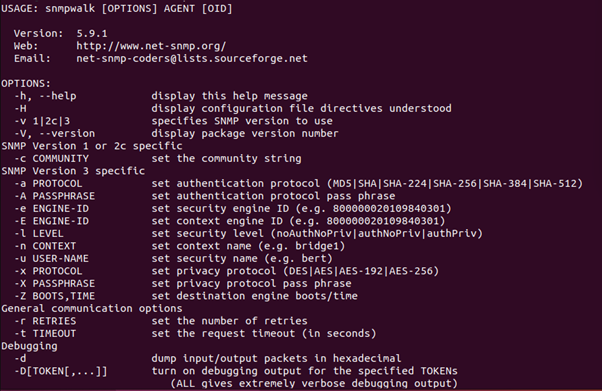 Here, the “snmpwalk” element of the command represents the SNMP application, the “-v1” element defines the version of SNMP, and the “-c” element defines the community string. Finally, the “127.0.0.1” is the public IP address of the IPS device. Now, let us check out the result of this command: 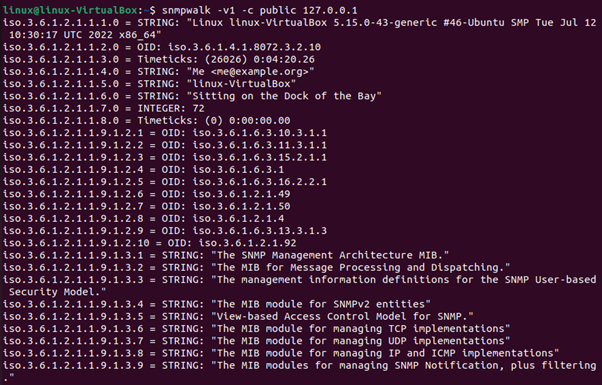 Note that snmpwalk returns a range of values from the SNMP agent. The command also returned the OID of the device, which is 3.6.1.4.1.8072.3.2.10. This is how you can walk through the node on the network using the snmpwalk command.