Sleep command is used to delay for a fixed amount of time during the execution of any script. When the coder needs to pause the execution of any command for the particular purpose then this command is used with the particular time value. You can set the delay amount by seconds (s), minutes (m), hours (h) and days (d).  This tutorial will help you to learn the use of sleep command by using different bash scripts.

You can use any integer or fractional number as time value. Suffix part is optional for this command. If you omit suffix then time value is calculated as seconds by default. You can use s, m, h and d as suffix value. The following examples show the use of sleep command with different suffixes.

Example-1: sleep command without any suffix

In the following script, sleep command is used with numeric value 2 only and no suffix is used. So, if you run the script then the string “Task completed” will print after waiting for 2 seconds.

Run the bash file with time command to show the three types of time values to run the script. The output shows the time used by a system, user and real time.

In the following script, ‘m‘ is used as the suffix with sleep command. Here, the time value is 0.05 minutes. After waiting 0.05 minutes, “Task completed” message will be printed.

Run the script with time command like the first example.

In the following script, ‘h‘ is used as the suffix with sleep command. Here, the time value is 0.003 hour. After waiting 0.003 hour “Task completed” should be printed on the screen but it requires more times in reality when ‘h’ suffix is used.

You can use sleep command for various purposes. In the following example, sleep command is used with while loop. Initially, the value of the variable n is set to 1 and the value of n will be incremented by 1 for 4 times in every 2 seconds interval. So, when will you run the script, each output will appear after waiting  2 seconds.

Example-5: sleep command in the terminal with other commands

Suppose, you want to run multiple commands and set the fixed time interval between the outputs of two commands, then you can use sleep command to do that task. In this example, the command ls and pwd are with sleep command. After executing the command, ls command will show the directory list of the current directory and show the current working directory path after waiting for 2 seconds. 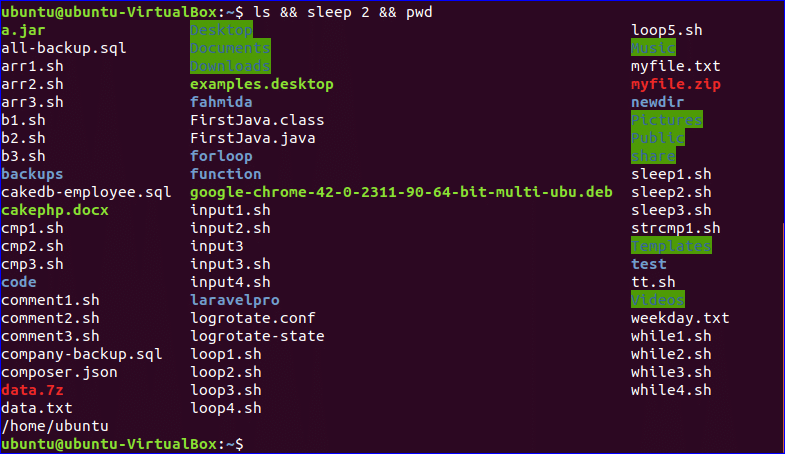 sleep command is used between two echo commands in the following example. Three time values will be displayed after executing the command.

sleep command is a useful command when you need to write a bash script with multiple commands or tasks, the output of any command may require a large amount of time and other command need to wait for completing the task of the previous command. For example, you want to download sequential files and next download can’t be started before completing the previous download. In this case, it is better to sleep command before each download to wait for the fixed amount of time.