Bash is indeed an interpreted, interactive language, and how much space to reserve in advance does not have to be known. It is also possible to make ready a new array dynamically without declaring it or extending a previously defined array to include further entries. Still, multidimensional arrays aren’t supported by bash, and we can’t get array components that are also arrays. Fortunately, multidimensional arrays can be simulated. This article will provide some illustrations of the simulation of an array of arrays in a bash script.

We have an example of simulating an array of arrays using the simple method. Let’s start demonstrating how to load a user-defined m x n table with random numbers (that aren’t random, because each column will at all times have a similar number in each run on most of its rows, but that does not apply to the question), and print it. When we work on either a bash that you do have, bash version 4, the below script would certainly work efficiently. We should not solitary declare 0; that is more like a perfect solution to values being accepted vigorously. We have declared an array with the “-A” keyword.  If we don’t define the associative array using -A, the code may not work for us. The read keyword is then used to read the user’s input, which is rows and columns of a table. Then we have used two “for” loops for the incrementation of rows and columns of a table. In for loop, we have been making a two-dimensional array. In the next for loop, all the values of an array have been displayed.

When you run the bash file, it will ask a user to enter rows and columns as “m” and “n”. After that, for loops will generate a two-dimensional table as below.

Taking the same instance, we can emulate the arrays using hashes. However, we have to be more careful about leading zeros and several other stuff. The next explanation is working. However, the way out is very far from ideal. We have been taking rows and columns manually. For loop is used to make a matrix. Then we have been using hashes to emulate the two-dimensional array. At last, the array will be printed out as below. 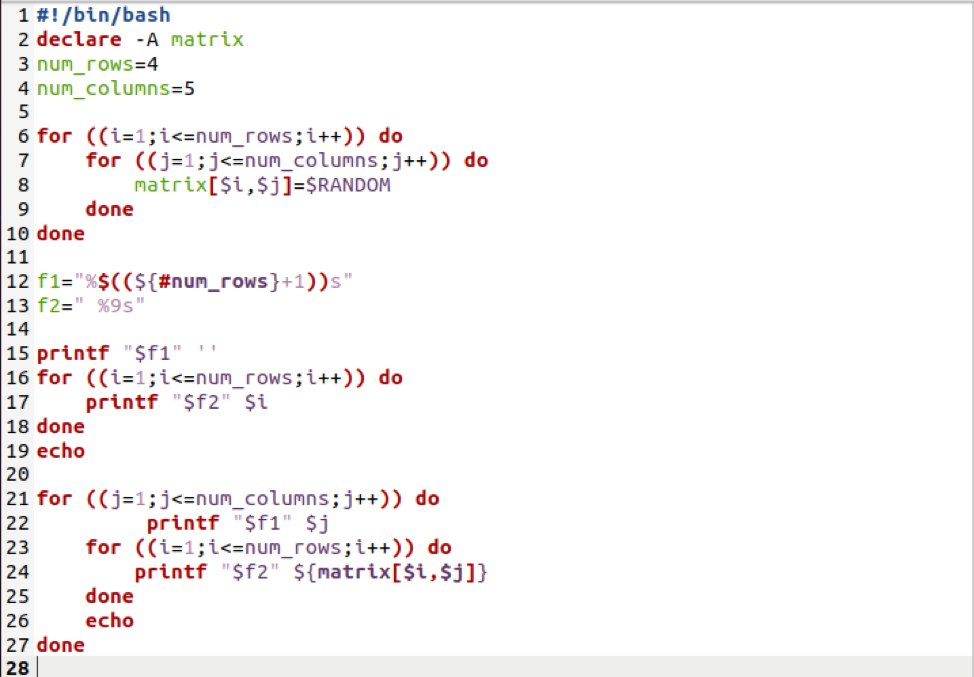 Execute the file “input.sh” in the bash shell using the bash command. You will find a table with rows and columns number mentioned.

You can see the output as a two-dimensional array while running the file. If we ignore the “declare -A arr” line, the echo statement may display (2 3) rather than (0 1), since (0,0), (1,0), and others may have been used as a mathematical expression and calculated to 0 (the value at the right side of a comma).

In bash, it is a frequent issue with referencing arrays inside arrays that you’ll have to construct name-references using declare -n. That name afterward -n serves as a name ref for the value allocated (after =). Currently, we handle this variable only with attribute name ref to extend as though it was an array and extend the appropriately cited array as beforehand. Let’s have an example of name refs. We have successfully declared two arrays. After that, we have assigned both the arrays to another array as a member. We have used for loop to make a two-dimensional array. We have made another variable to add the one-by-one values of the array “group” into it for comparison. Deep down, it will go to members of inner arrays “bar” and “foo” to take values and compare them while printing the message.

When we execute the file “input.sh”, you will see the below output. The variable “lst” has values of inner arrays within the array “groups”.

Only now, I’ve stumbled into it. There had been a fairly straightforward approach that worked for everyone. To show a main map for the system, I decided to use an array containing a device name and a screen location. We have to concatenate the title of the unit and the corresponding location of a display into some single string, using only a delimiter, which we assumed will not occur in either of our values (in my case, I used .). And I used a “cut” keyword to split the concrete values into their components if necessary. There may be a clearer and easier approach to do it, though, and this is only to illustrate that in a sense, in bash, we can build a multidimensional array, although it does not help it. After that, you have to print both the device name and its location separately after creating the substring.

Let’s run the bash “input.sh” file. You will see the separated device and its location in the shell prompt as while execution. The solution works using the cut command.

Let’s take a little longer example to emulate a multidimensional array. In the load_alpha() function, all the alphabets will be loaded into the array. After that, the print_Alpha() function is declared and used to print out all the alphabets in the row-major order as a matrix or two-dimensional format. On the other hand, we have been using the rotate() function to rotate the array. Let’s try this example in the bash shell to see results. 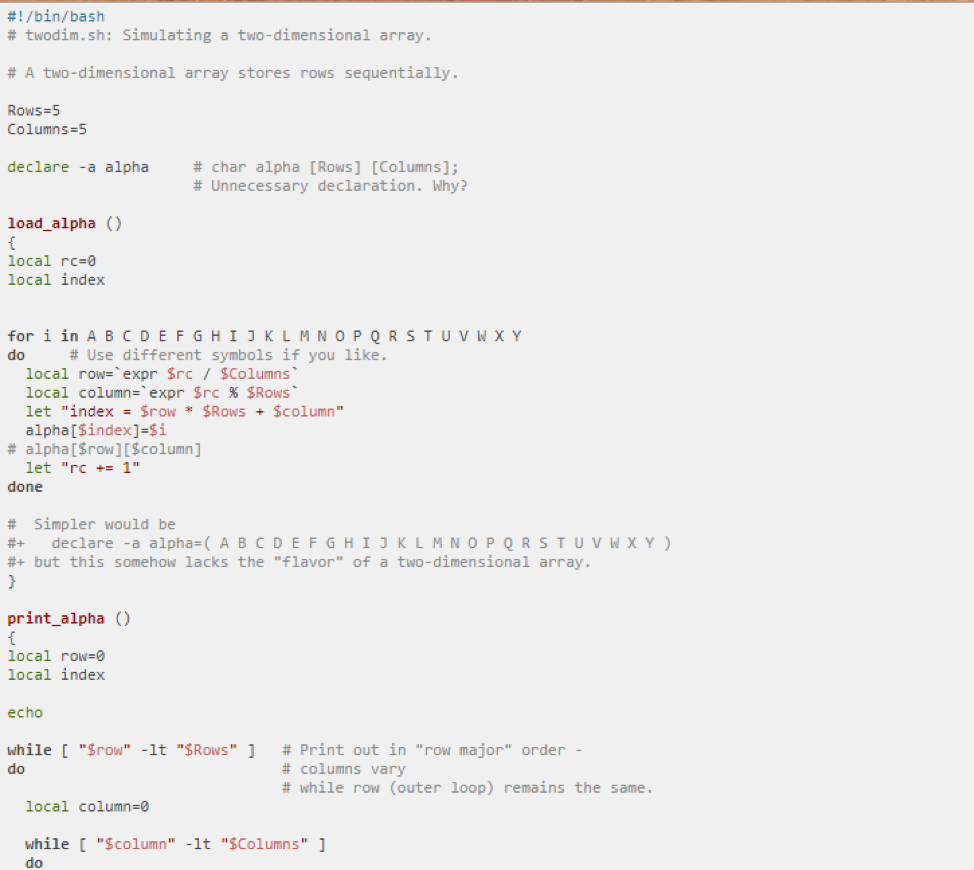 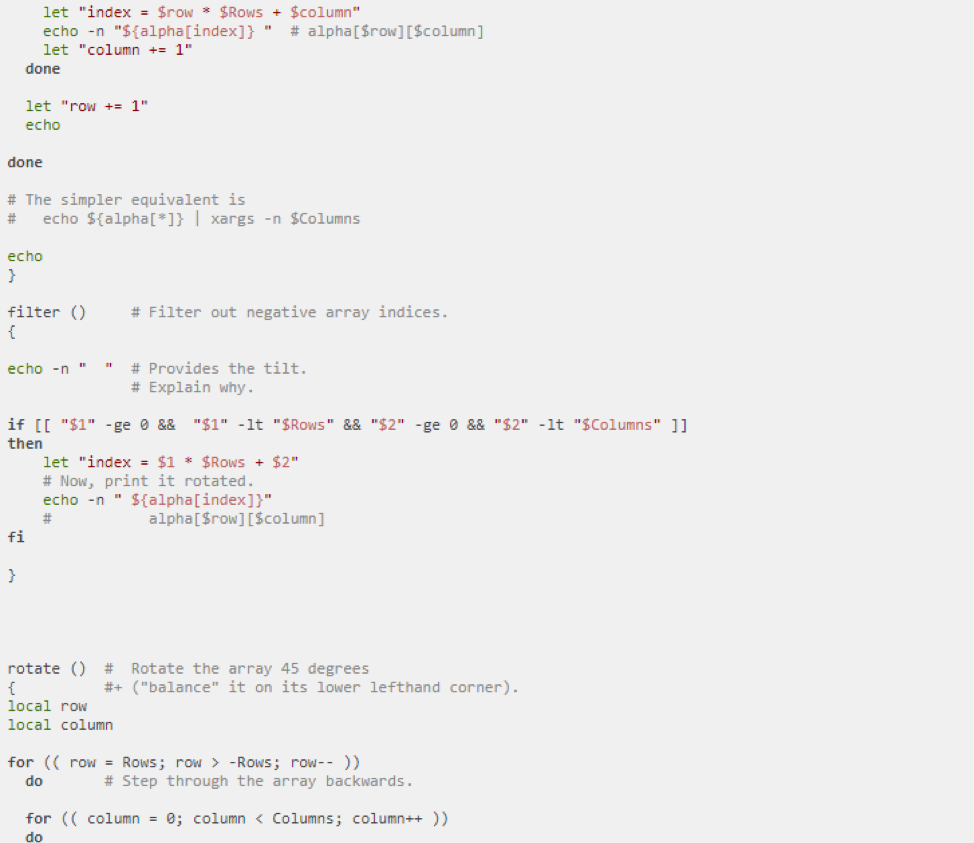 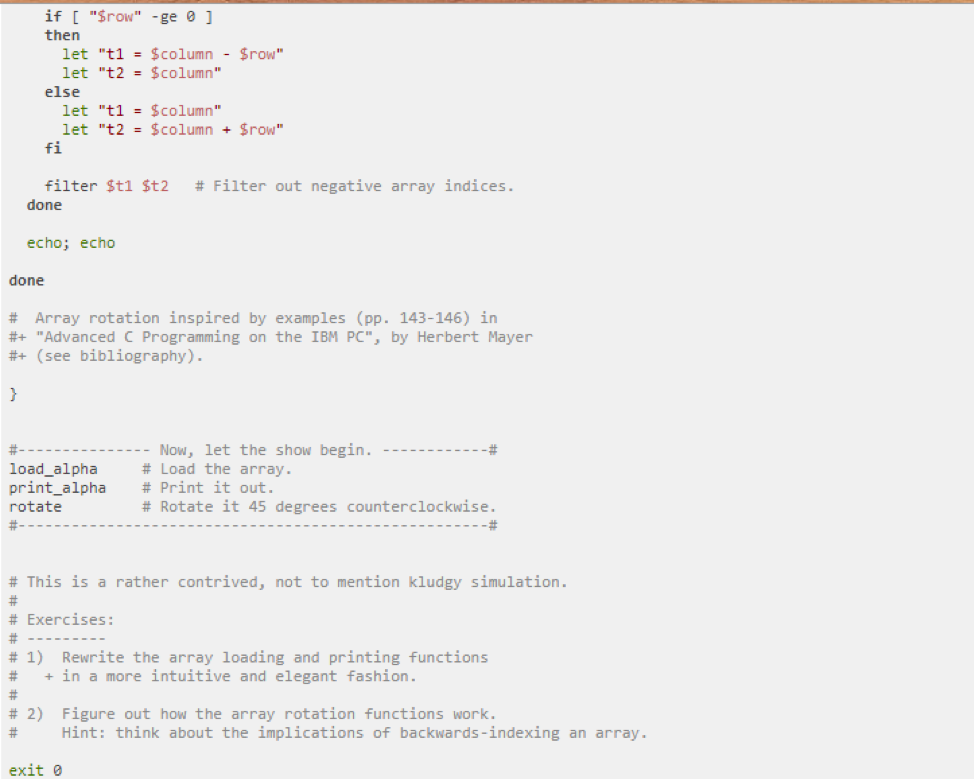 While execution, we have found a very beautiful structure of multidimensional array in the bash shell as below 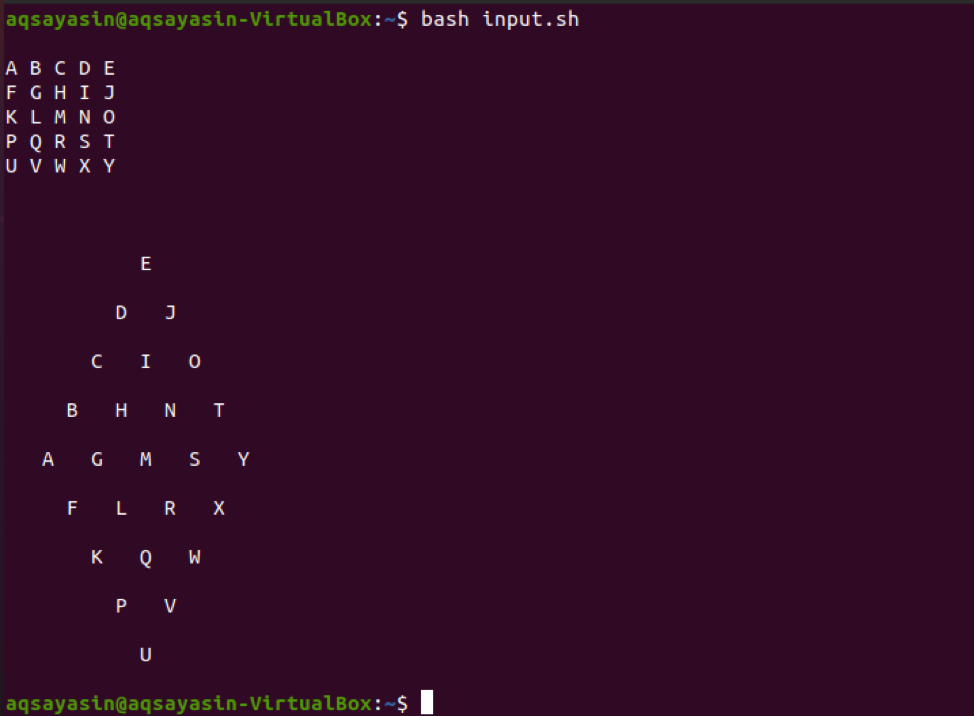 We have successfully tried some examples for simulating arrays of arrays in bash. I hope it works!